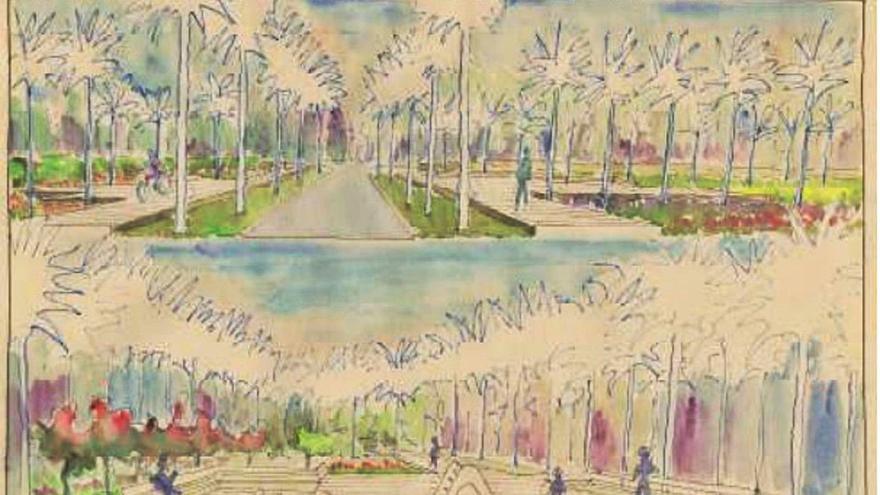 The government team (PSOE and Compromís) has started the process to hire a company for 650,000 euros to be in charge of this Rastoll orchard recovery project, with the purpose of improving the image of an entrance area to the city from Alicante. To do this, rows of lost palm trees will be replanted that will serve to connect the orchards in the south and north. The other intention is to provide the neighborhood with a green space provided for by the General Plan but which is being used as a parking lot.

The idea is that it ison a plot of 4,500 square meters, located next to the «Creu del Terme», opposite Candalix avenue, it recovers the essence of the past. The project, directed by the municipal architect Julio Sagasta and Rafael Baeza, foresees an area paved with marble of 1,800 square meters, an area of ​​earth terraces of 1,300 square meters and 150 meters of bike lane, separated from the circulation with hedges, which It will join the one on Bassa Els Moros with the one on Avenida Juan Carlos I. In addition, they will limit a minimum width for the passage of vehicles, similar to the one that exists now, and will separate road traffic from pedestrians who will have wide sidewalks in the garden.

State in which the plot is located, where a hundred cars are currently parked. | ANTONIO AMORÓS

The green area will also be closed with a wall on Avinguda de Candalix to cover the vision and noise of cars from the terraces. In order to avoid vandalism and graffiti, virgin vines or other climbing species will be planted on the wall. With all this, the City Council plan to structure this garden in two different zones: a soft one with topsoil that reproduces the structure of the terraces and the palm trees of the orchard that existed there based on some images from the 1930s.

Inside the terraces they want to plant ornamentally species that were traditionally found on agricultural holdings, such as pomegranates, orange or almond trees.

Son much shorter species than palm trees and that generate vegetal masses of different colors at different heights.

The paved area will be raised slightly to contemplate the orchard-garden from a privileged perspective. In that space an oak (holm oak) will be planted and some benches will be installed. Thus, the government team intends to recall the usefulness of providing shade and rest to the walkers who circulated along the old road to Alicante.

There will be three types of soil: stone tile pavement from Cabezo; asphalt for the road between Antonio Antón Asensio street and Candalix avenue; and trowelled concrete for the sidewalk going down to the right of the Antonio Antón Asencio valley.

They will also install and reinforce lighting where there is a great sense of insecurity at this time. Likewise, there will be an irrigation network.

The plot is triangular in shape and It is bounded by Candalix street (old driveway to the city from Alicante) and the extension of Martín de Torres street. It is crossed in a north-south direction by the extension of Calle Bassa dels Moros.

After the disappearance of the Facasa factory and the construction of seven-storey housing blocks in its place, a barrier of buildings has remained in the area between the orchards in the north and the orchards in the south. Very close to this site, as indicated by the City Council on a map, there are numerous historic orchards cut down over the last hundred years. This plot is located on a disappeared orchard, forming a boundary between the city and the ring of orchards that surrounds it. And so, the transformation of this enclave full of history, aims to complete an urban void in the short term.

Half a year of works paid for with European funds

The Rastoll orchard works will take place over six months. The City Council just a few days ago started the bidding for this project and now the companies have twenty days to present their offers.

The action will be financed 50% by the City Council and the other part will be paid by the European funds Edusi. Elche has received 15 million euros since 2017 from Europe to undertake actions in the city until 2023, committing the municipal coffers to pay another 15 million.