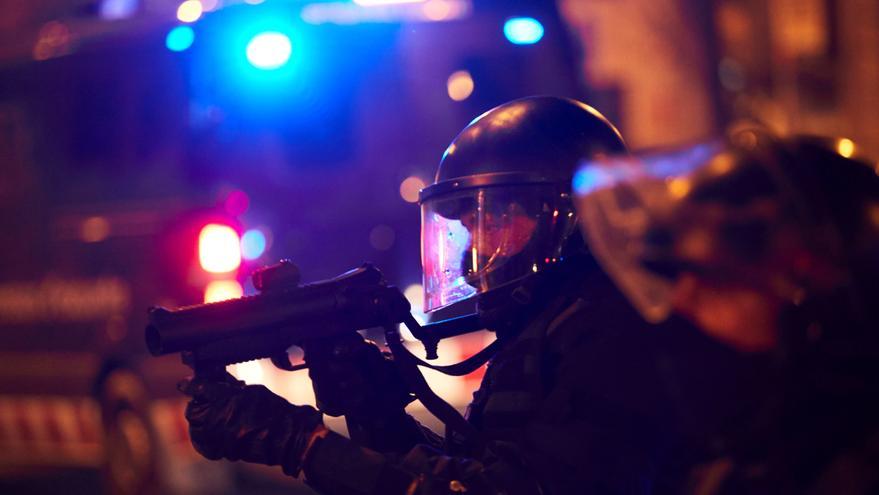 The protests by Pablo Hasel have revived the old debate on public order in Catalonia: with foam bullets in question because of their harmful potential, the alternatives on the table range from indiscriminate dispersal methods, such as water or sound cannons, to dissolution of riot control.

The acting Interior Minister, Miquel Sàmper (JxCat), has urged this week to reform the Catalan public order model, in full negotiations for the formation of the Government, which the CUP is subject to the elimination of the Mossos mobile brigade.

With the Catalan police trapped again in political storms, the unions of the Mossos close ranks in defense of their management of the disturbances, while the human rights entities warn that, more urgent than reviewing the model, it is to reinforce the control and sanctions for malpractice in the body.

Injuries caused by a projectile of foam (precision viscoelastic projectiles) A protester, who has lost the sight of one eye in a protest in favor of Pablo Hasel, has now targeted this type of ammunition, which became widespread in the Mossos after the ban on rubber balls in 2014 , since they bounce and have an uncertain path.

The mobilizations of October 2019 by the judgment of the process They only fueled fears about the damaging potential of foam: four protesters lost their vision in an area where the Mossos fired those projectiles, although it has not been possible to rule out that they were injured by the rubber balls thrown by the National Police.

In the parliamentary commission that would eventually ban rubber bullets, the then chief commissioner of the Mossos and now a senior, Josep Lluís Trapero, already defended in 2013 that the public order model in Catalonia, based on the progression of force and specialization of its units, was “technically” the most suitable.

In fact, sources from the body defend, it is a pioneering plan in Spain that foresees a gradual use of dispersal tactics, always preceded by a public address warning: hold on inside the vans and start the intervention only when it is necessary to maintain the police line, disperse violent people or avoid a massive throw of objects.

The first resource is the use of defenses –option that forces a melee with the protesters– and then we turn to precision projectiles and the firing of shotguns, without ammunition but causing alarm due to their loud noise.

Another controversial technique used by riot police is “carousel“, in which the trucks are moving at full speed to break up a demonstration, with the consequent risk of being run over, and the use of pepper spray.

In the riots of October 2019, the Mossos resorted, for the first and only time, to the water tank, which is reserved to open the way between the barricades, when the situation is about to overflow, while the sound cannon, capable of dispersing due to the thunderous noise it emits, is only used to broadcast announcements of immediate action over the public address system.

As pressing as review dispersal methods It is, according to human rights entities, to strengthen the mechanisms to prevent and punish malpractice among riot police and ensure that they are used only in moments of real risk, not as a reaction or punishment to provocations.

Social movements have waged a battle of years up to achieving that the riot control has an easy to remember identification number visible on the vest and helmet, in order to facilitate investigations in cases of police abuse.

Now they ask that it be done public the instruction that regulates the use of foam projectiles to see if it complies with international standards, which establish that it should only be shot at the lower part of the body – below the abdomen – and to neutralize people who put the integrity of others at risk.

The design of the police devices visible in the demonstrations is another of the resources that Interior relies on to avoid altercations, due to its possible dissuasive effects, although experience confirms that shielding the protests with riot control does not always prevent incidents rather, it often turns them on.

The most drastic deployment is the so-called “encapsulamiento“, in which a cordon of agents surrounds the protesters and accompanies them throughout the march to prevent isolated groups from splitting up and causing disturbances, although the proximity of the police officers tends to unleash high tension in the environment.