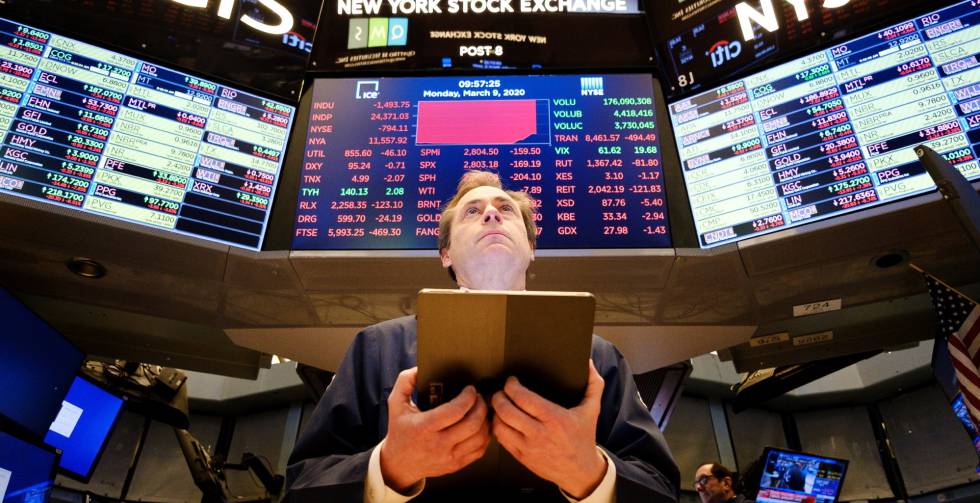 The moods of the markets have become more changeable than the seasons: the forera spring that has catapulted the shares of the video game company GameStop, the AMC cinema chain or the technology BlackBerry can give way to a winter that deflates the momentum of small investors as stocks fall and checking accounts lose zeros. The last sessions add important crashes in the stock market bets that have made them famous, with GameStop and AMC falling almost 40%, which has widened the doubts among their members. Both in the forum and in the recent Telegram groups and Twitter profiles to which they have extended their tentacles taking advantage of the notoriety, which attract more than ten million followers, a word resounds urging not to panic: “Hold! Hold!” (keep). It is accompanied by one of the group’s sacred mottos: diamond hands, an expression with which they call to keep calm in the middle of the vertiginous price variations. Few responded to the request this Tuesday, a full-blown rout. Whoever invested 10,000 euros in the GameStop peak last week has about 3,000 euros today.

For every man for himself, the most optimistic, still licking their hands at the unprecedented pulse that has lost billions to Wall Street bear funds, insist there will be new opportunities. Will it be the new normal to see how the little ones become one more player in the market, or are they just a passing wind? David Pascual Ezama, a professor at the Complutense University who is an expert in economic behavior, does not predict a great future for them. “If there are large funds that are organized to destroy companies and bankrupt companies, it would be sensational if there was a digital social movement that is organized to do the opposite, to give value to companies that are attacked by the bears. However, I am pessimistic about it. Maybe in the short term. Perhaps from time to time, but the powers that be will ensure that politicians legislate to prevent these movements from taking place against their speculative interests ”.

Will this phenomenon last?

PIMCO’s Geraldine Sundstrom believes it is unclear how long the commotion and aftershocks will continue. The fund manager, one of the largest in the world, warns that the blow from foreros is not limited to the small group of stocks that they targeted, but that there were collateral effects throughout the market. “Short sellers, once faced with such losses and a single portfolio item overflowing their fund capital, have no choice but to liquidate other portions of the portfolio to get cash and pay the loss.” That sparked a flurry of selling in stocks for no other reason than to provide liquidity to bear funds. In addition, the most conservative investors exited the market due to volatility, generating new sales.

Social networks are in the spotlight. They have been used to light the fuse of very diverse political movements. The Arab Spring, the outraged Spaniards, the protests against Turkish President Erdogan, or the street riots in Brazil to demand better public services are some examples. They have also served to coordinate boycott actions such as the one Donald Trump suffered at a rally in Oklahoma, whose seats were reserved online by Tik Tok users and K-pop fans without intention to attend. Only to leave the then president speaking to a half-empty auditorium.

But network users have so far tiptoed through the financial industry. Stock exchange forums have existed for years as a meeting place where small investors exchange ideas and learn from each other. But a coordinated action of this magnitude had never been developed. Two factors have been essential in its success. First, the size: not just any forum is capable of moving an action. WallStreetBets, with more than eight million members, can. And second, the chosen objective: any attempt to move the price of giants such as Apple, Amazon or Google would culminate in a resounding failure, but the high presence of bears at GameStop caused the onslaught to cause a stampede to cut losses that was decisive for the purposes of the foreros.

The Sevillian Enrique Moris, 27, trader A professional who teaches Stock Market courses, he was one of those who took advantage of the volatility to make intraday operations at GameStop, in which he claims to have taken out more than 3,000 euros. Do you think these groups will continue to disrupt the market? Are they here to stay as a long headache for bearish investors? “In my opinion there are arguments to think yes and no. On the one hand, the GameStop phenomenon has caused many people to organize themselves to try to move stocks, and they will continue to try despite all the barriers that the SEC may put up. [el regulador del mercado en EE UU] or the Robinhood broker by blocking purchases. They have seen that they have made a lot of money and that will cause a draw effect. But on the other hand, this case has occurred in a specific scenario where there were a lot of hedge funds betting short against GameStop. And as a result of seeing everything that has been organized on Reddit, several of those funds have announced that they will no longer publish or operate their shorts. Such an idyllic setting for it to germinate again will rarely occur because the large institutional funds will be more careful if possible with everything they do ”.

Market mood swings are abrupt. After the euphoria over the stock market victory, doubts now surface. And on Reddit they try to prevent panic from being the next sentiment in the cycle of strong emotions instigated by the peculiar army of small investors that has become Wall Street’s nightmare by simply moving their savings held at home by the pandemic at the same time. .