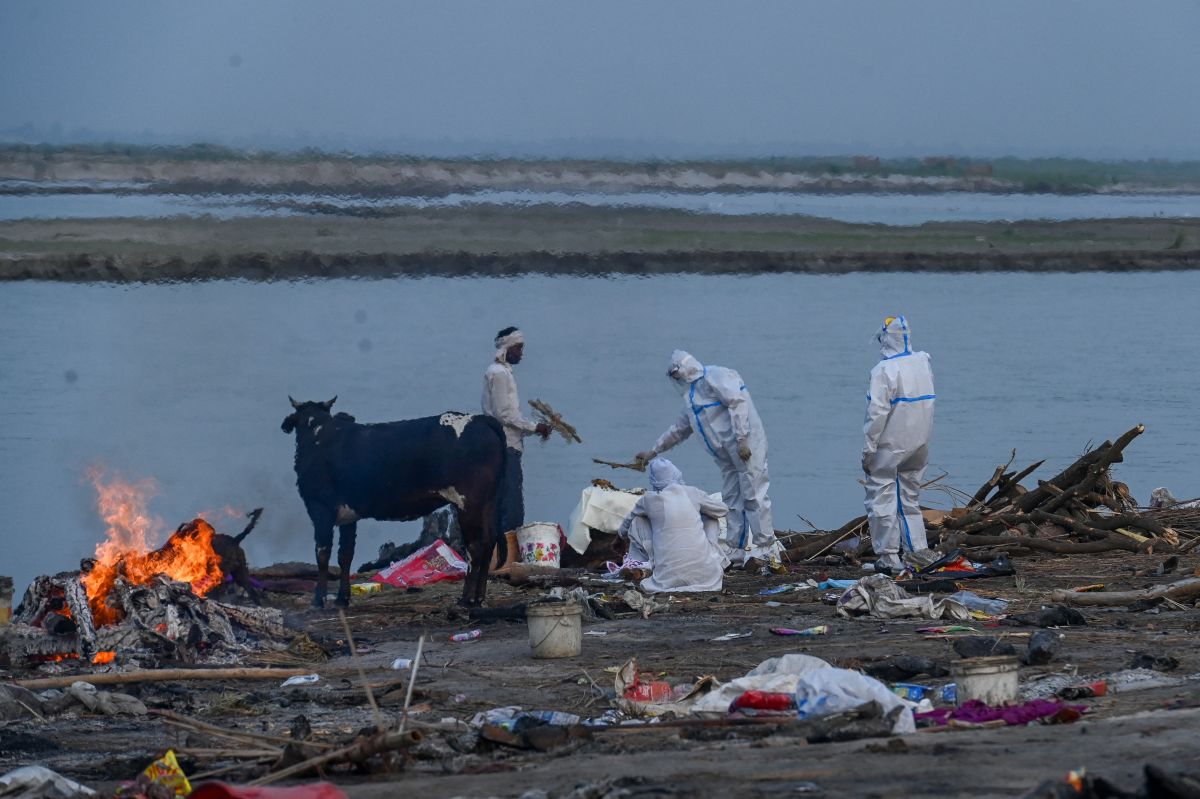 India is experiencing a health crisis due to the high number of COVID-19 infections, and as if that were not enough, given the intense rains generated by the flood of Ganges River, countless graves of coronavirus victims have been uncovered.

In recent weeks, the rising Ganges River, the largest in India, has exposed the graves of dozens of people who died of coronavirus and were buried shallow on the banks of the river.

The events are recorded in the state of Uttar Pradesch.

Dozens of bodies float in the Ganges river

And it is that those graves were in the vicinity of the famous and important Ganges River, which has further aggravated the health crisis in India, which is fighting to stop infections and deaths from COVID-19.

The new drama in the Asian country produced new cremations on the banks of the Ganges River and fuels suspicions that deaths from the pandemic exceed one million.https://t.co/FhBxyToyeB

According to what was published by the AFP agency, hundreds of bodies were buried in the vicinity of the Ganges River, in the face of the wave of deaths derived from the coronavirus in the country.

The scenes are impressive, since the bodies float on the water and have had to be recovered to incinerate them and avoid a greater focus of infection.

They estimate that there are up to 600 bodies

Neeraj Kumar Singh, Allahabad City Official, reported that approximately 150 bodies have been cremated so far, since they were exposed by the flooding of the river.

“We are not exhuming any bodies, but only those that are floating are being cremated due to the rise in the water level.”Said the Indian official.

Rising river water level #Ganges ravages the scant layer of soil that reveals shallow graves of people suspected of being killed by Covid and others wrapped in cloth, near a crematorium in Allahabad, #India 🇮🇳. #Photos: Sanjay Kanojia pic.twitter.com/7pMo4RJUgM

But that number may increase, said the official, since the water is bringing up the bodies that were buried in those graves in the vicinity of the river, and that now due to the rising water there may be more bodies.

#India | The seasonal flooding of the Ganges River is exposing shallow graves and exposing some of the hundreds of bodies buried during the recent wave of COVID-19 infections in India. pic.twitter.com/WeaQd4Xjs0

“The area stretches for a kilometer and we believe there are between 500 and 600 bodies buried,” said Kumar Singh.

“All necessary precautions are taken when treating the bodies while performing the final rites,” said the Indian official.

Flood of #rioGanges on the #India exposes #tombs of hundreds of #dead for #Covid https://t.co/RJ28Zphij9

In addition, he assured that there are around 25 people who work day and night “on this front.”

Navneet Sehgal, spokesman for the state government, said that by a local tradition, the bodies are buried on the banks of the river, ”according to what was published by the Reuters news agency.

In addition, they highlighted that in fear of being infected, many families threw their dead directly into the river, and now with the flood, they have come afloat.

#EnteratEnEje📹 | The increase in current and water level removes the layers of the soil, revealing hundreds of #corpses allegedly buried during the #pandemic from #Covid19 in the # ríoGanges. pic.twitter.com/vbLlUIfcPh

India is the second country most affected by the coronavirus, only after the United States, adding 18,420,598 infections and 513,474 deaths from COVID-19, according to the count of the Johns Hppkins University.

– A woman walks the corpse of her baby in a stroller, she killed her because she had “a beast chip on her head”

–After XV years party, they die of COVID-19, the mother of the celebrated and 7 uncles in Argentina