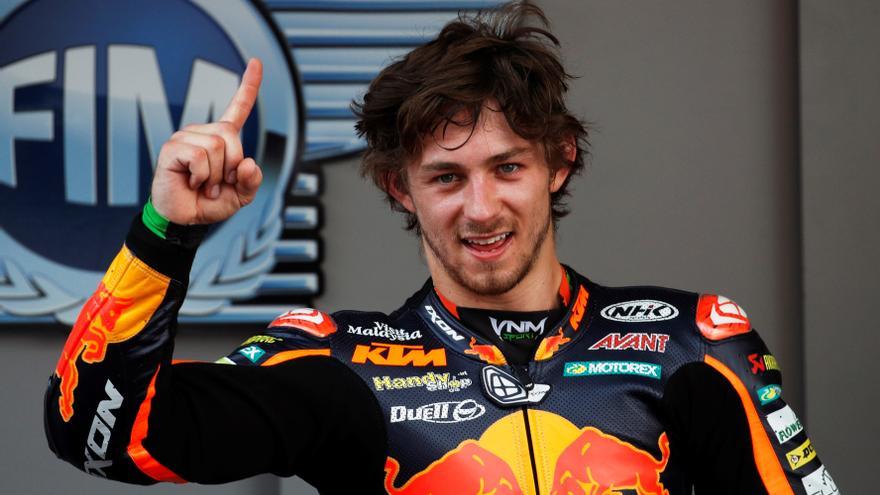 The australian Remy Gardner (Kalex) added his fourth win of the season and hit the table to extend his lead at the head of the provisional Moto2 World Championship standings, by winning the British Grand Prix at the Silverstone circuit.

Gardner now has 231 points, 44 more than the Spanish Raul Fernandez (Kalex), who could not add a single one at Silverstone after suffering a fall, and 52 points compared to Marco Bezzecchi, which was second in the British race.

The Italian Marco Bezzechi (Kalex) acted as leader at the time of the start, as soon as the traffic light went off, but the British Sam Lowes was clear that he wanted to be a prophet in his land and in just two curves he had already placed leader, ahead from the Italian and from the Spanish Jorge Navarro (Boscoscuro) and Raul Fernández (Kalex), with the world leader, the Australian Remy Gardner (Kalex), fifth.

Thus they concluded the first round, in which the group stretched out and watching the Australian Gardner advance two positions by beating his teammate Raúl Fernández, who was also overtaken by the Italian. Fabio di Giannantonio (Kalex), and Jorge Navarro.

Bezzecchi regained the lead on the second lap, albeit with Lowes and Gardner stuck in their wake and with a group of seven pilots who had taken the lead over the rest of the peloton, in which Spaniards Xavier Vierge (Kalex) and Arón Canet (Boscoscuro) were trying not to lose contact.

In the leading group were Bezzecchi, Lowes, Gardner, Navarro, Di Giannantonio and the two Fernández, Raúl and Augusto, somewhat off the hook -almost a second-, and with the rest of the pilots already more than three seconds away.

Remy Gardner decided to take action on the fifth lap, in which he overtook Bezzecchi to lead the race, although shortly after the Italian returned the overtaking and the Australian did not hesitate to do the same moments later, while it seemed that Sam Lowes was a little off the hook and the front quintet began to break down.

The world leader commanded the race without excessive problems in the following laps, although with Bezzecchi, and Lowes glued to him, and a few meters behind. By Giannantonio y Navarro.

The Italian Bezzecchi regained the first position in the eighth lap and it was then that a first change of pace occurred to which only Gardner and Lowes were able to respond, while Navarro and Di Giannantonio lost a few meters and that is in the twelfth lap the Australian returned to the head of the race and starred the fastest lap of the race, which Jorge Navarro snatched from behind in his attempt to regain ground. One twist later new fastest lap record for Gardner and Lowes.

The situation was heating up little by little as the end of the race approached and with Jorge Navarro already hooked to the leading trio, Remy Gardner managed to break a turn later to be left alone in his fight for the victory with Bezzecchi, while Navarro surpassed Lowes to try to reach the two escapees.

Behind, the Spanish Raúl Fernández (Kalex) was left out of the race when he suffered a fall in the fifteenth turn, at turn thirteen, which dismounted him from the competition and left him unprecedented in the championship points table, in which He kept the second position but now his advantage over the Italian Bezzecchi is practically non-existent (eight points) and Gardner distanced himself widely.

Jorge Navarro achieved a creditable third place, his first podium of the season, with which he broke a streak of poor results -their last podium dates from Valencia in 2019- and falls throughout the year, after withstanding the attacks of local Sam Lowes, who had to settle for fourth place.