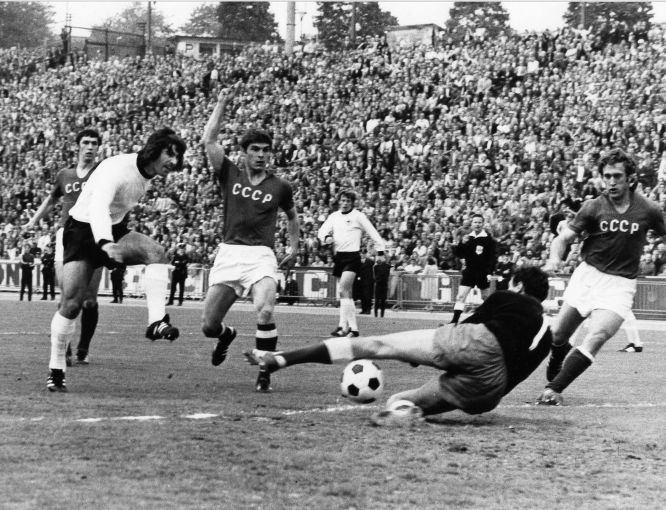 “4-ever Gerd” (Forever Gerd). This was the message that Robert Lewandowski showed on his shirt on May 15 when he scored his 40th goal of the season and equaled Gerd Müller’s legendary record that had lasted from the 1971-72 season. It was the particular tribute of the player and Bayern Munich to their great legend.

A week later the Polish forward surpassed the figure with a goal in the last minute against Augsburg. “I am convinced that Gerd would have done the same in my place. The records are to be broken. The one that I don’t think will ever be beaten will be the one with 365 goals in 427 games that is also in his power. It’s impossible, ”Lewa commented after the game. A perpetual recognition of the Torpedo par excellence: Gerd Müller (Noordlingen, Bavaria, 75 years old) died this Sunday at dawn, as confirmed by Bayern, after a long fight against Alzheimer’s that was diagnosed in 2008, although it was in 2015 when his club of a lifetime made it official.

Today, the world of FC Bayern stands still. The great German champion and his entire community of fans are dismayed by the loss of Gerd Müller, who died at dawn on Sunday at the age of 75.

On November 3, the date of his 75th anniversary, statements by his wife, Uschi, to the daily Bild already foreshadowed the worst. “He spends almost 24 hours in bed, he only wakes up for moments, he goes slowly towards the afterlife while he sleeps. It’s beautiful when you open your eyes a little and manage to say yes or no by flicking an eyelash. He is calm and at peace, I think he has no pain. He eats practically nothing, just swallows some puree. Sometimes we watch television together, even though he no longer understands anything ”.

Uschi and Gerd met in a bar when she was 16 and he was 20 and they married in 1967. In his heartfelt words, Uschi recalled that before the coronavirus he visited Gerd every day at the clinic where he had been hospitalized for more than five years. but that in recent months his presence was no longer possible. “Just a year ago everything was different. I was also able to take him to the ice cream parlor, but since the covid I couldn’t visit him. I don’t think he suffers. I just hope that he cannot reflect on his fate and his current conditions. “

His football legacy does deserve a good handful of reflections. The least German German striker is the best scorer in the footballing history of his country. From his 176 centimeters, his short legs, his wide thighs, his low ass, his plump body and his privileged mind to be in the right place at the right moment, the shot and the goal had no secrets for him. His recording records, some of which are still valid, define his stature as a universal striker. But Der Bomber der nation, (the nation’s bomber) as it was known in its land, was much more than numbers.

The words of his former partner and friend Franz Beckenbauer now sound more resounding than ever. “Thanks to his goals, Bayern reached the international level at which they still play. He is the most important player in the history of the club. I’m sure people will continue to talk about Gerd Müller 100 years from now ”.

His race to the top was not easy. His physique was always an obstacle. He entered Bayern in 1964 and his file read that in a match with his hometown team he had scored 22 and that that same season he reached 180. However, the then Bayern coach, Croatian Zlatko Cajkovski, I looked at him with eyes of incomprehension. He nicknamed him Little Chubby. “How am I going to put an elephant among my thoroughbreds, are we into weightlifting?” Gerd didn’t flinch. He dropped from 93 to 73 kilos and took over a starting position that he never lost until retirement.

The area was the living room of his house. Seven times the Bundesliga’s top scorer, 723 goals in 771 official matches; 68 at 62 with Germany. Top scorer of the World Cup in 70 and Euro 72. His life was the auction. With the right, with the left, with the head, with the calf, with the heel … With whatever.

His first great international appointment was Mexico 70. He did not arrive as the undisputed starter. He was blocked by the fireproof Uwe Seeler, nine years his senior. Based on goals, of course, they shared eleven and even a room. Müller shot up to 10. No one has scored so many in a World Cup since then. One against Morocco; three to Bulgaria and Peru; one to England and two to Italy in the extension of the most beautiful semifinal. Four heads, one penalty, three in the small area and two in the big one.

“I did not think”

“He scored so many goals because he didn’t think. He had no prescription. It was just my hobby. He finished without thinking. If I had, I would not have scored even half ”, he used to comment. One of his coaches, Dettmar Cramer, surrendered to his conditions. “Finish faster than I can think.”

In 1970 he was elected Ballon d’Or, he won the Golden Boot (38 goals) and it was ensured that he signed a contract with Barcelona, ​​which was not finally executed because his wife did not want to leave Munich. The Catalans ended up signing Cruyff.

Over time he learned to move through hostile territories without losing scoring efficiency. He knew how to protect the ball, unload and turn around before the turn marker could react. In short distances he was fast. His low center of gravity and the power of his legs helped him to anticipate in the final meters. He was attacking the ball, he was not expecting it.

His career chained individual and collective successes. He won everything that can be won both with Bayern and with the national team. His was the winning goal in the 74th World Cup final against the Netherlands (2-1). In 2012, 40 years later, Messi surpassed his goal mark in the calendar year. Müller had scored 85 (72 with Bayern and 13 with Germany) and the Argentine jumped to 91 and sent the German player a signed shirt in recognition of his career.

It was not well understood in Germany that he voluntarily left the national team after the apotheosis of the World Cup 74 at only 29 years old and his departure from Bayern in 79 did not even seem logical. Possibly the reason was that he could not bear criticism: “It is slower than a phone booth ”, it was written.

He had a problem with alcohol. He recovered after being admitted to a detox clinic in 1991. His health was damaged. The hazards of the trade took their toll on her hips and she soon had symptoms of vision and memory loss. His life was turned off. Not his legacy: the goal.