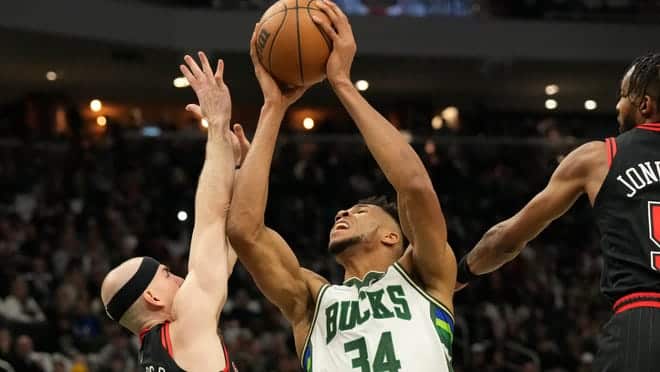 Everything looked ready as the Milwaukee Bucks began their quest for back-to-back NBA titles.

Fiserv Forum had a different energy before Game 1 on Sunday against the Chicago Bulls. There were white “Built for This” towels draped over every seat and a palpable playoff buzz in the arena that felt edgier than the 41 regular-season games.

The Bucks also started like they were keyed up on adrenaline. But all that energy soon dissipated and Milwaukee had to fight for a 93-86 victory in a slugfest despite 27 points and 16 rebounds for Giannis Antetokounmpo.

Milwaukee had dropped five of their last six Game 1s in the playoffs, winning only last season’s playoff opener against the Miami Heat in a series that ended in a sweep.

This matchup appeared to be lopsided soon after the opening tip.

The Bucks ripped off the first nine points of the game. When Antetokounmpo dribbled into a three-pointer at the top of the key, Chicago coach Billy Donovan called a timeout just 1 minutes, 33 seconds into the action.

Milwaukee’s lead in the first quarter ballooned to 32-16 when Bobby Portis drained a three-pointer.

Antetokounmpo had a double-double by the opening minutes of the second quarter.

The opening adrenaline soon wore off and Milwaukee’s shots started clanging off the rim after going 14 for 26 (53.6%) in the first quarter.

The Bulls trimmed the lead down to 44-39 when Zach LaVine hit a three-pointer and then two free throws.

Also Read  Julia Roberts on waiting 20 years to star in a rom-com: 'If I'd thought something was good enough, I would have done it.'

The Bucks took a 51-43 lead into the locker room after Antetokounmpo made 1 of 2 from the charity stripe with 0.1 of a second remaining in the second quarter.

Antetokounmpo had 17 points and 11 rebounds in the first half. Brook Lopez added 11 points. Jrue Holiday and Khris Middleton combined to shoot 4 for 16 over the first two quarters.

The Bucks kept trying to hold off the Bulls. Chicago got to within 53-49 early in the third quarter before Middleton drained a three-pointer. A triple from LaVine made it 57-54, but Milwaukee’s Wes Matthews answered with his own three.

Chicago finally tied the game at 64-64 when Sasha Vucevic nailed a three-pointer at the 4:40 mark of the third quarter. The Bulls stretched that run to 13-0 to take a 69-64 lead on a floater by Coby White. That ignited the Bulls fans who infiltrated Fiserv.

The Bucks fought back by scoring the final six points of the third quarter to take a 74-71 advantage. Portis drained a three-pointer from the left corner and Antetokounmpo converted a three-point play after an acrobatic layup. Antetokounmpo had 27 points and 12 rebounds through three quarters.

LaVine picked up his fifth foul 1:22 into the fourth quarter. Antetokounmpo got whistled for No. 5 a few minutes later on an offensive foul.

The teams lapsed into a three-minute scoring drought until Holiday dropped in a layup for a 77-74 lead with 7:07 remaining.

Vucevic gave Chicago the lead again at 78-77 a few minutes later and Antetokounmpo checked back in. Holiday countered with his first three-pointer after missing his first three attempts.

That kickstarted an 8-0 run that included a three-point play from Lopez and a midrange jumper from Holiday that made it 85-78 at the 3:58 mark.

The Bulls didn’t make it easy, getting to within 87-84 on a jumper from DeMar DeRozan. Then Alex Caruso was left alone under the basket for a layup.

Lopez used his size advantage again, dropping in a close jumper while getting fouled. He missed the free throw and the Bucks led, 89-86, with just over a minute remaining.

Vucevic missed a shot a close range, but then forced a turnover by the Bucks. LaVine missed a long three-pointer with 29 seconds left and Holiday nailed two free throws to seal the victory.

Lopez added 18 points and Holiday 16 for the Bucks.

Vucevic led the Bulls with 24 points and 17 rebounds.