Ukraine tensions have continued to dominate the market narrative, with bonds and safe haven currencies in strong demand, while stock markets have sold off. Tech stocks in particular have been vulnerable to the renewed bout of risk aversion and the USA100 future has lost -1.0% so far. Treasuries, which already rallied on Friday on Ukraine headlines, have wall earlier losses and are now down -1.0 bp at 1.93%.

Russia’s FM Lavrov proposed to President Putin to continue diplomatic measures, including talking to the West, according to news wire headlines. Putin reportedly said “all right.” That’s seen the markets reverse course. Yields are edging higher as demand is unwound for now, with equities paring losses. Treasuries are now under water with the 2-year 4.8 bps higher at 1.546%, with the 10-year up 1.6 bps at 1.954%. European rates are still in the green but off their best levels. The Bund is 6 bps lower at 0.227% and the Gilt is down 3 bps at 1.51%. US futures are either side of unchanged with the Dow in the green.

Gold prices have climbed in recent sessions on the heightened Russia-Ukraine tensions, especially after the US warned of an invasion on Wednesday. Spot is about $4.50 higher at $1866.29. That’s the highest since mid-November. It was at $1791 at the end of January. Prices did ease slightly on the firmer Dollar, as President Putin agreed to continue to pursue diplomatic efforts, While the Fed’s Bullard reiterated his hawkish stance for 100 bps of rate increases by July 1. But the dip seems that found buying pressure. Gold is expected to maintain its luster on a more defensive posturing, especially as inflation is expected to remain hot over the next several months on supply chain issues.

Also Read  For UConn, a Rougher Path Than Usual Still Leads to the Final Four

Hence looking ahead, the prospect of rising yields should undermine interest in non-interest baring barrels and some have warned of a possible correction as geopolitics aside gold demand seems to defy fundamentals.

Fed’s Bullard continued to call for 100 bps in rate increases by July 1 in a CNBC interview. He believe the Fed needs to “front load” rate hikes given the climb in CPI over the last several months, but reiterated he will defer to Chair Powell. He said he was not reacting to just one month’s data but to the four month accumulation of reports from October -January that called into question the view that inflation was going to moderate within some reasonable timeframe. The big picture is that inflation by any measure is much higher than expected and the Fed needs to act. He noted the market has done a lot of work, but the Fed also needs to follow through and do its part, including reassuring people it will defend its inflation target and bring inflation back to 2%. The FOMC can act in an organized way and not be disruptive to the markets. He reminded the Fed will only be “removing accommodation” and so is still maintaining an accommodative stance.

The Fed will need to be nimble in its policy response in this environment. He looks for a reopening growth effects again in Q2 and Q3 as Omicron fades. Bullard reminded his position that he is not that different, he only added 1 more hike to his prior forecast. He wants the balance sheet runoff to begin in Q2 and would like to see it steepen the curve if possible. But the Committee has not come to a decision on tactics. He stressed we have a long way to go before we become restrictive.

With respect to geopolitical events and the potential for war in the Ukraine, he said it is a more near term concern for Europe. It is an important policy issue, but for now he does not see it as a macro policy issue for the US currently.

European energy prices have jumped this morning and European gas prices topped $88, with the region deemed to be most at threat of supply disruptions against the background of Ukraine tensions. Crude has dropped back from the highs seen on Friday, but remains elevated with the March contract currently at $93.29. USOIL had rallied to levels last seen in September of 2014 on Friday, topping at $94.65. The latter could be treated as a strong resistance level for the asset. 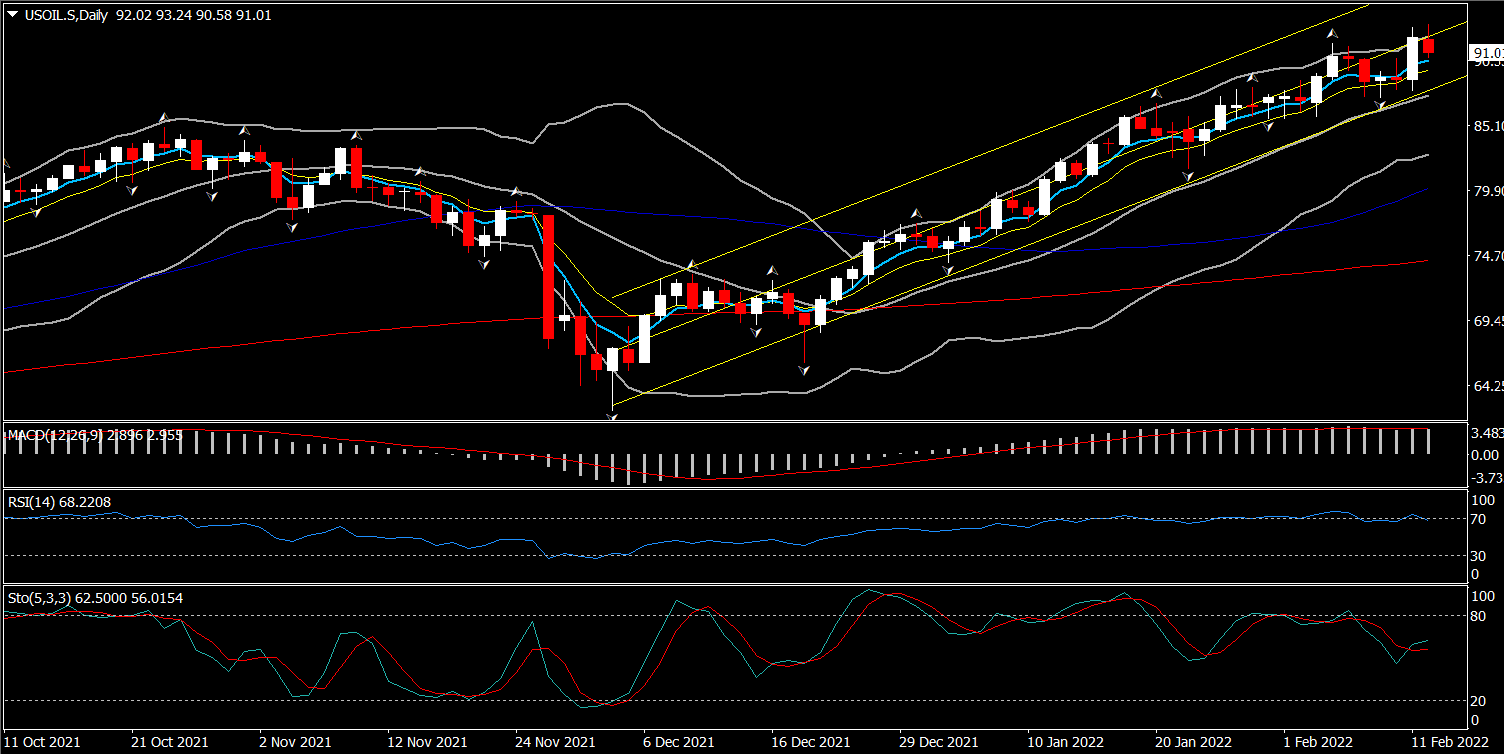