An Indiana Republican senator has come under fire after telling reporters that the Supreme Court’s 1967 ruling striking down laws banning interracial marriage was wrong and the decision should be left to the states.

Senator Mike Braun, 67, made the controversial remarks during a media call on Tuesday.

Braun was asked if he was okay with the Supreme Court hypothetically overturning landmark rulings such as Loving vs. Virginia – which found that laws banning interracial marriage violated the 14th amendment.

‘Yes,’ he replied. ‘If you are not wanting the Supreme Court to weigh in on issues like that, you are not going to be able to have your cake and eat it too. It’s hypocritical,’ Braun answered.

When pressed by the reporter again, and asked if he felt the same way about Griswold vs. Connecticut, a 1956 SCOTUS ruling that allowed married couples to use contraceptives, he reiterated his prior answer.

Braun said: ‘You can list a whole host of issues, when it comes down to wherever they are, I am going to say they are not going to all make you happy within a give state.

‘But they’re better off having states manifest their point of view rather than homogenizing it across the country as Roe vs. Wade did.’ 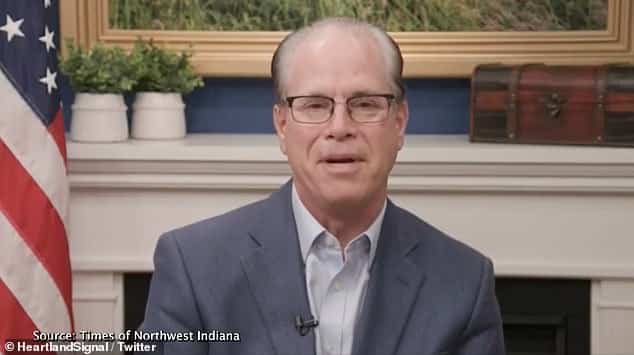 ‘When it comes to issues, you can’t have it both ways. When you want that diversity to shine within our federal system, there are going to be rules, and proceedings, that are going to be out of sync with maybe what other states would do.

‘That’s the beauty of the system. And that’s where the differences among points of view in our 50 states ought to express themselves. And I’m not saying that rule would apply in general, depending on the topic, but it should mostly be in general, because it’s hard to have it on issues that you are just are interested in when you deny it for others with a different point of view.’

‘Mike Braun’s words and views are not only un-American, but beneath any respectable person wishing to hold public office,’ Schmuhl said.

‘The United States Supreme Court has affirmed many times that marriage equality in our country extends to any committed couple regardless of sex, race, orientation, or religious affiliation, and to question that legitimacy questions the very fabric of America and its people.’

His comments sparked outrage in social media, with users questioning why he was asked at all to weigh on the subject of interracial marriage.

‘Did I just get dropped into the year 1850? When did the legitimacy of interracial marriages become a right wing talking point?’ user Alan Winnikoff tweeted.

‘So not only are they coming for same sex marriage but interracial marriage too? So who do birracial get to marry? Or are they going to ask permission based on the state they live in?’ another outraged user wrote.

Braun unsuccessfully attempted to distance himself from his questionable stance just hours after the conference call, despite restating several times throughout the interview that he believed fundamental rights issues such as interracial marriage and abortion should be left to the states.

‘Earlier during a virtual press conference I misunderstood a line of questioning that ended up being about interracial marriage, let me be clear on that issue…’ he said in a statement, Slate reported.

‘There is no question the Constitution prohibits discrimination of any kind based on race, that is not something that is even up for debate, and I condemn racism in any form, at all levels and by any states, entities, or individuals.’

During the call, Braun claimed that in order to have diversity ‘shine within our federal system,’ there had to be rules and proceedings out of sync, and that was ‘the beauty of the system.’

‘And I’m not saying that rule would apply in general, depending on the topic, but it should mostly be in general, because it’s hard to have it on issues that you are just… interested in when you deny it for others with a different point of view,’ Braun went on to say.

Braun, who has been in office since 2019, has also shared seemingly anti-trans comments before.

‘Girls’ sports should be for girls, and allowing biological males to compete with them robs female athletes of a chance to compete and win,’ Braun tweeted on Monday.

‘I’m disappointed Governor Holcomb vetoed a bill to make this law in Indiana, and I support a veto override to protect women’s athletics.’

When Mildred Loving, a black woman banned from her rural Virginia hometown for marrying a white man, wrote to U.S. Attorney General Bobby Kennedy in 1963, she never imagined that she was about to change the course of American history.

Kennedy referred Mildred and Richard Loving’s case to the American Civil Liberties Union, and in 1967, eleven years after the couple had been exiled from Virginia for violating the state’s anti-miscegenation laws, the U.S. Supreme Court struck down legislation that prohibited interracial marriages.

Nearly 50 years after the landmark ruling, the quiet, working class Lovings are showcased in the film, ‘Loving,’ out in U.S. theaters on Friday.

Behind every cause are the people that fight for something they believe in, and in this case, the Lovings’ unwavering devotion to one another was what inspired writer-director Jeff Nichols.

‘We stop thinking about the humanity at the center of these things, and that’s what Richard and Mildred show us,’ he said.

They return to their home to live quietly under the radar, but the police are tipped off and the Lovings, who are expecting their first child, are arrested and given a suspended prison sentence on the condition that they leave Virginia.

The film centers on the Lovings’ quiet daily lives, with little dialogue between the couple, but their discomfort living in cramped quarters in a noisy big city and their desire to go back to Virginia is the catalyst for their case.

The Lovings ‘weren’t standing on podiums shouting and inciting crowds. They were literally kind of pushed through an already open door; they weren’t kicking it in,’ said Joel Edgerton, who plays Richard Loving.

The Loving vs Virginia case was cited in arguments for same-sex marriage, which in 2015 was made legal across the United States.

‘They changed the legislative nature of the judicial system, they changed the American constitution, they paved the way for a lot of people’s lives,’ said Ruth Negga, who plays Mildred Loving.

‘I don’t think anyone should ever think that their voice is too small or too quiet, because this couple shows it’s the exact opposite,’ she added.