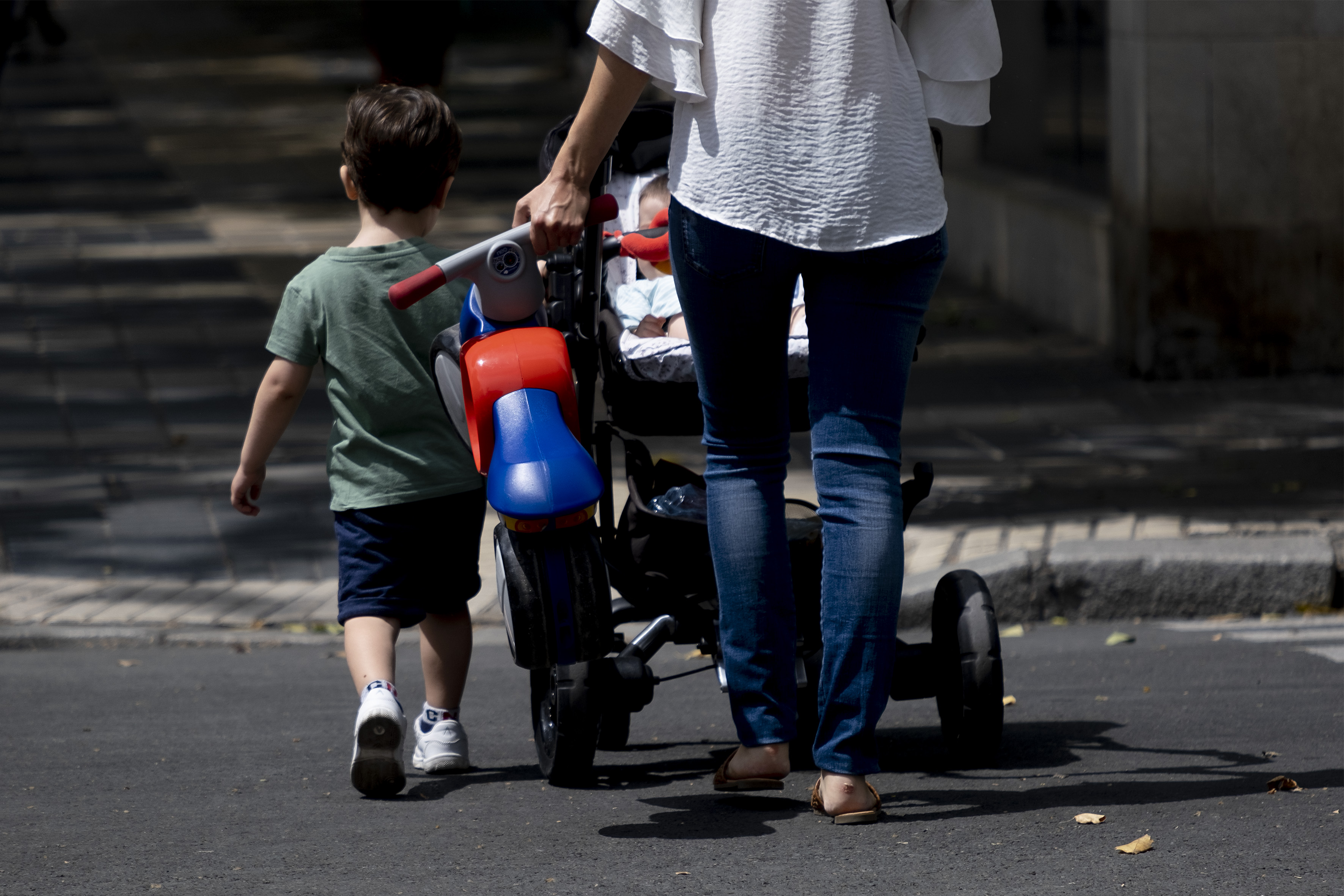 Before the pandemic, it was already difficult to care for and have a paid job. Then it became (almost) impossible. How to hold two such huge things at the same time? In a year we have seen the seams on an already frayed system. A system that little or nothing supports those who have fewer threads, which always leaves them on the verge of breaking. “Single-mother families have been among the most affected in the pandemic,” says Carmen Flores Rodríguez, president of the Federation of Monomarental Families FAMS. Since the pandemic began, many mothers have had to choose between continuing to work or taking care of their children. Other women have not even been able to consider this dichotomy. According to the study Gender and Poverty: social determinants of health and access to social and health services for women, produced by EAPN, 81.1% of the almost two million single-parent households are headed by a woman. “It is a highly feminized, impoverished and therefore vulnerable type of home.” This is what Graciela Malgesini, head of political advocacy and European affairs for EAPN, for whom one of the most serious consequences of the pandemic falls on single-mother homes, which do not have solid economic and social support. “Mothers with single-parent households have much more difficulty reconciling and accessing the labor market, which leads them to end up with much lower wages than men and to be much more exposed to poverty. The pandemic has caused a differential crisis: 87% saw their personal situation worsen due to their employment situation and 27% claimed, from that first moment, not being able to meet food expenses. Mothers’ rates of stress and mental fatigue skyrocketed, with the psycho-affective consequences that this has on minors in the medium and long term ”, he explains.

For Marta Seiz Puyuelo, PhD in Political and Social Sciences and researcher at the UNED, it is important to remember that the so-called MECUIDA Plan, in force until December 2020, consisted of a total or partial reduction in working hours with an equivalent reduction in income. A measure that “could hardly be a viable option for families with only one parent, who are often dependent on a single salary.” According to Seiz, in addition, teleworking is not possible in all jobs, something that further complicates their situation because “outsourcing care through hiring paid services can also be particularly difficult in many of these families, given its high cost in relation to the salary of a single parent ”.

Lucía (fictitious name) knows about these difficulties in the first person, who together with her 6-year-old daughter forms a monomarental family by choice. He works for an essential services company in which he has a reduction in working hours due to a legal ruling, since his company denied it up to two times. Since the start of the pandemic, he has not been able to take advantage of any labor flexibility measure: “During confinement I lost count of the drafts that I had to use to cover those first days. I ended up asking for a 100% reduction to be able to stay at home with my daughter, ”she says.

Raquel Villalobos is also a single mother by choice of a 4 and a half year old girl. She works in the advertising department of a local newspaper and has a small reduction in hours that allows her to organize herself better. “My daughter and I live alone, but we are close to my parents, my brother and my sister-in-law. They are all very helpful. Also, I have friends who are very supportive, ”he says. Although he recognizes that he spends the day on the run to be able to organize work, school, extracurricular activities and his daily tasks, despite this logistical support, he points out the economic issue as one of the most complicated aspects. “I like to give my daughter the same comforts that I have had and many times it is complicated with a single salary. I have had to reduce my working hours to be able to reconcile and the pay drop is noticeable at the end of the month ”.

Will the Co-Responsible Plan improve the situation of single-parent families?

On March 9, the Council of Ministers approved the call Co-Responsible Plan, a promising support for families with children up to 14 years of age consisting of the possibility of accessing a public network of caregivers (and caregivers). The objective, according to the Ministry of Equality, is to facilitate the reconciliation of families that are in the most unfavorable situations, so that priority will be given to “single-parent families, victims of gender violence and other forms of violence against women, women in a situation of long-term unemployment, women over 45 years of age or family units in which there are other burdens related to care ”.

The plan will begin next April with the distribution of 190 million euros to the autonomous communities and will have two formulas to facilitate these professionals: creation of a bag of care at home or in public places with “guarantees of labor dignity” . According to the Secretary of State for Equality and against Gender Violence, Noelia Vera, in this way “a new public policy” is inaugurated that makes the State jointly responsible for the care of minors for the first time. Vera has stressed that, in this first year, the most important thing is that such care begins to be provided urgently, given the difficulties of conciliation derived from the pandemic.

According to Graciela Malgesini, the underlying philosophy of the plan corresponds to that advocated by EAPN Spain in numerous documents, studies and policy proposals, in which they highlight the need to increase public funds aimed at protecting families, especially the vulnerable , and the urgency of addressing the especially difficult situation faced by single-parent households: almost half are at risk of poverty and social exclusion according to the Report AROPE on the state of poverty in Spain. However, Graciela Malgesini is concerned about the criteria with which the distribution of funds will take place (the criteria presented seem to be eminently demographic / geographical), since they do not refer to the AROPE rate or rate of risk of poverty and social exclusion, for what EAPN demands that this aspect be reviewed.

Although the plan can benefit single-parent households, the reality is that this is a plan that is not directed only at these types of households. For this reason, EAPN demands that there be homogeneous criteria to access these bags of home care, regardless of the territory. “Currently there are communities that have very advanced the definition of family diversity and have already established policies, while there are others that have not worked on this aspect, or have done so partially, without considering -for example- a legal definition of single parenthood, ”says Malgesini.

Platforms such as FAMS and EAPN Spain have long defended the need to have a State Law on Single Parent Families that allows them to advance in childhood rights and equal opportunities by providing support and protection to this family model and avoiding, according to Carmen Flores, “the multiple discriminations that exist today.” Among the changes they request are the tax reform, the equalization of leave for birth, breastfeeding and sick care, the guarantee of access to housing, employment or education and the reform of the requirements for access to public services and the different protection systems that include the specificity of these families.

Carmen Flores is prudent when assessing the impact of the plan on single-mother families, since she believes that it should be thoroughly analyzed to know if it will really be effective. “Many times they have good intentions, but the monomarental reality is not taken into account, and when it comes to accessing resources they talk about homes or coexistence units (people who live in the same home) and forget who they really are single-mother families, as is the case of those more vulnerable who, due to their economic situation, are forced to live with other people and share a house or rent rooms to survive ”, he explains.

Marta Seiz, for her part, sees an improvement in the creation of a public care network because she considers that all the measures that put care in value and at the center in our society are fundamental: “Care, from our first day on this world to the last, they are an essential part of life and indispensable to guarantee the rights of people and the proper functioning of society ”. For Seiz, if the Co-Responsible Plan is progressively extended to all population groups that need it – including two-parent families with minors or households with other care needs – it can have a very important impact in this regard. The doctor in Political and Social Sciences also recognizes that, although co-responsibility in care in the public sphere is a very important step, we cannot forget the need to continue promoting co-responsibility within homes. “Any conciliation measure should be directed and accessible equally to women and men, since it is essential that the latter are fully involved and assume that they have the same responsibility as women when it comes to caring. A good part of the difficulties of reconciliation or of correctly attending to care needs, as well as the disproportionate impact that these currently have on the health and economic vulnerability of caregivers (usually women), would be considerably mitigated if this co-responsibility between men and women it was a reality ”, he concludes.