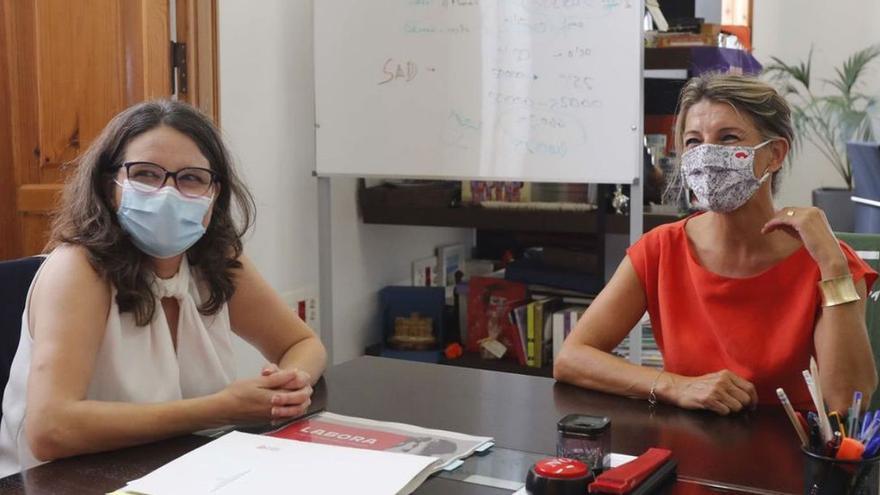 The attendance poster is powerful, since together with the vice presidents of the Consell and the Government, Mónica Oltra and Yolanda Díaz, they will meet the mayor of Barcelona, ​​Ada Colau; the spokesperson for Más Madrid in the regional Assembly, Mónica García, and the leader of the Movement for Dignity and Citizenship of Ceuta party, Fatima Mohamed. But the list of absences also draws attention, especially in the world of Compromís, the coalition led by Oltra.

The event is organized by the Poble València Initiative, the vice-president’s party (although she is not part of its executive) but it will be significant to uncheck the most visible faces of the coalition, all of them militants of Més, the old Bloc, such as the Catalan Ombudsman, Fran Ferri; the general secretary, Àgueda Micó; the spokesperson in Congress, Joan Baldoví, or the Minister of Education, Vicent Marzà. None are planning to attend. Neither did the other Minister of Més, Rafa Climent. The party confirms that its representation will be the Secretary of Organization, Amparo Piquer; the regional leader in Valencia and deputy in the Corts Papi Robles and the head of the area of ​​Political Action and Social Movements of the executive, Marian Campello. Who will be there is the mayor of Valencia, Joan Ribó, a leader very close to Oltra.

Soon to talk about alliances

Another of the absences is that of the leader of Más País, Íñigo Errejón, the formation allied with Compromís in the general elections and the party for which the old Bloc opted against United Podemos, which was the preferred option of Vice President Oltra. Regarding alliances, in Compromís they respond that it is very soon, that there is a year and a half for the autonomic ones and two for the general ones. But this does not mean that what happens tomorrow will be followed with great interest.

Although the debate is not open, the truth is that when Compromís rejected the alliance with United We Can, the context was very different. Then, the leader was a downward Pablo Iglesias and the majority in Compromís is always refractory to the Podemos brand. But now, the situation has completely changed. Díaz, today the highest valued politician, aspires to lead a platform that would no longer have the purple brand as an electoral hook and that could widen the playing field, although that creature has yet to be built. Errejón maintains its commitment to trying to consolidate its Más País brand by following its own path.

Even the absences in Compromís will contrast with the arrival of the main Valencian leaders of Unides Podem, Vice President Héctor Illueca; the trustee and leader, Pilar Lima; the coordinator of EUPV, Rosa Pérez, and even deputies like the exporter Naiara Davo. In Més they point out that Micó and Ferri have previously arranged events in l’Olleria and Xàtiva and Marzà and Climent institutional agenda.

Collection of signatures against under-financing

Compromís today presents the campaign «Exigim respect. Exigim Igualtat »in which it goes out this morning in the Plaza del Ayuntamiento de València, to collect signatures in the week prior to the demonstration in defense of fair financing on 20 November. The collection of signatures will continue this Saturday, Sunday and next week. The campaign tries to bring the problem of under-financing closer to the public by claiming specific actions in the regions, as it has already done with the Cercanías.

Also Read  A year of Filomena, the historic snowfall that the residents of Madrid weathered