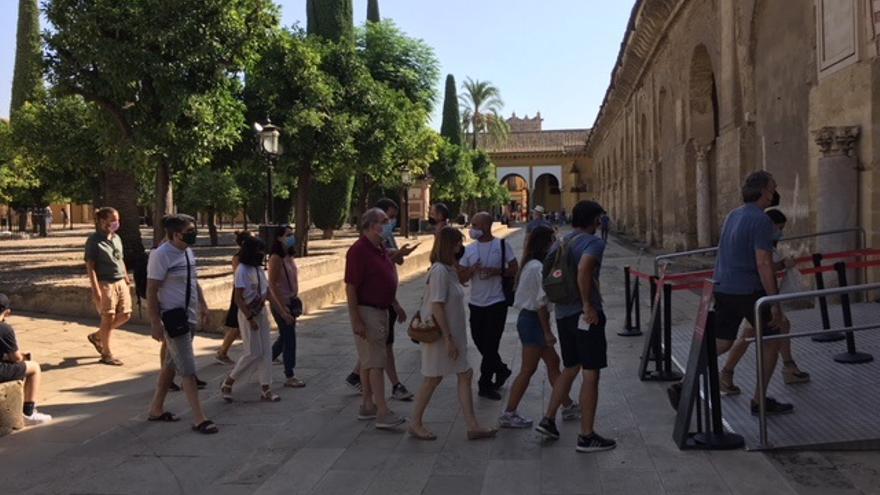 The first half of August ends with positive results for the tourism, with an average occupancy of around 80% and in some autonomies in niveles prepandemiaThanks to the domestic travelers because the international tickets have not quite reached their cruising speed.

The best occupation data, according to the sector sources consulted by Efe in the different autonomous communities, are given in the Costa Brava, where they even reach 100%. They register 90% in some parts of the Valencian Community and in inland areas of La Rioja, Navarra, Aragon and Castilla y León, while the two large cities, Madrid and Barcelona, ​​barely reach 35-40% occupancy.

The numbers are good, but insufficient to return to 2019 billing levels, because the sector lives in 70% of international tourism and only 30% is attributable to the Spanish. In 2019, Spaniards spent 48,065 million euros, of which 66% stayed in Spain and the rest went to trips abroad, while the 83.7 million international tourists who visited Spain left 92,278 million.

In Andalusia (first destination for national tourists in the summer of 2019), the hotels on the Costa del Sol reached an average occupancy of 76% in the first half of August (six points less than before the pandemic), with 68% of national tourism and 32% foreign.

The hoteliers in this area, very frequented by British tourists, have improved the forecasts they had at the beginning of the month, according to the president of the Association of Hotel Entrepreneurs of the Costa del Sol (Aehcos), José Luque.

The forecasts of the Hotel Guild of Barcelona point to a bad summer campaign, better than the “non-existent” of 2020, but far from recovery, with an occupancy of 40% in the hotel plant open at the moment.

In Girona, the hotels in the central Costa Brava have been filled during the first half of August with occupations of between 95 and 100%, figures similar to those before the pandemic, according to the manager of the Union of Hospitality Entrepreneurs and Tourism of the Costa Brava Center, Judit Lloberol.

On the Costa Dorada (Tarragona), the numbers are somewhat more discreet: between 70 and 80% occupancy, with 25% of the hotels closed. 30% of tourists are foreigners.

The Valencian Community, in 2019 levels

In the Valencian Community, August has started with the best occupancy data since the summer of 2019 (between 77 and 90%) and the Hosbec employers believe that this trend will continue in the coming weeks.

In Benidorm, the occupation of the first week was 77% and in the rest of the Costa Blanca it rose to 86%, with more than 80% of nationals, although a increased demand from the French.

Occupancy in Murcia is around 85%, a rate that businessmen in the sector trust that something will be maintained or even rise in the area of ​​the Costa Cálida in the second half of August, according to the president of the employer’s association. hotel, Soledad Díaz.

The president of the Mallorca Hotel Business Federation (FEHM), María Frontera, estimates that between 60 and 65% will be reached in the first half of August, the month par excellence on the island, still very exposed to possible changes in the travel recommendations of the main source markets (the UK and Germany). Ibiza and Formentera were around 70% in July, 21 points below that of 2019.

In the Canary Islands, in the province of Las Palmas (Gran Canaria, Lanzarote and Fuerteventura), the occupancy at the beginning of August is between 50 and 60%, mainly by the Canaries themselves, according to the president of the Federation of Hospitality Entrepreneurs and Tourism, José Mañaricúa. In the archipelago hopes are still pinned on September-October, when its peak season begins.

The Cantabrian coast, the favorite

Hotel occupancy in Galicia ranges between 65 and 85%, with little foreign tourism even on the Camino de Santiago, according to the Galician Tourism Cluster, which hopes to close a good August.

In the Basque Country, according to data provided by the associations of hoteliers of Vizcaya and Guipúzcoa, the occupancy for the whole of August is 75% and 60%, respectively, more than 20 points above last year. In rural tourism reaches 89%, even higher than in 2019. In Cantabria, the hospitality and rural tourism associations hope to improve the figures for July and those of last year, when it reached 70% occupancy in August. Until the 15th “it is practically complete” according to the president of the Rural Tourism Association, Jesús Blanco.

In Asturias, the hotel association Otea does not have precise occupancy data in the first fortnight, but it does indicate that it is above that of 2020.

The Federation of Rural Accommodation in Castilla y León stands at 90-95% occupancy in houses near reservoirs, lakes or rivers, while in those that are far away, it remains at 60-65%.

In Aragon, the Association of Hotels of Zaragoza and the province are at 50%, especially with national tourists, and records higher occupations in the Pyrenees of Huesca, Matarraña and Maestrazgo (Teruel), Cinco Villas and the surroundings of the Monastery of Piedra (Saragossa). According to the Aragonese Federation of Rural Tourism (Faratur), the figure reaches 70-75% in the province of Teruel, with a forecast of reaching and even exceeding 90% in Matarraña and Gúdar Javalambre.

The degree of occupancy in Navarra, both in hotels and in rural accommodations and campsites, is being “very high”, with figures between 80 and 90% in the first half of August, which will follow the rest of the month according to the reserves and perspectives. According to the Secretary General of the Navarra Hospitality and Tourism Association, Nacho Calvo, this “surprising” occupation compensates, even if partially, the figures for July, which has been a “bad” month.

Those that have returned to 2019 figures are the campsites and rural tourism, with the full lineup in many cases, especially of national tourists, mainly Catalans, Madrilenians and Basques. The Association of Hotels of the Federation of Companies of La Rioja and that of Rural Houses place occupancy at 90% and trust that the month will close at those values. Yes traditionally 15% of tourism was foreignThis year it will barely touch 5%.

In Extremadura the first half of August has had an occupation between 75 and 80%, according to data from the Extremadura Tourism Business Confederation (Cetex) and the Extremadura Federation of Rural Tourism (Fextur), which qualify it as “very good “, at pre-pandemic levels. It is fundamentally about national tourism.

In the Community of Madrid, which is not a preferred destination in August, hotel occupancy in the first fortnight is 34%, with only 68% of the hotels open. These are mainly national tourists, but there are also Italians and French.