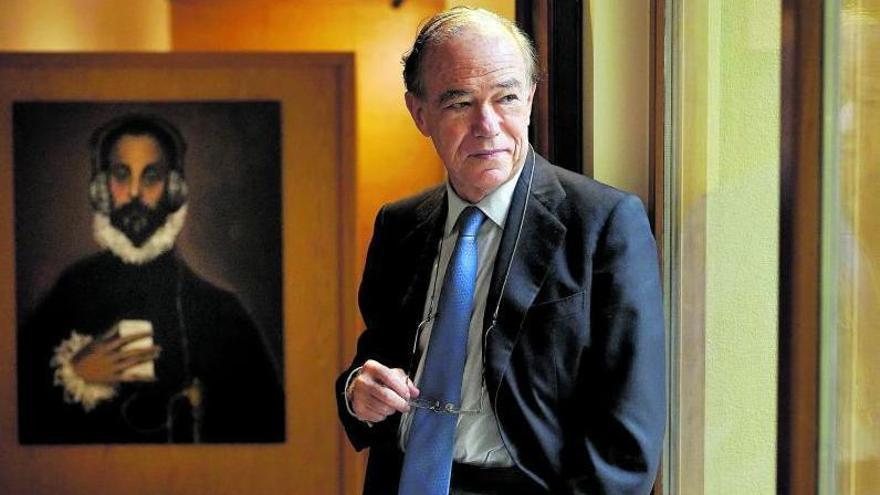 How did you decide to face the writing of the memoirs?

To a large extent, on the advice of my editor María Cifuentes, whose criteria and friendship I have always valued highly. The support of Joan Tarrida, executive director of Galaxia Gütenberg, was also decisive.

His grandfather was a very relevant figure, of whom he offers a more intimate profile. Over the years, what do you think influenced you the most, that family profile or your example as a committed intellectual?

For me the one is inseparable from the other. Certainly, he was a very endearing and close grandfather who always encouraged me, and, over time, his figure became my main reference. The latter also led to an identity problem, and for this reason, I decided not to embrace his charitable shadow so as not to go through life as a grandson.

You worked clandestinely against Franco in the last years of the dictatorship. Why did you abandon politics once democracy was achieved? Were you disappointed by the partisan drift of politics?

I militated clandestinely against the dictatorship from 1959 until the Transition, but, as I tell in my book, already in the Faculty I decided not to dedicate myself to politics, but to do politics from civil society. And it is that, in democracy, politics is the ultimate responsibility of all citizens, not only of practicing politicians, and, therefore, from civil society we can also, and must, defend our political convictions.

As a man of the Transition, does it hurt you that today there are those who try to distort or minimize the achievements of that time?

It is a minority phenomenon of denial that has various explanations. In the first place, that of ignorance, that is, ignorance of our history, forgetting that without the past there is no future. There are also some who, when they reject the Transition and the monarchy, are actually rejecting democracy. I never forget the immense poster placed on the facade of a house that presided over Puerta del Sol, in May 2011. It represented a huge urn with the following motto: “The urn is our problem.” And, certainly, there are many who call themselves Democrats and are not.

Do you think, like some analysts, that we are witnessing the worst political scenario of democracy, at the moment when we are going through the worst moment in the recent history of Spain?

I am convinced that we are experiencing the worst moment in the recent history of Spain. More than 50,000 dead, six million Spaniards in a situation of social exclusion and an economic crisis of still incalculable consequences. To this is added a political scenario in which the main parties are not able to dialogue to agree on the necessary measures to face this situation. Responsibility for the pandemic has no political color, and neither should solutions. More than 70% of the citizens demand a consensus policy like the one represented, for example, by the mayor of Madrid, José Luis Martínez-Almeida.

In those final moments of the dictatorship, you were starting your career at Banco Urquijo. Was that banking activity very different from that of today? Could banks have lost some closeness to the customer in these years?

We live in a world of accelerated change, largely due to the phenomena of globalization and digitization. Banking has also been transformed. A very notable example of the consequences of this change is represented by savings banks, which at that time represented 50% of the financial system and, today, have practically disappeared.

Another aspect in which he has stood out is in his aspect as a collaborator in the media, since his years at the University. What was the appeal of this area for you?

One of the great changes in democracy was the existence of a press independent of political control, not subject, therefore, to censorship. My interest in the media is linked to my political activism at the time, and that is what also led me to participate in the El País project. But, possibly, I have a previous roots in me. As I tell in the book, my great-grandfather, Miguel Moya, director of El Liberal and one of the most influential journalists of his time, has been a figure whose memory has been very present in my family.

How did El País manage to circumvent the successive attempts of the political powers to assume its control?

In general, the press, to be independent, must also be economically viable. Thanks to Jesús Polanco, El País was born that way. Recently, I have joined the board of directors of El Español because, in addition to the personality of its director, Pedro J., it is also an economically viable project.

He writes with some pain of his departure from the Prisa group, in 2017, in the framework of the change in the presidency that marked the end of the stage of Juan Luis Cebrián. Why couldn’t a less traumatic transition take place in the group?

That was not the result of a transition, but a real power blow in the Prisa area, which I tell in detail in my memoirs. On December 21, another similar blow was struck in Prisa, but in the opposite direction, by those who then lost the vote. Three years later, the counter is reset.

From your experience, how do you see the present and the future of the media?

The phenomenon of digitization is unstoppable and it remains to be defined how the paper edition will be. This is an essential shift between the present and the future, but the role of the media in a democratic society will remain the same.

Already in the eighties, he began to show his inclination for the defense of cultural heritage, with that initiative to save Toledo, which led to the creation of the Royal Foundation of Toledo. How did they manage to unite so many wills and agree so many interests to create this organization?

That initiative began very modestly, but it drew attention to the speculative process that was destroying Toledo. And with the efforts of all of us who promoted it at the time, the Royal Foundation of Toledo became a benchmark institution in the defense of heritage.

How do you see the defense of heritage today? Do you have the feeling that citizens have lost some of their momentum to fight for these initiatives?

The existence of state and regional legislation has been the great achievement of the various initiatives that were promoted in the 1980s in defense of heritage. Therefore, it is natural that the movements of public opinion have quieted down. This legislation can always be improved, and I am aware of the great sensitivity that José Manuel Rodríguez-Uribes, our excellent Minister of Culture, has in this regard.

According to him, the Royal Foundation of Toledo was on the verge of dissolution at the beginning of 2020. After that crisis, how do you see the future of the entity?

Xandra Falcó is the new president and under her leadership we are studying what is the social role that, in this new context of protected heritage, an institution such as the Royal Foundation should have. For example, in the field of cloistered convents that are closing in Toledo and that have an artistic heritage of extraordinary importance. In order to define the future of the Foundation, dialogue is also being held with the Minister of Culture, the President of the Board and the Mayor of Toledo, so that the Royal Foundation continues to be a meeting place between Public Administrations and civil society.

In 1995 he joined the Board of Trustees of the Fundación del Teatro Lírico and actively participated in the reopening of the Teatro Real, in 1997. But he quickly resigned due to the interest of the first Government of José María Aznar to politicize the programming and due to the imminent dismissal of Elena Salgado , who was the general director, by order of the then Secretary of State for Culture, Miguel Ángel Cortés. Why do you think Cortés acted like this?

At the request of Esperanza Aguirre, Minister of Culture, I tried to convince Miguel Ángel that politics should respect the excellent project we had at the Teatro Real. But I did not make it. Esperanza herself published later that she wanted to defend Elena and also Stephan Lissner, who was the artistic director. Miguel Ángel, who is a very valuable and intelligent person, did not know anything about opera and, mistakenly, attributed the programming we had prepared to a “leftist politicization.” After Elena’s resignation, Emilio Lledó, Alberto Zedda, Luis de Pablo, Isabel Penagos and I resigned, and, weeks later, Stéphane Lissner also resigned. The artistic ambition of the project collapsed.

At that time, the separation of the Teatro de la Zarzuela and the Teatro Real was also decided, something that you regret. There has been talk in recent years of a unification, do you think it would be the best?

I have no doubt that it would have been the best, and, above all, for the lyrical genre of zarzuela. A single project, with two stages, by definition is more reasonable than two theaters, both dependent on the Ministry of Culture, programming operas and zarzuelas separately on both stages and unnecessarily doubling their costs. The argument used against the project was that the Teatro de la Zarzuela was being privatized, when the Fundación del Teatro Real is, legally and functionally, a public institution attached to the Ministry of Culture. This blatant lie revealed that the opponents were only defending corporate interests.

In 2004 he joined the board of the Teatro Real, and in 2007 he was elected as the first independent president. To what extent was this statutory change key to guaranteeing the independence of the Royal Theater? Is the institution shielded from possible political interference such as in 1997?

The Fundación del Teatro Real is not a private institution, but a public one, and, in this sense, it is subject, vocationally and statutorily, to the cultural policy of the Ministry of Culture, and also of the Community and the Madrid City Council. What was achieved in 2008 was autonomy and stability in management. Between 1996 and 2007, the Teatro Real had six presidents – three ministers of Culture from the PSOE and three from the PP – and each of them imposed a different management team. As a consequence of this instability, the Royal Theater did not emerge from irrelevance.

Between 2008 and the present, we have had only two artistic directors, both exceptional – Gerard Mortier and Joan Matabosch – and, since 2012, an extraordinary CEO, Ignacio García-Belenguer.

What do you think has been the greatest achievement of your time as head of the Royal Theater Board of Trustees?

Open the theater in the “times of cholera” as a flag of resistance and hope. Recently, the Society Press has published an article on the situation of opera in the world, in which it highlights that the Teatro Real de Madrid has been the only relevant opera theater in the world that has opened its doors, while maintaining , the necessary sanitary security measures.

When can we return to the theaters normally?

I believe that as of September 2021 we will have overcome the pandemic and we will recover the lost normality, in almost all areas, also in the theater.

Will the Royal Theater and other cultural institutions suffer the ravages caused by covid-19 for years or do you trust a relatively quick recovery in the sector?

The Royal Theater had no debt and had a very tight cost structure. In this exercise, we will register losses of about 9 million that next year will be much lower. I am convinced that in the next two years we will have amortized them. Fortunately, low interest rates will facilitate this recovery.