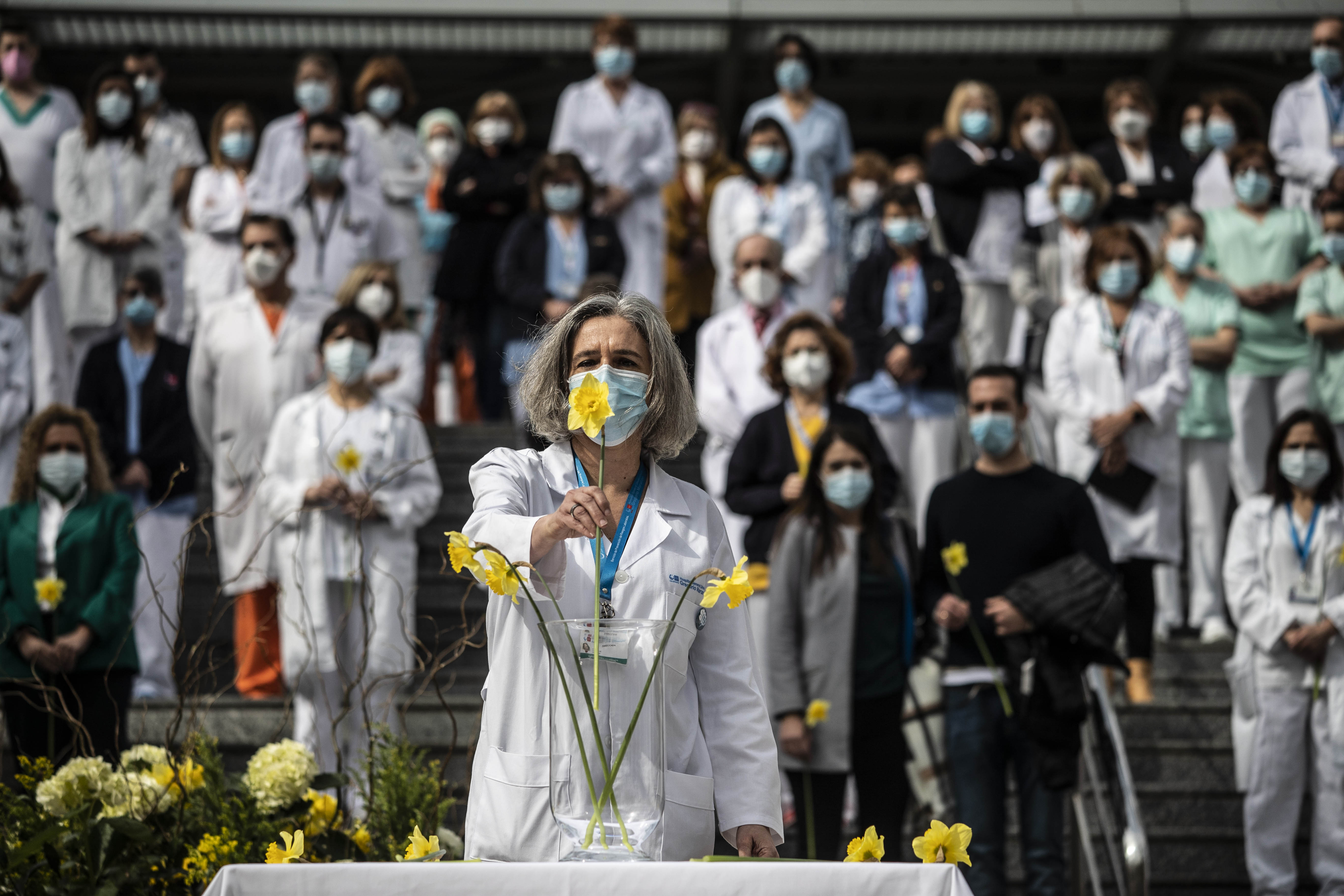 They left shortly before noon at the door of the Gregorio Marañón Hospital. Each specialty, with the white coat or pajamas of its color, with the mask well placed and a yellow daffodil in hand. They have been distributed leaving space for the entrance stairs to the center. There, in the same place where during the first wave of the pandemic they went out every afternoon at eight o’clock to applaud. But this Friday, the hospital workers’ tribute was not directed at the patients they fought for, or the citizens who were confined, but rather those who could not save. “This tribute is so that they know that they were not alone and that they are not alone,” has been heard through a loudspeaker. At the bottom of the stairs, more bouquets of daffodils from the Real Jardín Botánico de Madrid, donated by the Spanish Association of Florists (AEFI). And, above all the voices, the violins of Víctor Arriola and Paulo Vieira, from the Community of Madrid Orchestra, who have performed the Sonata for two violins, by Jean-Marie Leclair. Then came the verses: “We learned to interpret your silences and although distance prevented hugs, it never prevented feelings.”

Some of the lines in this poem, written by the hospital workers themselves, speak of the affection and affection of the health workers, who honor the memory of those who left. The Gregorio Marañón has been one of the hospitals that has treated the most coronavirus patients: 16,116 patients to date. During the event, a minute of silence was also observed.

“This has moved me a lot,” says supervisor Pilar García Santos, who has spent 27 years with critically ill patients, but says she does not remember a situation similar to the one she has experienced this year, not even during the attacks of March 11. “Although we had psychological support at the beginning, you do not finish healing, a small tribute is enough for images to come to your head,” he says with a broken voice. And remember how hard it has been to isolate patients and live with fear. During the first wave, she was in charge of setting up a mobile ICU in the library for 19 patients. “It is the haste that required you to open more beds and remove material from where there was none. We were here for 14 or 15 hours working and I was afraid of infecting it at home, ”he explains. “The positive part was that the workers went out of their way and all sectors of the community lent a hand. Thanks to that, we treated many patients who left ”.

Dr. María Eugenia García explains that this tribute represents not forgetting reality and what has happened, so that people follow carefully and do not lower their guard. And remember that the hospital continues with full intensive care and permanent admissions. Despite the fact that the incidence has decreased in the community, she warns that with any carelessness it can increase again. “When we don’t have the covid patients, there is a brutal burden from the others. Other pathologies have had to wait and there are people who have not come out of fear. The load is still important and we are very tired, but we continue because it is our job ”, he points out. “We depend on the population having an intelligent and healthy attitude.”

With less experience, Samuel Díaz is a first-year resident physician in internal medicine and began practicing in September. He highlights the isolation of patients. “The telephone is very impersonal and people understand each other much better in person. That has been an important handicap ”, he explains. “In addition, before the relatives could come and they were a very important support and that is why it has been very hard for them, both for the patients and for us.” With a smile, he says that he has not been afraid, that he threw himself to work without thinking, but he acknowledges the exhaustion. “You see that it never ends, that you stretch the gum, shrink it and stretch it again. Working hours get longer, you don’t go out at your scheduled time and you always have to stay because there are still people to see or patients who get sick at the last minute, ”says the 25-year-old doctor.

Relatives of the victims were also present at the event, such as Sierra Algaba, in charge of cleaning the operating rooms. His brother José, who was 63 years old and spent 34 days admitted to the ICU, died in April 2020. They both worked at the Gregorio Marañón, he on the transfer team. They were very close and always met at coffee time. “My brother was a very good person and a very good worker, they paid him a lot of tributes because they appreciated him very much. He was the Santa Claus from the hospital, that’s what they called him, because of his beard and white hair, ”he recalls. She knows that at least he was calm because she could go see him. He knew firsthand that he was not alone. And, like her, the Gregorio Marañón workers accompanied the patients who failed to overcome covid-19 until the end.