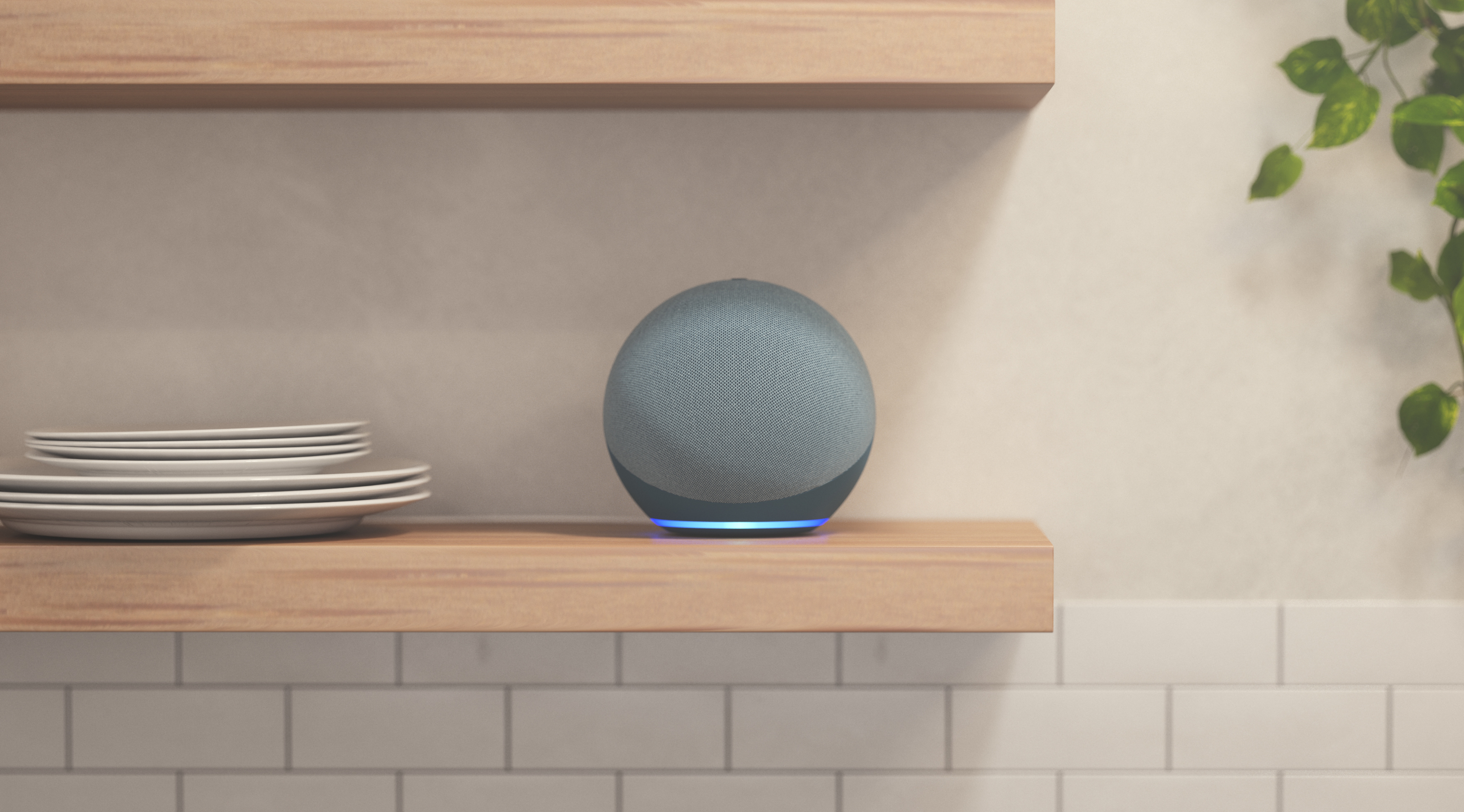 Amazon has released many variants of its smart speakers, plus multiple generations of each. We can have an Echo Dot, Echo Show 5, Echo Show 8, Echo Show 10, Echo Flex and Echo Auto, among others.

All of them have been launched to make our lives easier, thanks to the assistant that Amazon has created called Alexa. Other brands like Google or Apple also have a similar help system, but it is true that most users agree that the one that works best and offers the most possibilities is that of the brand founded by Jeff Bezos.

All of them are prepared to offer the maximum interaction with the user within the possibilities that each model has. Obviously those that have a screen will offer more information than those that do not.

There are even some of the versions that are oriented directly towards our car.

By incorporating the accessories that we are going to show you, the functionality and versatility of all these smart speakers is greater, so at any given time it can be extremely interesting for us.

What can the Echos do for us?

Amazon smart speakers can perform a good number of features that will serve us in our day to day.

The main functions that these devices can perform with Alexa are the following:

These are some of the main features that Echo smart speakers have. along with the virtual assistant Alexa.

Once you have read this, you will realize why they have been and are so successful.

Once we understand better what we are talking about and what are the possibilities that they offer us, we are going to see a series of accessories that the only thing that they are going to achieve is that these smart speakers are still more versatile than they are.

If all the functionalities that we have just seen are incorporated to improve them for the convenience of the user, we will be faced with possibilities that become extremely interesting.

The fourth generation of the Echo Dot caused it to undergo a facelift not only in its form, since we are now talking about a sphere, but also its hearing power has been greatly improved.

The accessories that we are going to present to you make them take up less space, since we can place them on the wall very well attached or leave them on the table giving them a fun touch and it will be impossible for them to go unnoticed.

The smallest and above all cheapest smart speaker on Amazon. It integrates Alexa with all the functions of its older brothers but in a much more compact and versatile size.

This is a wall mount with which we will achieve have the device next to the socket that we want, which will mean that it will stop taking up space at the table, but without taking away any of its prominence.

The design allows the Echo to become an elegant part of the decoration of the room where we have decided to put it. Its price is 9.99 euros.

If you are a Star Wars lover you will not be able to resist this support for your Echo Dot 4 with Baby Yoda figure.

Not only will it serve to hold the device, but it will also give it a fun, distinctive and original touch, although for many it may be a bit geek. Its price is 24.99 euros.

In this case we are talking about a support that goes on the wall, made of transparent acrylic, which is valid for the third and fourth generation of the Echo Dot.

It is really very beautiful and can be placed in a bedroom, bathroom, kitchen and even the living room. Its value on Amazon is 11.99 euros.

Another of the most successful devices is the Echo, let’s say “plain”. It is in its fourth generation in which facets as interesting as the digital home controllercapable of handling home automation, in addition to a 3-inch buffer, two tweeters and Dolby processing.

Its accessories also make it more versatile for the user when it comes to working with it. Let’s see examples.

We review the features of Amazon Echo smart speakers and show which model is best suited to your needs.

Also Read  10,000 years ago the human being discovered agriculture. We may not be the only species to do so

This is a support to place the device on the table, but not only that, since at the same time that the Echo is on this base will be loading.

We can take this speaker with us wherever we want since its battery offers us up to 5 hours of uninterrupted duration. The support places its price at 39.99 euros.

Made for Amazon Support

Thanks to this support we can put it on any wall that interests us with the ability to rotate and tilt it to listen to it perfectly.

It offers great flexibility since it is can rotate 150 degrees and tilt it 30 degrees. If we want to take it home we will have to pay 24.99 euros.

The Echo Show is the best alternative if we want a smart speaker that includes a touch screen with which we can interact.

There are several models whose difference is based on the size of the screen, since there is the 5 inchesanother who has 8 inchesa larger one with 10 inchesuntil reaching the largest of all whose screen has a diagonal of 15 inches.

An Amazon Echo, but with a 10.1” screen. It’s like having a tablet, but in a fixed position at home. We can watch recipes and make video calls, but also Prime Video series without any problem.

The two best-selling models are the 5 and 8-inch ones, which are the ones we are going to look at to see some of their accessories.

The Echo Show 5has a screen that really reaches up to 5.5 inches in its second generation. This is a model that is usually used as an alarm clock on our bedside table, but with many more possibilities.

Thanks to this base we can tilt the device forward or backward effortlessly to improve the viewing angle.

It has magnetic fixation that is done quickly and safely, since the device is perfectly integrated. Its price is 19.99 euros.

With this adjustable stand you can make a 360 degree rotation and adjust up or down to 24 degrees.

It is made of high-quality aluminum alloy with an elegant finish and an anti-slip mat at the bottom to protect the table from scratches and prevent slipping. The value that we must pay to have it on our table is 18.99 euros.

The version of 8-inch Echo Show It has very interesting things like a hd screen and a camera with automatic framing, with 13 megapixels to make great video calls.

Some of your accessories are going to give you even more value than you already have.

Also Read  The sedan seemed doomed to disappear in favor of the SUV. The electric car is going to change that

This Amazon smart speaker stand is made with a flexible ball for rotate 360 ​​degreesand get a tilt of 45º forwards, backwards, to the right or to the leftwhich substantially improves the viewing angle.

If what you don’t want is for the Echo Show 8 to take up space on your table, you will always be able to use a support like the one we present to you.

It is placed on the wall by means of 2 screws so that the device occupies less space. In addition, its chrome favors the bracket elegance. The price is 35.99 euros.

It’s Amazon’s smart speaker with the smaller screenbut it is also the only one that has a sphere shape of those that incorporate a panel.

That small size we are talking about is one of its great assets, since it can be placed anywhere without disturbing it. In terms of functionalities, it has the same that we can find in any other device with Alexa.

It’s an Amazon Echo Dot… but with a screen. It is a smart speaker that has Alexa, but also with a screen to play Amazon content and a camera for video calls.

This is a stand that still gives you a more elegant look to the Echo Spot. can be adjusted to multiple angles as it moves 360 degrees which will greatly favor the viewing angle of the screen.

In order for it to arrive at home, we will simply have to pay 13.99 euros on Amazon.

If what you want is to take the possibilities of Alexa beyond your home, that is, to reach your own carthen you have to get an Amazon Echo Auto.

It is a device that allows us to talk to Alexa from our car. incorporates 7 microphones so that the assistant can hear us even when we have the music on.

If you want a way to fix your Echo Auto to the car, you can achieve it with this accessory that allows if magnetically join. To the dashboard of the car it is simply glued by means of 3M adhesive.

With all these accessories that you have just seen for Amazon Echo devices, you will surely achieve greater versatility and productivity in the one or those you have.

You can tell us, on our social networks, which of all has been better for you, since we want to know your decision.