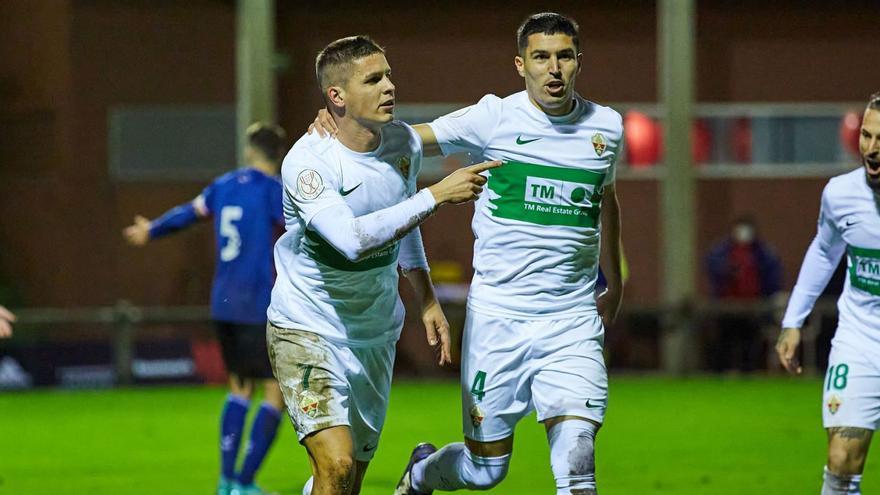 Elche yesterday achieved a victory that serves as a balsam after two months without winning -the last victory was against Celta in the League-, even in the Copa del Rey competition, in which they go to the second round thanks to the double of Guido Carrillo. The Argentine was the best of the franjiverdes, who found in Leioa a tough rival who had a hard time defeating.

The procedure was completed before a Third RFEF team (such as the Ilicitano), but the difficulties were many: first-line technician, totally new and unusual starting eleven, bad weather, muddy pitch, nerves … In fact, the party started with local dominance.

Leioa was much better positioned on the pitch than Elche throughout the first half. The team from Elche, except for the goal, did almost nothing else. In fact, he was completely missing in 41 minutes. In 42 Guido Carrillo scored the center of Barragán. He only brushed the ball, in a pass that did not seem to carry so much danger but that was poisoned and the goalkeeper did not smell.

Francisco’s team had many difficulties in the first 45 minutes. It was almost as cold as the weather – rain, freezing wind and 10 degrees. Inaccuracies in the passes -even in the kicks from the goal and the band-, disorder in the drawing and players who could not find their position, without center of the field, unable to get a ball played and to give three consecutive passes in rival territory. .

In the first half, apart from the goal, only three shots on goal. The first had some danger. It was from Josan in minute 2. The other two from Benedetto, from outside the area. Far away and lazy, the first more than the second. Very little danger and minimal forcefulness. The much tougher premises. So much so that Pere Milla bled from a blow to the face that could have been a card and the referee did not see. He also did not notice other blows to Barragán and Carrillo.

Leioa had much less the ball, but was the protagonist of the most dangerous opportunities. In the first minutes, three interned in the area, two of them very close to the goal. Luisma was the most active of those up front. In the 13th he had a clear chance that Casilla covered very well, leaving him without a gap to shoot and stopping his shot. The goalkeeper, very confident except with his feet, was also key to the victory.

The mud began to become more present as the game progressed. The shirts of the Elche players reflected it every time they fell. And it was a lot in the face of constant fouls that the referee did not punish. In short, a very discreet, boring and tense start, where too many inaccuracies almost put the Elche team on the ropes.

The second half was different. Not too much in terms of entertainment, but it is true that Elche dominated their rival much better and made fewer mistakes. This part began on the occasion of Carrillo, but soon had a local response, who enjoyed greater depth in his game. In 51 Casilla took out a corner with his fist that went inside. Instantly, Leioa had another corner kick. Although the tie was not close, there was fear among the French-green. Guido Carrillo was in charge of giving peace of mind. Gumbau took a far and very precise free kick at the head of the Argentine. His shot went straight to goal. It was his second, his vindication in the field, his letter of introduction to the new coach. Yesterday, everyone tried, but certainly Carrillo was the one who linked will and success.

With the calm of going two ahead, Elche combined better, but had inaccuracies and offered concessions. In 58, the franjiverde goalkeeper had to work hard with two consecutive saves from Leioa, one of them from point-blank range. Great reflections and broken the hopes of the Basque squad. Shortly afterwards, Casilla, who was very firm on top, had a blunder when kicking the ball with his foot, handing it over to an opponent who, innocently, was shooting loose and centered.

The changes were coming and Francisco gave John and Jony Álamo the opportunity to debut this season. Above, Pere Milla was very active and Benedetto, who had the opportunity to show that he wants to continue in the title, did not give a single one. Deconcentrated, the Argentine attacker wasted several cons, one of them, in 89, quite advantageous in which he could have scored. It was not his day. In 91, Milla finished off with a great shot, which was rejected by the rival goal. In 92, Casilla’s miraculous hand and a goal annulled to Leioa. In the end, a process victory and a lot of work.

Pere Milla was emptied in the 90 minutes, being one of the most combative players in Elche. | LOF