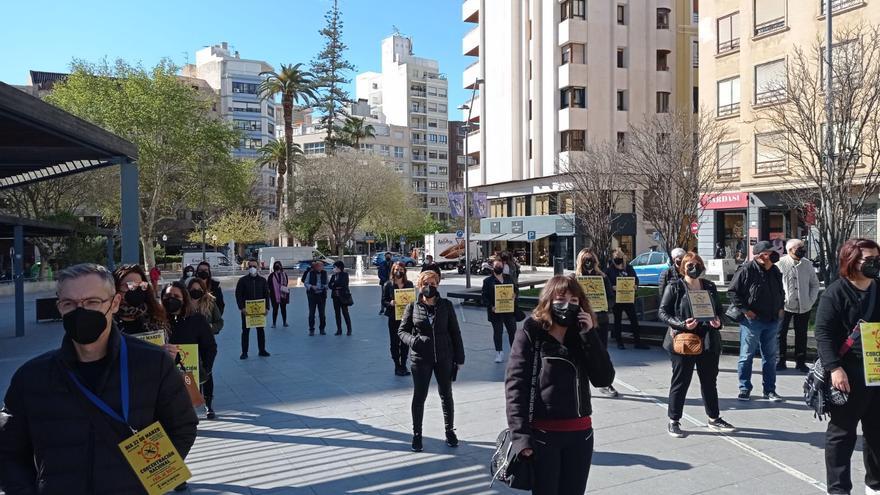 The hairdressers and beauticians from Alicante have concentrated today in Alicante to claim the VAT reduction. Professionals from the province thus join the hundreds of concentrations and protests by hairdressers and beauty salons called for today throughout the Spanish state. The objective is to demand from the Government, and particularly the Socialist Party, reduced VAT recovery fulfilling the commitments made by the PSOE when it was in opposition considering that it presented and defended in April 2018 a Proposal No of Law (PNL) demanding the reduction of VAT at the reduced rate of 10% to the sector and that now, it is reluctant to apply.

Promoted by the Alliance for the reduction of VAT to 10% to hairdressing and aesthetics and organized by the personal image platform BELIEVE IN NOSOTROS, and with the participation of PPUE, ANEIP, ANEPE-IMPE, FANAE, CONEPE, and the federations of personal image of Catalonia and the Basque Country, FEDCAT and EIPEF, today a hundred concentrations and acts of protest in person and online are taking place in Spain in many other Spanish cities, having special significance the concentration in front of the headquarters of the socialist party in Ferraz Street in Madrid, to give a forceful wake-up call to the PSOE as a party that supports the Government of Spain.

This mobilization of hairdressers and beauty salons is an unprecedented fact in the protests of SMEs in any sector of the economy, with the celebration of the greater number of simultaneous concentrations that have never taken place, and that it intends to serve to raise the voice and the dimensions of the protest of the personal image to demand that the Government of Spain address the reduction of VAT on personal image as an essential service since it has been suffering a comparative injury compared to other sectors since the VAT increase to 21% took place, and until now, and despite being an essential service, it has been able to recover its reduced tax rate as it has This happened with the rest of the sectors to which the Government of the Popular Party raised the VAT in 2012.

A measure that is absolutely essential in the current dramatic economic context of the personal image sector, with a loss of business volume in 2020 of 38.8% as a result of the coronavirus crisis, and that according to the studies of perspectives in the sector, it may sharpen its decline by 31.8% in 2021, which could mean a loss in absolute terms of 58.3% of the turnover of the personal image, which takes you back from the € 4,000 million invoiced in 2019, to only 1,670 million in 2021, and the destruction of tens of thousands of jobs, mainly female, young and self-employed, which can pass, to a large extent, to the economy submerged.

Considering, furthermore, that this situation is aggravated by the exclusion of personal image from the Extraordinary Measures to Support Business Solvency Plan approved by the Government of Spain in the Council of Ministers on March 12, since with losses of more than 38%, and a decline in turnover of more than 1,500 million euros, its CNAE, remains outside the approved aid, and for this reason, the Business Alliance for hairdressing and aesthetics, demands the revision of the approved Decree and update the list of the CNAE of the economic sectors that can benefit from these direct economic aid, and include the personal image sector.

The acts of protest of the personal image began on August 10 in Valencia with a first demonstration and later, three new days of protest have been held, on October 20 in 24 cities, on January 20 in 77 cities, and today, in 100 cities throughout Spain. By communities, the 19 confirmed in Andalusia and Catalonia, the 10 in Castilla y León, or the 8 in Galicia stand out by number of concentrations, and so on up to 100 confirmed.

At the political level, it is very important to highlight the activation of a intense political debate both at the level of the autonomous parliaments and in dozens of consistories in which the parties are positioning themselves, transversally and apart from partisan positions in favor of lowering VAT on the personal image sector. Even the PSOE itself with its support for the NLP of Aragon and Castilla La Mancha.

This debate has led to the presentation of different NLPs and requests to the Government to promote the reduction of VAT in the hairdressing and aesthetics sector in the regional parliaments of Asturias, Galicia, Castilla La Mancha, Aragón, La Rioja and Andalusia by of Unidos Podemos, Ciudadanos, BNG, Foro Asturias, Partido Riojano and VOX, as well as the recent presentation of new NLP in the Congress of Deputies by the Popular Party, Esquerra Republicana de Catalunya (ERC) and VOX, after the NLP and amendments presented during the processing of the General State Budgets for 2021 of Compromís, BNG and VOX or the subsequent one by PDCAT, thanks to the efforts made by ANEPE-IMPE, ANEIP, the Plataforma de Peluqueros Unidos de España, Believe in Us, or the Alliance itself.