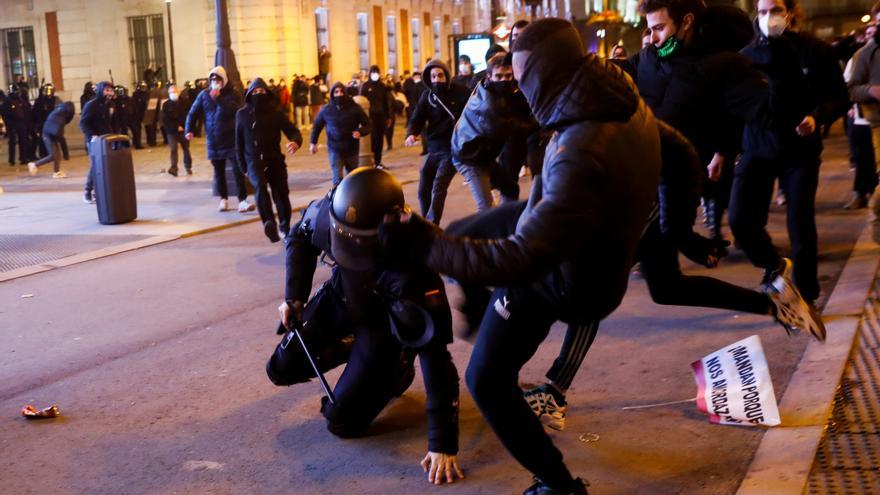 No one should go to jail for the lyrics of some songs or for the content of some messages on a social network. However crude they are. As painful as they are. Pablo Hasél has not gone to jail for the content of his lyrics, but for his criminal record that previously accumulated: the attack on a TV3 journalist, whom he insulted and sprayed with cleaning fluid, and for threatening a witness in a trial against some urban guards. Hasél has also been condemned for exaltation of terrorism (the tweets and their songs). That is, for the former they condemn him and for the latter they imprison him for the sum of the antecedents. It can be said that, in reality, Hasél was condemned for being a fool at three o’clock, for ‘retarded’. And this is already my harvest: for making some shitty songs that don’t honor rap, in which lyricists smarter than him say the same thing, but working the lyrics a little more. Rap, like rock, like pop, like any other musical genre, you have to work on it, Pablo. Your rap is an insult to the rappers guild.

Having said that, No one should ever be convicted for making use of article 20 of the Spanish Constitution. It should be remembered in its essence:

“Rights are recognized and protected:

a) To freely express and disseminate thoughts, ideas and opinions through words, writing or any other means of reproduction.

b) To the literary, artistic, scientific and technical production and creation.

d) To freely communicate or receive truthful information by any means of dissemination. The law will regulate the right to the clause of conscience and professional secrecy in the exercise of these freedoms.

2. The exercise of these rights cannot be restricted by any type of prior censorship.

3. The law shall regulate the organization and parliamentary control of the means of social communication dependent on the State or of any public entity and shall guarantee access to said means for significant social and political groups, respecting the pluralism of society and of the various languages ​​of Spain.

4. These freedoms are limited by respecting the rights recognized in this Title, in the precepts of the laws that develop it and, especially, in the right to honor, privacy, self-image and protection of the youth and childhood.

5. The kidnapping of publications, recordings and other information media can only be agreed upon by virtue of a judicial resolution ”.

If there is something to praise Hasél, it is that, unlike other artists, he has not fallen into the trap of self-censorship. Songs from another era, much more elaborated, would not last today beyond three messages on Twitter: ‘My girlfriend’s tits‘, ‘Today I’m going to murder you‘ Y ‘Ayatolah‘ (Total sinister), ‘Special train‘(Caligari Office),’I will kill her‘(Loquillo),’Cockroaches‘(Log),’ETA, leave a disco‘, ‘Veterans of the kale borroka‘, ‘Gora Spain‘(Lendakaris Muertos),’Hernani July 15, 1984‘ (Cut), ‘The Congress of Mice‘(La Polla Records), and so on to infinity and beyond, compositions from an era with more freedom of expression than today. And in other countries there were still more: ‘God save the Queen (and her fascist regime)‘ (Sex Pistols) o ‘Kill the poor‘(Dead Kennedys, whose singer, Jello Biafra, was a candidate for Mayor of San Francisco).

The new normal. Protesters for freedom of expression attacking the press. Riot police jumping into the field to give it their all. The party has ended up joining cells of sleeping indepes in Barcelona, ​​teenage beards in Madrid, various rioters in different cities of Spain, the riot police and Echenique. What a combo. What everyone likes black heat (‘black heat’, in police jargon, take the baton for a walk) Between the confinement and the restrictions it seems that they missed him.

The weight of the arguments fades as the voice is raised. That is what has happened with the protesters in recent days and with some little justified police charges. And in between, professional network agitators with command in place. Echenique, like Toni Cantó, is the new Girauta. Or worse: the new Trump. The only thing missing from Podemos was after the demonstrations to stand behind a microphone and release before the cameras: “Go home, we love you.” Echenique justifying the vandalism of some retards as Trump justified the vandalism of other retards who did the same, although on a larger scale: attacking the institutions, the Capitol does the same to me as the National Police or the editorial office of El Periódico in Barcelona.

Some and others trying to appropriate article 20. For a reggaeton they wouldn’t have made such a mess. And when it comes to our institutions, for the priest and the Nazi girl who targeted the Jews it seems that neither.

Also Read  Georgieva, on the scandal at the World Bank: “The problem is on the other side of the street” | Economy