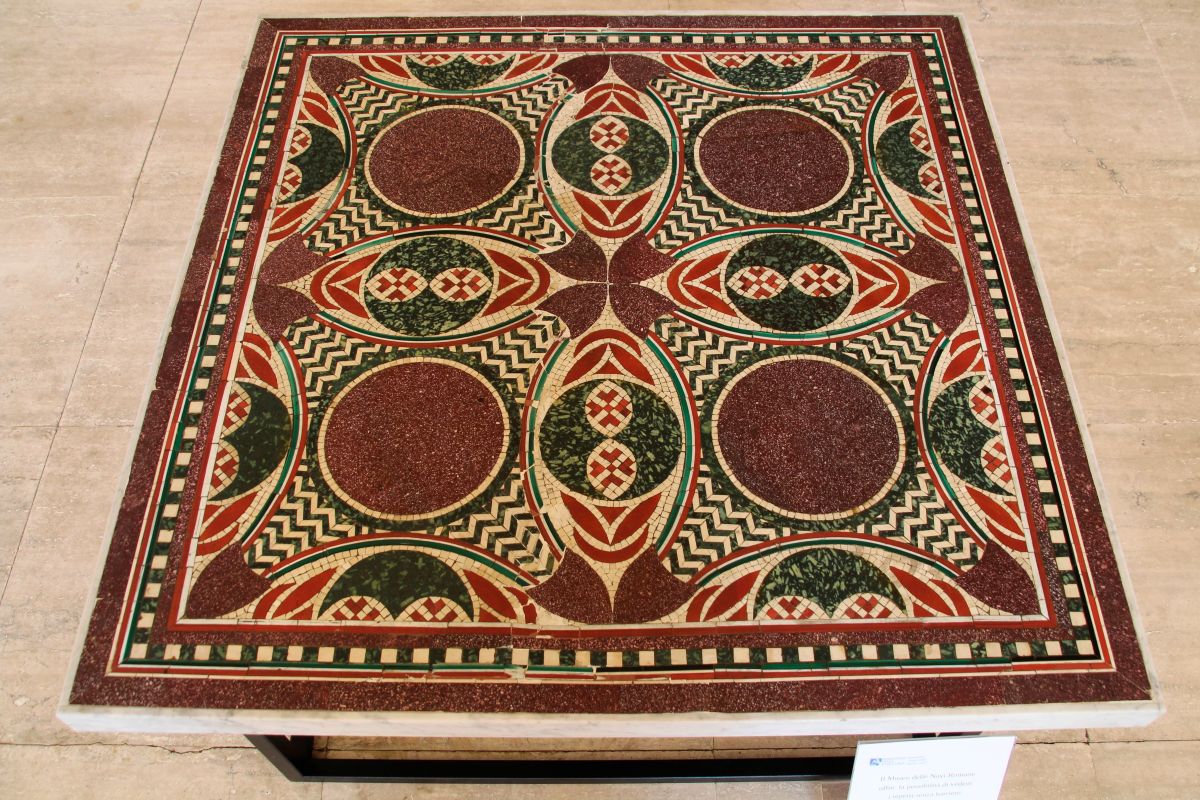 Back in the 80s, he was offered $ 1 million for the piece and he turned it down.

An extraordinary story links a nonagenarian woman from New York, a Roman relic and the feared Roman Emperor Caligula, which has had a “happy ending.”

It turns out that a couple of years ago, An antiquarian named Helen Fioratti, began to review in detail a book written in 2013 by the Roman architect Dario Del Bufalo, and among its pages she recognized an object that was very familiar to her.

It turns out that The precious mosaic that she used as a table for tea was very similar to the archaeological remains shown on that page: one of the mosaics that decorated one of Emperor Caligula’s ships in the sacred lake of Nemi, near Rome, and which had been lost long ago.

Fioratti had bought this piece in the 70s, made of serpentine stone and reddish porphyry, to the noble Orsini family, then owner of the Lake Nemi area. Hidden in a suitcase of a friend who was a diplomat, the woman managed to take the mosaic to New York and, on this, she had tea and chatted with her husband for years.

In fact, in the 1980s, people from the Metropolitan Museum in New York offered Fioratti about $ 1 million for such a beautiful piece, an amount that she rejected because for her and her husband, the mosaic represented a lot in their lives.

The great discovery about the mosaic used as a tea table

It wasn’t until one day in 2013, at the presentation in New York of a book by Del Bufalo on porphyry, that the antiquarian recognized her precious table. 2 light marks in two circles of porphyry allowed Fioratti and Del Bufalo to confirm that this was the piece they were looking for.

Italy then solved the mystery of the “lost mosaic of Caligula” and was recovering a priceless piece of his own historical heritage.

How did it get lost?

In the 1960s, Italy lost one of the mosaics that adorned the great ships of the Emperor Caligula.

Caligula’s lost mosaic dates from the 1st century AD, when the controversial emperor lived, born in AD 12 and assassinated in 41 by his own Praetorian guards on Palatine Hill, after less than four years in power that remained. For the history.

The piece was part of the decoration of the 2 large ships that he had built on Lake Nemi, a volcanic crater near Rome and that in the time of the Empire housed a sanctuary of the goddess Diana, as explained in the presentation by Massimo Osanna.

The ships, actually authentic “floating palaces”, were the definitive symbol of the controversial third emperor of Rome, the son of the mythical Germanicus, and they demonstrate in our days “the greatness of Roman naval engineering”, added the expert.

However, the ships ended up sinking to the bottom of the lake and it took 20 centuries, until the 1930s, for them to be recovered from the quagmire. Exposed then in a museum, they succumbed to the flames of World War II.

Among the remains that were saved was this mosaic of green, white and red tesserae, very well preserved, and which, as happens many times in history, ended up losing track.

The vestige was presented this Thursday at the Naves Museum of Nemi in the presence of the general director of Museums of Italy, Massimo Ossana, and Roberto Riccardi, commander of the Carabinieri Corps for the protection of heritage, among others.

“It is essential that objects return to their context”, says Osanna, who ran the Pompeii site in the past.

With its inauguration this Thursday, and after having been previously exhibited in the Italian presidential residence, the Quirinal Palace, the mosaic can be visited for the first time in a museum, of course with the pertinent measures against the coronavirus.

The return of this piece to Italy puts an end to an entire odyssey that began when its track was lost in the 1960s. A “happy ending” for Del Bufalo, the involuntary architect of this long-awaited and happy discovery.