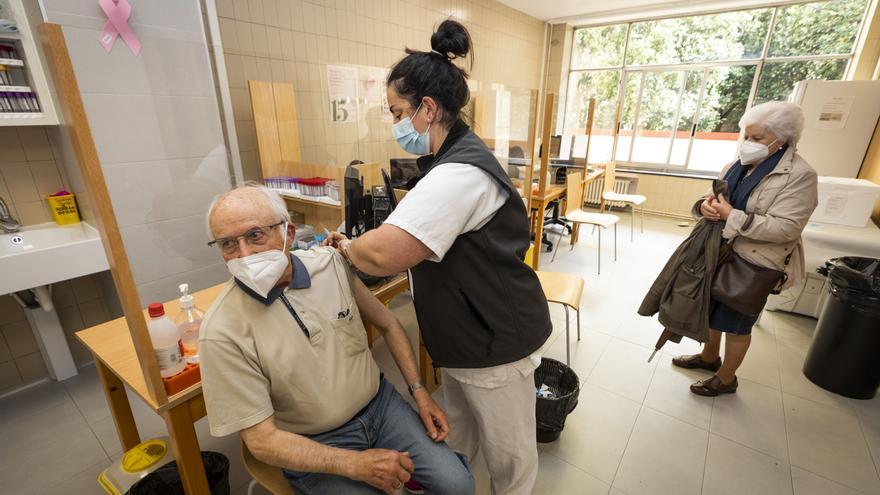 Cumulative incidence continues to increase in some communities that since this Thursday have begun to be placed in the register of “high risk”, while the latest statistics published by Health on the vaccination campaign pointed to a record figure in 24 hours with the inoculation of 306,995 doses.

This data reflects that the number of people who have received at least one serum amounted to just over 5.5 million (13.8% of the population) and the immunized to almost 2.8 million (7%).

Spain has this week 2.4 million vaccines from Pfizer, Moderna and AstraZeneca, awaiting the new shipment of more than a million new vaccines that will arrive on Monday.

Health, in this context of accelerating vaccination against the increase in cases, has chosen to expedite the shipment of sera to some territories such as the Canary Islands in order to guarantee the supply of all doses, as well as to Ceuta and Melilla, both cities in extreme risk after exceed 250 cases per 100,000 inhabitants.

Data just as worrying as those offered last Thursday also by the ministry itself, in which it was revealed that the cumulative incidence has been increasing during Easter so far in Spain up to 154.7 cases per 100,000 inhabitants.

– Basque Country: the contagion rate has skyrocketed in recent hours to 9.1%, with 567 new positives and the capital of Alava on the verge of its perimeter closure, less than a tenth of reaching 400 cases per 100,000 inhabitants in 14 days. The percentage of positives from tests carried out has gone from 7.3% on Wednesday to 9.1%, this is the highest figure since November 9, when this parameter stood at 9.3%.

– Catalonia: Epidemiological indicators continue to worsen, with 1,712 new cases and 17 deaths confirmed in the last 24 hours, while the number of patients admitted to intensive care units has increased. The cumulative incidence of cases per 100,000 inhabitants after 14 days (IA14) also worsens and has reached 234, five cases more than the previous day.

– Andalusia: The number of people admitted to Andalusian hospitals for covid-19 has increased by five in the last 24 hours and stands at 1,032, of which 267 are in ICUs, 17 more than this Thursday.

– Extremadura: has registered in the last 24 hours an increase in new infections (139 compared to 106 this Thursday) as well as an increase in hospitalized patients (five more in the ward and one more in the ICU) and the accumulated incidence (108.18 cases per 100,000 inhabitants at 14 days, 6.28 points more than this past Thursday, and 64.16 cases at seven, 7.12 more), in addition to one death.

– Galicia: contagions have grown again this Friday to 154, 16 more than the previous count, in a day in which the pressure of care in the ICU and in the ward also increases, and active cases decrease slightly.

– Madrid: The new infections have dropped this Friday to 855 on the second day of the Easter weekend, as it has been happening on holidays as fewer tests are done, well below the 2,563 cases reported on Thursday, while deaths rise to 25, one more that yesterday. Hospital pressure has risen with 102 more patients admitted to the ward and three more to the ICU.

– Aragon: It has registered 164 new infections detected on Thursday, 34 less than a day before, and no deaths. The cumulative incidence in this community in seven days is 82.8 infections per 100,000 inhabitants and 152.6 in fourteen days.

– Cantabria: It has reported 55 new cases, nine less than 24 hours ago, while the cumulative incidence drops slightly to 7 days but rises to 14, and there are also more hospitalized and the number of ICU patients remains stable.

– Castile and León: daily cases of covid confirmed by test have fallen to 232 this Good Friday, 44% less than 420 yesterday, the highest figure since February 19 in the Community, and deaths in hospitals due to coronavirus have been five, three more than those communicated 24 hours ago.

– Murcia: the figures of active cases, the cumulative incidence in the last 14 and 7 days per 100,000 people, the percentage of positivity of the tests and hospitalized in ICU has been lowered in the last day.

– Valencian Community: It has registered six deaths (two less than on Thursday) and has reported 206 new cases, 18 more.