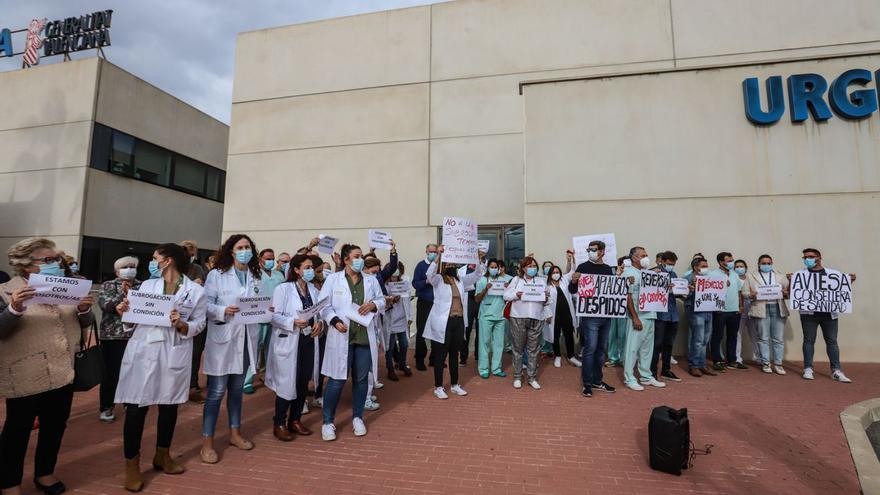 The management of the Torrevieja health department attributed yesterday the situation of “temporary” and “temporary” collapse suffered by the Emergency Service of the University Hospital, exclusively to “the lack of professionals, after the resignation of their contracts by some of the physicians who provided their services at the center “- it does not quantify how many have resigned since October 15-. He also insists that the subrogation of non-MIR doctors, which he points to as the background of this situation, “has not been possible since it would constitute an irregularity against current regulations” since 1995, with the adaptation of European legislation.

The management had to face the barrage of criticism and public complaints from the works council, doctors from the hospital itself and patients about the saturation of the emergency room on Wednesday and Thursday, with 36 patients pending admission, delays in the waiting room after triage of more than 15 hours, and blocking of tests in different services, also due to lack of personnel, which must be performed on patients of this health service.

The management recalls that with current regulations a doctor without a recognized specialty can occupy positions of primary care physician, primary care pediatrician and emergency, “as long as there is no physician with a specialty available.” The same source “regrets that many doctors have decided to terminate their contractual relationship despite the fact that their employment continuity is guaranteed.” The General Directorate of Human Resources authorized “on an exceptional basis” that non-specialized doctors could work as labor personnel. As in other centers, the professionals “would stop providing services the moment the circumstance that made the exceptionality possible disappears” and a specialist doctor is available.

Twenty of the 27 doctors in the Emergency service are non-specialized physicians. An employment situation that Ribera Salud did not report in its fifteen-year concession, but which was not audited by Health either. At least five of them have left the service since October 15. Others quit before the rollback. Three of the resignations have occurred between Tuesday and Thursday of this week, without the right to compensation, in some cases after more than ten years of indefinite contract in the health center.

“Due to this circumstance,” said the department’s management yesterday, the Hospital Medical Director “took over the emergency service in person, with the direct support of specialists from the orthopedic surgery and traumatology services, general surgery, cardiology and ophthalmology ‘. Emergencies, clarified the Ministry of Health “has been reinforced with internal medicine practitioners, with the aim of alleviating the pressure on care” and solve the “conjunctural situation that the emergency door is experiencing.” Thus, in the opinion of the center’s management, “the adequate provision of the service has been guaranteed at all times.” During yesterday the emergency service “was adequate, providing urgent assistance and managing to restore normal response times.”

The University Hospital continues to provide, according to Health, “assistance of the highest quality, constantly reviewing the traceability of healthcare circuits and reinforcing the staffing of professionals in key services.” The safety of patients and professionals “has in no case been compromised as a consequence of this temporary circumstance.” The management and general direction of Human Resources is “making a significant effort to complete the templates and reinforce each of the services that require it.” Health recalls that the lack of collaboration on the part of the concessionaire that managed the Department until October 15 -Ribera Salud-, has made it difficult to adopt measures in an early manner.

Ribera and Health have collaborated in other areas. The Generalitat has awarded a good part of the outsourced services of the department to this same company, which it terminated management, with emergency contracts, in the case of all clinical analyzes, worth 16 million euros only for the year 2022.

The management assures, on the other hand, that it is “in constant communication with the municipal councils of the department – it has called for today a meeting with the ten mayors of the area -, and” that a meeting recently took place to present the management team with the mayors from the Department”. Its management, headed by Pilar Santos, maintains that it “works with an open door policy”, available “constantly” to professionals, the works council and middle managers of the organization. “Communication with the different levels is fluid, and permanently open to dialogue.” Statement that contrasts with the accusations of the unions and doctors who assure that the management has turned its back on them.

The management also indicates that it is available to patients, professionals, institutions, social entities and the media, in order to resolve any issue that may arise.