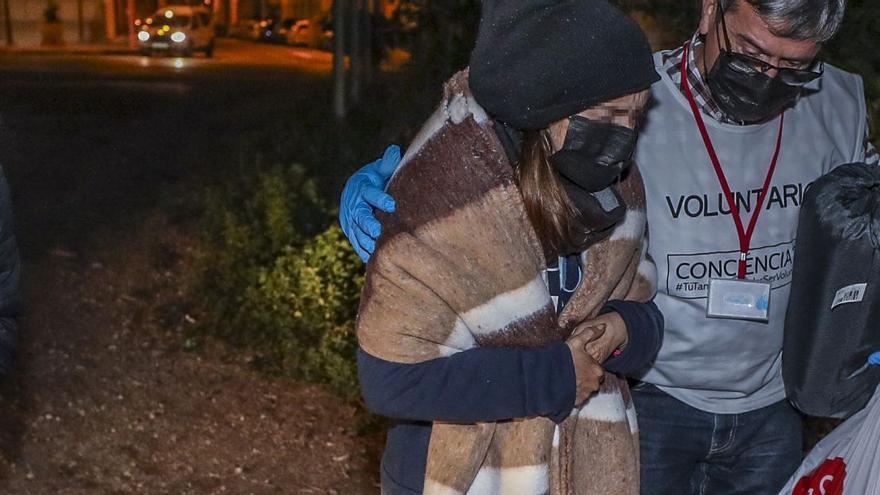 Solidarity. Entities such as Conciénciate and Alicante Gastronómica Solidaria distribute broths, coffees and hot meals on the coldest nights. When the thermometer reads 5 degrees or less, like these days, they also distribute blankets and sleeping bags.

A steaming broth, a plate of hot food, a cup of coffee, a blanket, a sleeping bag… Any help is good for the more than 400 people in the province who have to sleep outdoors when the thermometer shows temperatures as low as those that are coming for the next few days. There are many entities, from the Red Cross to Caritas, that are responsible for supporting those most in need. In the case of the volunteer association that emerged in Elche Conciénciate, and that has already spread to the provincial capital with the nearly 500 young people that make it up, and Alicante Gastronómica Solidaria (AGS) goes a step further and every week More than 3,000 menus are prepared to distribute hot dinners among the homeless.

Conciénciate volunteers go out every Friday, Saturday and Sunday of the year to meet the needs of this population in Elche, where it is estimated that more than fifty people sleep in the streets of their neighborhoods and districts, in addition to the thirty who do so in Caritas shelter. When the thermometer reads 5 degrees or less, as it happens these days, the volunteers also carry out the service, regardless of whether it is a weekend. In this case, in the city of Elche, the protocol against the cold coordinated by the departments of Citizen Security and Social Rights, together with the Local Police and Civil Protection, is activated, which establishes that along with the hot food, material is distributed to combat the nights. cold, such as blankets, gloves, hats or coats.

Action of the Red Cross in Elda

“Society usually looks the other way with homeless people, but the pandemic has given them visibility again,” says the president of Conciénciate, Gorka Chazarra. The volunteers of the association he directs collect the menus prepared by AGS at the Ciudad de la Luz facilities to distribute them in Elche. The broths, coffee and bread are accompanied by a plate of vegetables, pasta or rice, water, fruit and hot chocolate. “Sometimes we care more about the degradation of a building than about the people who sleep there”, regrets Chazarra in allusion to recent episodes in the city of Elche such as the Hort del Gat and the Huerto de la Virgen de Portes Encarnades.

“In Elche we have a census of people who sleep on the street to attend to them when the cold waves arrive and we are working on the implementation of a low-demand center so that they can spend the night in it,” advances the mayor of Rights Social from Elche, Mariano Valera.

In Alicante, reports J. Hernández, in the City Council it is pointed out that the transient shelter service is permanently activated but that the Generalitat has not activated any special protocol for care of homeless people due to the current low temperatures.

A woman begs for alms on a street in Alicante. Courteous Pillar

This contrasts with actions such as that of AGS, a movement that emerged in the confinement of 2020. More than 2,000 people and 800 companies have collaborated since its launch. Currently there are two vehicles that go out every night in the capital to distribute hot food among the most needy. “This wave of solidarity has spread to other parts of the province, such as Benidorm or Torrevieja, and also includes training for young people at risk of social exclusion,” explains its president, Carlos Baño.

Also Read  Trump acknowledges that he will not have a second term, after inciting mob

“You are very impressed when you receive such sincere thanks and it helps you grow as a person and relativize problems,” says the young Nieves Torres, one of the Conciénciate volunteers who participates in the distributions every week. From Civil Protection, Pilar Raja adds: “We cover all the districts of Elche and transfer people who need it to the Cáritas shelter.”