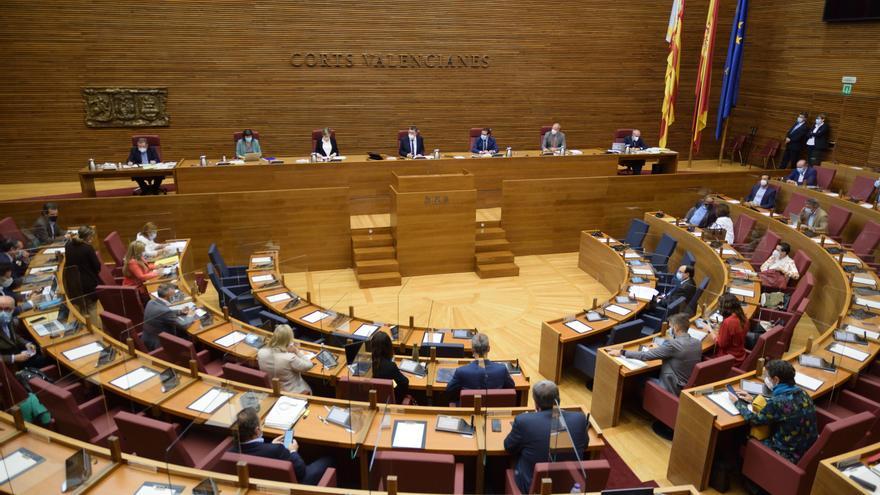 It was up to me to defend amendment number 33 of its article 21, which consisted of changing the word “compulsory” to “optional” which continued “the teaching of Valencian must be included in the Permanent Adult Education Programs.” He began by stating “that it has become clear through the Popular Group vote that we have always been in favor of teaching Valencian at the highest levels. The problem has always been that of compulsion ». To later defend the optionality amendment because the adults who go to these courses «usually go after work, they are people who have had difficulties in their daily lives to be able to obtain sufficient knowledge, I believe that leading to these consequences the obligation seems to us that there is a background that we would like the Socialist Group and the Consell to remove, voting or renouncing to keep the word “obligatorily”, changing it for the one we present is more logical than “optional” ». The deputy Mr. Luna González answered and among others he said: «Because you have said that the Castilian speakers have lost parcels of power. And this seems to me an enormously serious statement in this Tribune ». And it will end by saying. “Mister deputy, you have acted here in a way that I would say absolutely Castilian, but in the sense that Machado gave the term when he said:” Miserable Castilla, yesterday dominating, wrapped in rags, despises everything it ignores. ”

«A story reminded me of Mr. Luna’s intervention – I referred – that was told in my town, a Castilian speaker. A man was going through the door of a cemetery and he hears a voice that says: “Help, I’m alive!” It doesn’t pay much attention; the voice is heard again: “Help, I’m alive!” The man jumps over the gate, sees a head buried there, and says to him: “Alive? What you are is badly buried” ».

The amendment was not accepted. Law 4/1983 of November 23 on the use and teaching of Valencian, was approved.

Today, as in the story, they have thrown dirt on Spanish to bury it and strip it of its quality and quality of being a vehicular language when living with other languages, otherwise it would not make sense. And it is forgotten that article 3.1 of the Spanish Constitution establishes that “Castilian is the official Spanish language of the State.” As well as in this sense our Supreme Court, 3rd Chamber, has ruled in sentences 25-1-84, 1-5-84 and 28-3-85, for all, which recalls and proclaims that “the official language of Spain it is Castilian, so any neglect or discrimination with respect to it violates the spirit and letter of article 3.1 of the Constitution.

I would also like here and now to cite some paragraphs of the article that the illustrious politician Don Emilio Castelar, who was president of the Executive Power of the First Republic (1873 and 1874), wrote under the title The Spanish Language, as a direct opposition to these new Republicans to the Violet for its unacceptable deprivation of the quality of the vehicular language of Spanish. In his article he began by stating: «But above all our creations, the creation par excellence of Spanish ingenuity rises, our language rises: From various and intertwined roots; of multiple and chord sounds: of onomatopoeias so musical that they open the feeling to the divination of the words before knowing them; sweet as the softest and most rumbling melody with the most thunderous thunder; emphatic to the point that only in her can one speak with dignity of supernatural and familiar things to the point that no other has taken advantage of her in the funny and the picaresque; so proportionate in the distribution of vowels and consonants, that neither the hollowness of voice demanded by certain towns of the south, nor the rolling of pronunciation demanded of the lips and teeth of the North has been needed.

«Unique in its formation, because on the Latin background and the Celtic and Iberian ramifications the German has put some of its voices, the Greek some of its enamels and the Hebrew and Arabic such tiling and garlands that make it without a doubt the most common language. own, both for the natural and for the religious; the language that most lends itself to various shades and nuances of modern eloquence. ‘

Today it has been possible to land, as in the head of the story, on Spanish, with the clear intention of burying the fact of being the only official language of the State. And I agree with Julián Marías in his Freedom at stake when he denounced that:

“Something is taking place that did not exist at all and that deeply worries me: exasperation. Innumerable Spaniards, from all social strata, from all ideologies, feel uncomfortable being watched, manipulated, harassed.

I think it is time for the king, as authorized by the Spanish Constitution in its final provision, to reiterate firmly, as head of state:

“I command all Spanish individuals and authorities to keep and make keep this Constitution as a fundamental rule of the state.”