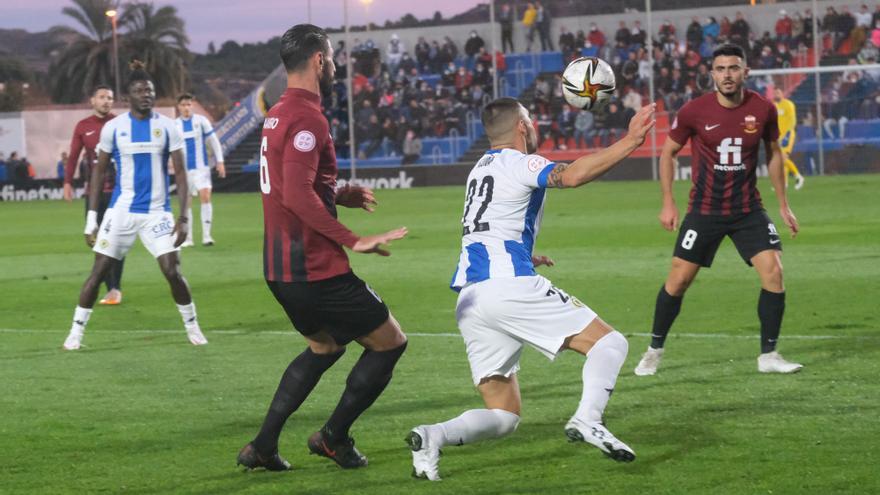 A fatalistic cliche, a commonplace. A disgrace. Other. The fourth in a year. El “Toro”, just like the day he debuted as a blue and white, marks, is injured shortly and his team wins … a point, a trifle compared to those who have sewn his skin since he landed in Alicante.

His pain when he retired was everyone’s, that of modest football full of frustration, full of anger, sad stories, those of its protagonists and those of the spectator who pays his ticket or a television subscription. Acuña’s pain sprayed a derby with anguish marked by the huge equality Resulting from facing two diametrically opposite ways of conceiving the game, perfectly valid, although not equally luminous. Romero wanted the ball from the first minute and Mora did not dispute it. He let him start play from behind without raising the pressure line, dosing forces, compacting the 4-4-2 again.

The sensation from outside was that of see on the grass a clear dominatorbut no, it really wasn’t. Possession, no matter how much, did not turn into dangerous actions, which only came from set pieces, hanging balls. The two blocks were looking for the area with a different recipe, but they arrived by the same path, that of strategy.

Without Pedro Sánchez or Álex Martínez, last minute casualties, the person in charge of serving the balls from the corner was Elliot. He reached out his right arm, spread his palm, curled his thumb, and sent to the heart of the area. Acuña attacked the space, threw himself on the plate, stuck his head in, and his nose for matador forward, He advanced to Hercules on the scoreboard. He celebrated it on his knees, it should be the beginning of a beautiful story, one with a happy ending, his, the one he deserves for so much fight, but it was not like that. After five minutes he heard a click in his knee and, although he tried to continue, he ended up lying on the ground, the pain forced him to give up again. Cynical luck.

Raúl González took his place and the stake maintained the same discipline, but now, with the poison of both against him, Eldense had a much harder time developing football. The lack of confidence due to the absence of favorable results slowed down the initial momentum of the Catalans and accommodated the Blue and Whites in a match that packed the first half smoothly, without notable stops.

Everything the same, also the protagonists. It did not improve anything. Loud rhythm, zonal control and no transition, with Raúl Ruiz disconnected being a replica of Pedro Sánchez from the previous days, entrusting all the offensive production to the starts of César Moreno, the divided balls won by Bikoro and the fight above the substitute of the Bull, a treasure playing from behind, acting on the outside, not just on the inside.

Hercules felt superior for the first time in the resumption. Romero appreciated the detail and activated a triple change to find a way to cut through the dense steel mesh that seemed to cover Jesús Fernández’s goal.

Aarón Ñíguez and the two González, Julen and Juanan, agitated the attack somewhat, nothing serious. The team in the capital was so comfortable that they lowered the piston for a moment, believing themselves superior. He was wrong. The passivity of the Herculaneum defense allowed Pablo García to try his luck from the front. His shot, without tension but tight, was deflected to one side by the former Real Madrid goalkeeper. He preferred not to try to catch the ball on the fly, his confidence bar is still far from overflowing, and he believed that this was the best solution, the least risky. He didn’t count on inaction around him. Neither Molina nor Pedro García were attentive, so Salinas tried again the visiting goalkeeper, who stopped the shot, again without stopping it, and Aarón, the slowest but most alive, anticipated everyone and equalized the derby.

In the next half hour, the one remaining until the end, the precision errors, the horizontal passes, the sterile races, the crashes, the falls, the simulations followed. Football, little. Intensity and equality, everything. Raúl González’s faith turned the meeting upside down. He took advantage of a loose ball in the spinal cord, ran, stepped on the area, traced the pass back to him possible shot on goal from the second row and his center ran into the defender’s hand sliding across the grass to ruin the action. Penalty? The collegiate collected it. Aketxe took the ball from the playmaker’s hands, “let me go, I’ll throw it.” Even the three minutes between the signaling and the execution did not disturb him. He deceived Enric and overtook his own for the second time. There was a quarter of an hour left. Hercules dug in, took a fifth central, Carlos David, onto the field and prepared to do what he had to do, defend the result.

It did not have the last twist, the wink of doom, the reverse of fate. An innocent ball crashed into Tano’s arm in a fortuitous way and the referee reasoned in the same way: maximum penalty. Jesus sensed the direction, but not the power: 2-2. A tie with pain, Acuña’s, broken inside.

Hercules, who on Friday assured that only Toscano, Nico and Solbes were injured, announced yesterday, an hour before the start of the derby at Pepico Amat, that two of their footballers, Pedro Sánchez and Álex Martínez, were left off the list . Aspe’s due to a «contusion on the right thigh» and the lateral one due to a «proximal myofascial condition in the semimembranosus of the left leg».