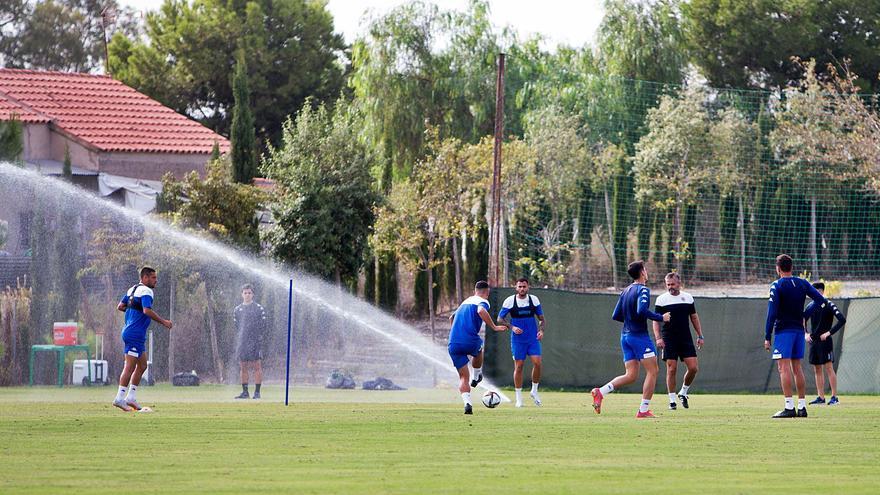 Problem in sight. Other. And just as important as the others. Hercules held his last working session at Fontcalent on Monday. For another three weeks, in the best of cases, Sergio Mora’s team will not step on the grass of the venue where it carries out most of its preparation for league matches. The squad, after the rest day (and reflection) returns today to training and will do so, for the moment, at the José Rico Pérez, although it does not rule out seeking accommodation elsewhere, for example, in the Villafranqueza Sports City, which next week it should be open to the public as a municipal facility.

Cycle exhausted. Reseeding is mandatory and urgent to undertake it. For the process to set as soon as possible and in the best way, it must be carried out before the frosts begin. The maintenance manager, Alejandro Just, who until this summer validated the replacement under the supervision of Royalverd, a world reference company in the sector, must complete the procedure with the two operators that the club places their orders daily.

You have to raise the current grass, pour a blanket of sand on which to sow the new seeds and wait for them to germinate and settle. The time estimated by professionals to complete the task successfully fluctuates between three and four weeks. Nothing of juxtaposing sod (rolls of grass ready to be used), the traditional process is recovered. It may take almost a month to reuse the Fontcalent starting field as a playing field if the regeneration cycle proceeds without incidents, usually of a natural kind: torrential rains, frosts, lack of hours of sunlight … If there are no problems and everything goes smoothly, the team could return to its own training field on November 8.

November 1st. Hercules will take advantage of the fact that they have two consecutive starts after the visit to La Nucía on October 31 to repeat the process with Rico Pérez’s turf. According to the league calendar, until November 21 the Blue and Whites will not return to practice as locals. That day they will host Murcia and, in the two previous days, they will travel to Elda and Puertollano. The plan for the restoration of Fontcalent foresees that it will be operational again no earlier than November 8 (that is the best of the forecasts), a circumstance that forces, at least, to find a place to exercise for at least a week.

The most feasible option, the cheapest and the one with the least disruption for the transfer of materials and players, is to make use of the Villafranqueza municipal facility, something for which it has permission from the City Council. The inconvenient? The blue and white interests would once again run into those of Intercity, exiled in Santa Pola while the Antonio Solana sports city is being prepared, which this week ends its own reseeding.

Both clubs – after the discomfort caused by the Herculanean presence during a stretch of the preseason in what they understood to be “their field” caused in the board chaired by Salvador Martí – they reluctantly agreed not to mix their work routines except in situations of emergency.

It is time to decide if it is. Enrique Ortiz must choose between “annoying” his neighbors or spending what it is worth to move all the equipment and its material out of the capital after paying the rent of the field at least one week.

The commission of the centenary of Hercules chaired by the former rector of the University of Alicante Manuel Palomar presents today, at noon, in the press room of the José Rico Pérez stadium, its program of events and publications to commemorate the century of life of the blue and white entity , milestone that will be reached on October 20 next year. Today, just when the club reaches 99, the members of the committee, who work independently, but not with their backs to the SAD of the Ortiz family, will show the redesign of the shield that will personalize the events that are held throughout all exercise.

The manufacture of an exclusive shirt agreed with the clothing firm that dresses the Alicante team is also planned to be used as a first kit, in principle, next season. Books, exhibitions, lectures and even the recording of a documentary will have as their sole motive the hundred years of history of Hercules.