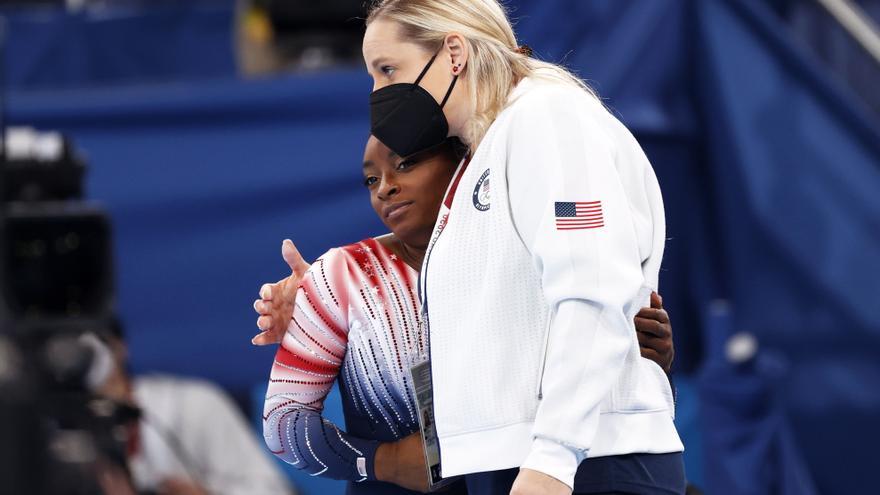 The Tokyo Olympics, the most difficult and decaffeinated in history Due to the coronavirus pandemic, they closed this Sunday with performances and phrases to remember.

From the “here we are going to burst heads” of the Spanish boxer Enmanuel Reyes Pla to the “after my performance, I did not want to continue” of Simone Biles, who put the mental health of elite athletes in the spotlight.

“DID THEY SAY THAT A TYPHON WAS ENTERING TODAY, DIDN’T YOU? BECAUSE HERE IS THE TYPHOON ENMANUEL GIVING STICKS. MY RESPECT FOR JULIO, BUT HERE WE ARE GOING TO START HEADS “

Emmanuel Reyes Pla needs very little to grow. He is like that. And if you add that on his debut in the Olympic Games won by KO in the second round al, until Tokyo 2020, silver medalist such as Kazakh Vassiliy Levit… the shaker was shaken.

In the first days of the Games, typhoon Nepartak threatened the dispute of some of the events of the same, but It was Emmanuel who proclaimed himself a typhoon and, asked about the difficulty of his next rival, left an iconic phrase, augmented by his Cuban accent – born in Havana and nationalized Spanish -: “Here we are going to tear off heads.”

From unknown to trend. A star was born though his story ended abruptly in the quarterfinals, falling with controversy against the Cuban Julio La Cruz. “The fight was a robbery. They politicized it,” said the Spanish fighter.

“AFTER MY PERFORMANCE, I DIDN’T WANT TO CONTINUE. I HAVE TO FOCUS ON MY MENTAL HEALTH. I THINK MENTAL HEALTH IS MORE PRESENT IN SPORT RIGHT NOW ”

Simone Biles returned to stop the world of sports. But this time she went beyond it after retiring on the second day of competition, overwhelmed by pressure. He suffered an episode of mind-body disconnection that prevented him from doing his exercises. He only participated in the bar final, in which he did not need to do pirouettes, and won the bronze medal.

The American gymnast brought to the Olympic stage the problem of the mental health of athletes who He had already taken another participant in the Games, the Japanese tennis player, from the circuit for almost two months Naomi Osaka.

His phrase was and his movements were the center of information for days. He put on the map a problem that several athletes suffer, but in silence.

“What Happens in Vegas, stays in Vegas” applied to sport. French Clarisse Agbegnenou won the judo gold medal in -63 kilograms against her friend, the Slovenian Tina Trstenjak, and wanted to make it clear before the fight that their union was not going to affect.

They also had pending accounts. In Rio 2016 the result was the reverse. So, tie.

The Tokyo Olympics were historic. In addition to being disputed in the middle of the coronavirus pandemic, because they included a team of refugees.

In addition, the International Olympic Committee (IOC) allowed athletes to make expressions of a political, supportive or social nature. on the field of play, provided that it occurs before the start of the competition or its presentation, and provided that the expression or gesture is consistent with the fundamental principles of Olympism.

This led to claims against racism, kneeling before the start of the matches, and the phrase of Masomah Ali Zada. Necessary despite being already in 2021.

“I WAS GOING TO MEET SAM (KENDRICKS) AT THE VILLA TO HAVE COFFEE, BUT I WAS TALKING TO MY GIRLFRIEND FOR A LONG TIME AND I COULDN’T. SO THANKS TO HER WE WERE NOT TOGETHER”

The coronavirus has marked the agenda of some Olympic Games that in spite of this have been able to develop until the end. There were cases of athletes within the Olympic Village, but they did not prevent their dispute. Sometimes, as a matter of luck.

As happened to the Swedish athlete Armand Duplantis, to whom a phone call with his girlfriend freed him from at least being close contact with a positive, and ultimately not winning the gold medal in pole vault.

When you break a longevity record, you can get the good part, or the bad part. The latter did, yes, as a joke, the canoeist Teresa Portela after being asked what it meant to her to compete in her fourth Olympics.

An Olympics in which, speaking of longevity, the Spanish ‘Chuso’ García Bragado broke the record with eight participations at 51 years old.

“I GAVE THEM TO A FAN. THEY SMELLED VERY BAD”

A poisoned gift, the fan who received them will think. French basketball player Gabby Williams came out to the mixed zone to speak after winning the bronze medal by beating Serbia. Surprised doing it without slippersbut, for her, she had a reason. He gave them away.

“EVERYONE HAS A PLAN UNTIL YOU ARE PUNCHED IN THE MOUTH”

The American Richard Torrez Junior endorsed the phrase of Myke Tyson after losing the heavyweight final. He was not comfortable during the fight and, of course, on top of a ring, it pays dearly.

It has always been said that goalkeepers are different people. They occupy that position in which when one is small nobody wants to put themselves. But it hardens you. And if they don’t tell the guardameta de waterpolo húngaro Viktor Nagy, who was one of the culprits that his team won the bronze by beating Spain thanks to the fact that he stopped two shots with his face.

“MY DAUGHTER ASKED ME FOR SILVER A LOT YESTERDAY. AND I SAID: ‘NO, DEAR, WE WANT GOLD’. BUT SHE INSISTED TO ME THAT ‘SILVER IS MORE PRETTY’. SO HERE IT IS. SHE REQUESTED IT AND HERE I HAVE IT ”

Now that it is fashionable to remove the runner-up medal from around your neck, something, on the other hand, atypical in an Olympic Games, living in defeat has more merit. And it is that, even if you lose a game and have the gold so close, silver is an achievement available to very few in the world.

Even the Brazilian volleyball player made her daughter happier with said silver. You liked it better, and now you can enjoy it at home.

“THE BEST OF ALL TIME? WHAT STUPIDITY. BUT IF THIS SPORT IS 10 YEARS OLD. HOW MUCH I WILL BE THE BEST OF MY GENERATION ”

Dusan Bulut, 3×3 basketball player for the Serbian national teamThus, he got rid of the pressure of going to the Games as the best. The Serbs were finally bronze.

Tedros Adhanom Ghebreyesus said it, Director of the World Health Organization, at the IOC Session preceding the Games.