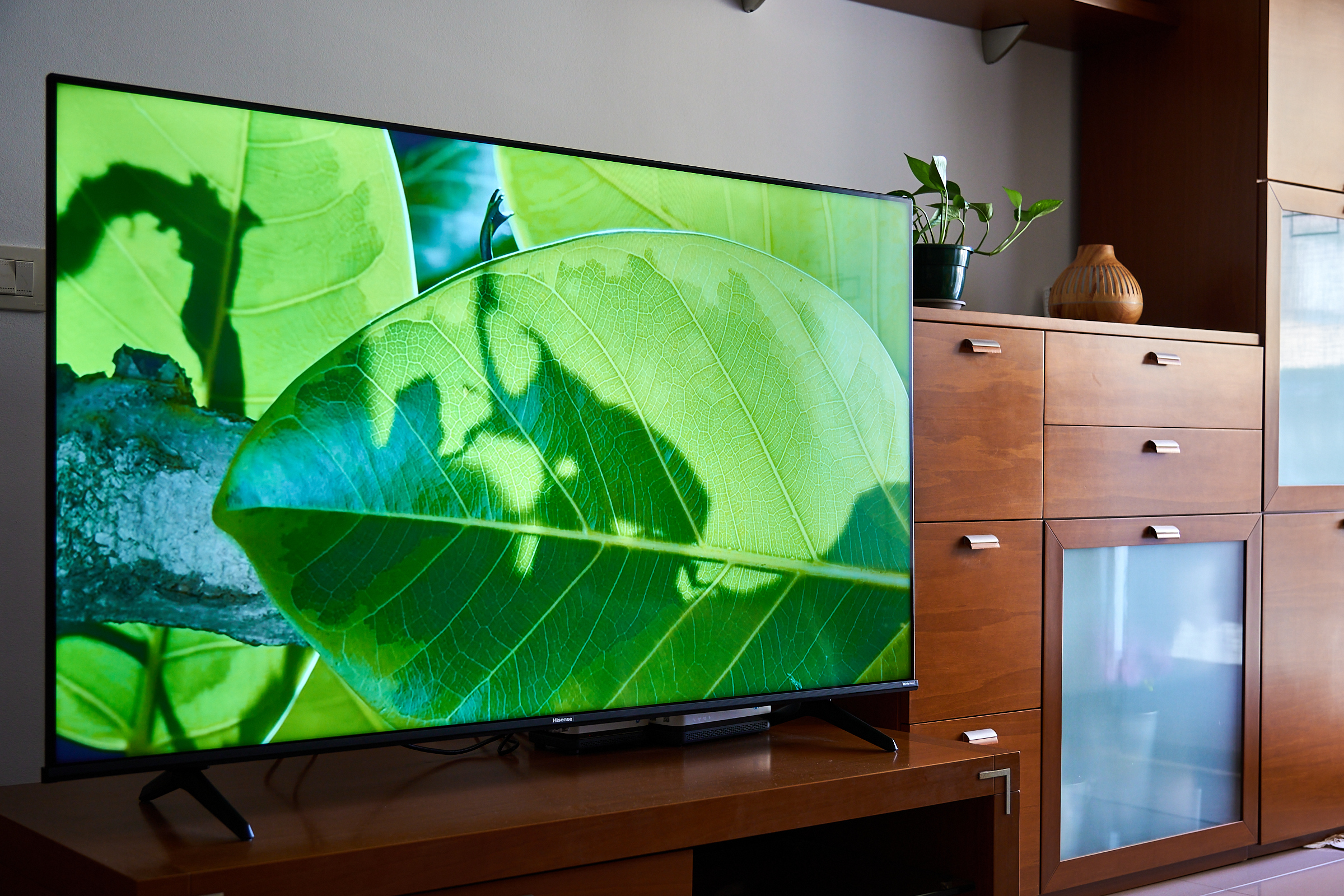 Find a good, nice and cheap tv It is, on many occasions, more complicated than finding a four-leaf clover, but not impossible, although to achieve it, televisions must give up everything superfluous.

Hisense has become a true specialist in designing this type of good value tvsadjusting prices throughout its catalog, but without neglecting the latest technologies in image and sound.

The 55-inch Hisense E7HQ that stars in this analysis moves in that delicate balance between offering broad HDR support, QLED screen and good connectivity, with maintaining a price of 544 euros.

Summary of the analysis of the Hisense E7HQ 55 “by sections:

Modest materials and a frameless design that highlights your remote control

The Hisense E7HQ is a modest TV, so here we are not going to find aluminum finishes with sophisticated treatments. The formula is much simpler and is based on combining good quality plastics with a chassis that provides robustness.

We are before a 55” SmartTV that maintains a contained size thanks to a design with very narrow frames that only gives up some space at the bottom of the screen where the brand logo is located, leaving space for the infrared sensor of the remote and the status LED.

The TV sits on two boomerang-shaped feet that screw into the bottom of the TV, lifting it off the table to make room for a sound bar.

If we go to the rear we find a equally sober and austere design than in the front, where the greatest design effort falls on the pattern that the central box shows where the electronics and the connectors of the television are concentrated. In this section, the Hisense E7HQ comes very complete with antenna sockets, HDMI 2.1, USB 3.0 and WiFi 5 and Bluetooth 5.1 connectivity.

The rest of the rear is a dark gray color that puts more emphasis on offering a strong chassis, than on the aesthetics of an attractive design.

The connectors are oriented to the right although they remain in the central area of ​​the television, something that it can become inconvenient to connect new cables when the TV has been installed on a wall bracket.

Hisense has not provided any type of cable management that will be hanging from the connectors without concealment options on the back of the TV until they reach the back of the cabinet.

Where he has put a lot of care is in the remote control that accompanies this Hisense E7HQ. Like the television, the remote control prioritizes the convenience of access to functions and content platforms, being one of the most efficient that I have tested lately, even ahead of high-end models.

At the top the numeric keyboard; the central part is occupied by the navigation controls of the system, while in the lower part they are grouped 9 direct access buttons to Netflix, Prime Video, Deezer, YouTube, Rakuten TV, Movistar+ and Miteleas well as two buttons to access television content.

The control has a button from which a user is invoked. voice assistant that can be configured with Alexa, the Google Assistant or the VIDAA voice service.

We come to one of the main sections in a television with these characteristics: its quality. This factor is, without a doubt, the one that makes the difference when determining whether it is worth betting on the Hisense E7HQ.

Hisense has assembled a VA panel in this model to obtain extra contrast and greater speed when representing sports and video games. It has a diagonal of 55” with 4K UHD resolution (3840 x 1920 pixels) and 8-bit color depth with FRC (Frame Rate Control).

Behind this screen we find a direct LED matrix, but not a local dimming system. In front of this panel a Quantum Dots filter has been placed in order to enhance the color trying to minimize the loss of brightness.

The strong point of this section is, without a doubt, the broad support with HDR standards among which are the HDR 10, HDR10+, HLG and Dolby Vision.

Content in HDR is managed correctly, despite having a average brightness of only 400 nits which makes the image not appear particularly vivid. However, the color processing in this type of content marked with metadata is good.

We cannot say the same with SDR or DTT television content which does not send indications of how the colors should be represented. that’s where efficient image processing is missing able to decide for itself which brightness, contrast and color setting is right.

The Hisense E7HQ has several predefined color profiles oriented to cinema content, sports, etc. We can’t say that any of them are 100% correct, but the Cinema mode Daytime is positioned as the best starting point for customizing color calibration for the best possible image quality.

All the profiles coincide in one marked lack of contrast which translates into blacks that do not go beyond more or less dark gray. Adjusting it requires spending some time trying out different levels so that images from non-HDR sources appear washed out and skins appear oversaturated and overexposed.

When the content is in HDR from platforms such as Netflix or Amazon Prime Video, things change and, the truth is that looks like a different tv. In this scenario of use the best options are those of cinema at night or, better yet, the daytime cinema which raises the brightness setting a little more to give more vividness to the color.

Install the Hisense E7HQ in a very bright room or in which you have to see it at an angle also works against it since it lacks an anti-reflection filter and being a VA panel, the viewing angles are reduced to 178º.

The 4K upscaling of content from lower resolutions leaves an image with some compression artifacts and color that, well, let’s just say could be improved. The MEMC motion processing (Motion Estimation Motion Compensation) is correct and generates action scenes with smooth movements in which the soap opera effect or flickering do not make an appearance.

The Hisense E7HQ comes reasonably well equipped for gaming, incorporating support for HDMI 2.1 standard on its three HDMI connectors. However, this support is not complete due to display limitations.

By connecting a gaming console or PC with the game mode activated, the TV recognizes it and adjusts its parameters to reduce the latency at 20msproviding a VRR limited to 60 Hz. That is, games run in 4K and with variable refresh rate, but only up to 60 Hz.

VIDAA complies with basic connectivity, but falls short of features

The operating system that governs this television is VIDAA U5a Smart TV platform that usually accompanies the brand’s televisions.

VIDAA U5 moves with amazing fluidity for a TV in this price range, switching between screens without any problem, although when you start an app for the first time it can take a few seconds to be ready to use.

We find the applications of the main streaming platforms, as well as on-demand television apps such as PlutoTV. In this sense we have not had compatibility problems.

TV setup menus are very clear and well structured into different categories and is complemented by informative dialogs explaining what each setting does. Therefore, nothing to object on this point.

The integration with the rest of the devices is not completely complete since, for example, we have not been able to synchronize the TV remote control with other external devices such as the TV on demand decoder as other brands such as Sony or Samsung do.

Correct audio to watch television, but quite poor to enjoy the movies

Audio is one of the most compromised sections for a cheap tv since it is the point where manufacturers prefer to put the scissors to dedicate resources to other areas.

In this context we find a pair of loudspeakers with a power of 4 W per channel, located at the bottom of the TV projecting the sound downwards. In this way, the bounced sound creates a greater feeling of spaciousness, but definition is also lost.

The Hisense E7HQ supports Dolby Atmos specificationsbut the delivered sound cannot be expected to have a minimum of directionality.

The sound profiles do a very good job of adjusting the audio with respect to the type of content, leaving well-defined dialogues or generating a somewhat more open soundstage in the Theater modes Y Music.

In short, they are good feelings for a TV less than 600 eurosin which the user does not expect to find a cinema sound and assumes that the installation of a sound bar is the best option.

Good value for money to watch content in HDR

We reached the end of analysis of this Hisense E7HQan honest and unassuming TV that doesn’t herald fireworks in the form of dubious features or unfulfilled technologies.

The profile to which this television is directed is perfectly defined, and we could say that it is focused on the younger public that is looking for a second tv for a room or as an affordable main TV with which to watch series in HDR from Netflix, Amazon Prime or any of the many available platforms, and play occasionally on a PS4 or Xbox Series S.

Hisense E7HQ is an entry-level television that is in a relevant position thanks to its good value for money. It offers extensive HDR standards support with HDR 10, HDR 10+, HLG, and Dolby Vision. It has a Gaming mode that optimizes the operation of the TV to achieve a latency of less than 20 ms during the game. The set is closed with three HDMI 2.1 connectors with limitation to 4K and 60 Hz.

The good results in motion processing put it in a very good position to watch sports in 4K resolution on a generous screen.

Under this premise, the price of the Hisense E7HQ remains at a price of 544 euros, becoming a serious candidate for those who do not want to invest a large sum in good value for money tv.

Also Read  The types of angles in photography: in-depth guide to know how to position the camera to capture reality