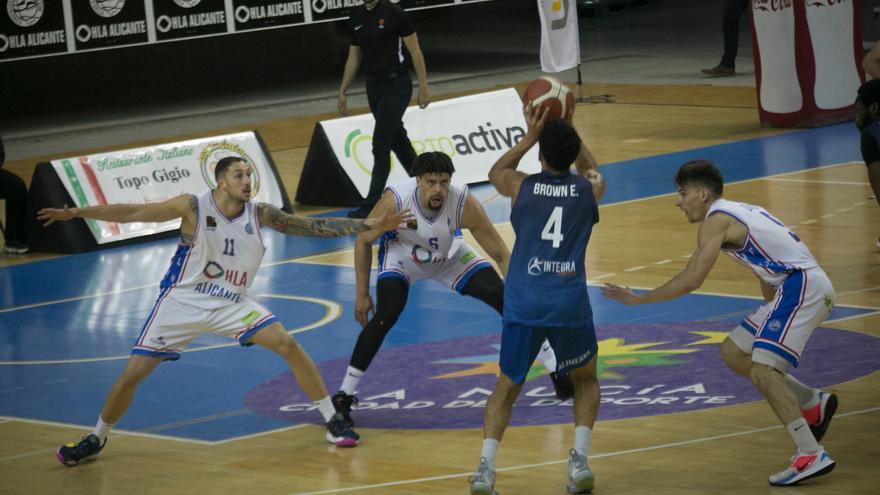 HLA Alicante started with doubts, still stagnant in the first phase, in which they lost the last three games. Misguided in shooting and somewhat contemplative in defense, Lucentum was overtaken by the great pace imposed at the start by Liberbank Oviedo, who converted their first four attacks masterfully led by Brown into the offensive game.

With a very high rhythm, the Asturian team linked advantages that were around ten points in the first quarter to reach a maximum of 13-24. Too hasty in the shot and with low percentages, Pedro Rivero’s team had to entrust themselves to the defense to minimize their errors against the opposite basket. Chumi Ortega squeezed the pressure beautifully, two baskets from Gjurovski and the contribution of Pitts, who came in from the bench, reduced the local disadvantage to 18-24 at the end of the first quarter.

Rivero returned to shake his bench in the second quarter and the entrance of Urtasun, Galán and Edu Martínez gave air to the Alicante team, who maintained his defensive aggressiveness to steal frequently and make Nacho Lezkano’s men more and more uncomfortable. So after a 6-0 partial for the Lucentinos, Pitts equaled the game at 27 thanks to a triple in the 14th minute. At that moment Arteaga committed his third foul to penalize Oviedo and HLA Alicante added its first advantage of the match (30-29) shortly after with a basket of three by Edu Martínez.

The contest was equalized in the final stretch of the first half, in which Brown emerged majestically with three consecutive baskets – two of them out of three – to return control to the visitors at the same time. There was no way to stop the American, who went to 17 points at halftime, three above his season average, and led Liberbank Oviedo to 36-42 at the end of the second quarter.

After the break, the intensity and the constant dispute on the court were maintained with a good Urtasun for the locals, who lost through injury in the third quarter to the base Llompart when the HLA had returned to take the initiative on the scoreboard (55-54) . With more spirit than success, as Rivero says, Lucentum was four behind at the end of the third quarter (55-59).

With ups and downs in the game and a lot of imprecision in the triples (eight hits out of 36 attempts), the game entered a crazy phase in the last quarter of regulation time. Arteaga pulled ex officio to increase the visitor’s income to 10 points (66-76), but at that moment, with less than three minutes to go, the HLA was reunited with its best version of fighting and race until the end. Galán led the comeback with two consecutive triples and a two plus one that took the game into extra time (79-79) after another three-shot by Edu Martínez and a shot by Pitts to the basket that could give the victory.

In overtime, HLA Alicante took the lead (84-81) with a two plus one from Allen, but Oviedo had the virtue of not giving up to turn the scoreboard (84-85) and row until the decisive play in which Chumi Ortega was unable to complete a penetration that would have prevented the Lucentum’s first defeat in a crazy first game in the league for the “play-off” for promotion to the Endesa League.