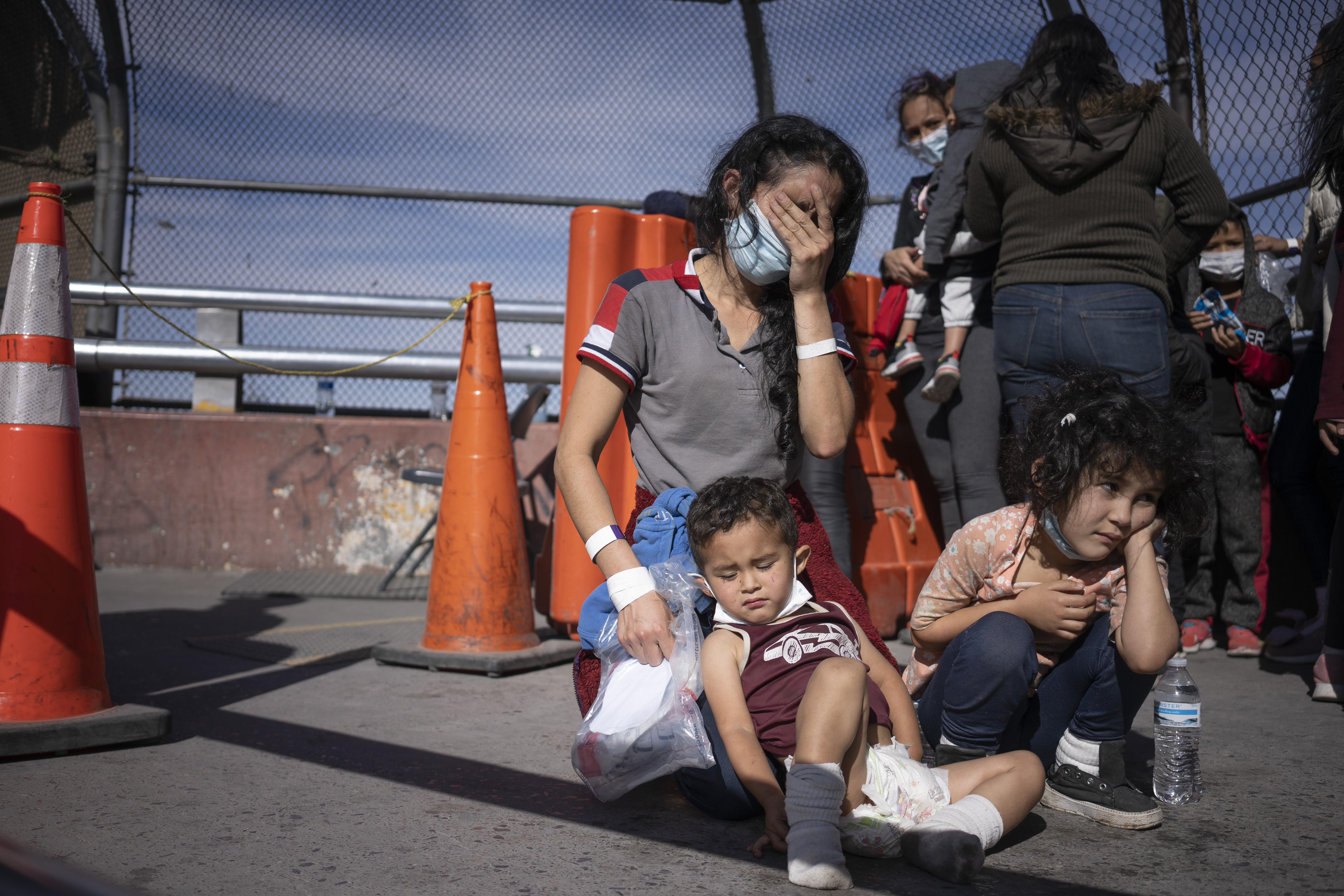 “Where I am? What country is this? Is this Honduras or the United States? One by one, clutching a bag with all their assets on their shoulders – an old mobile phone, some documents, some aspirin, and a small wooden cross – the group of Central Americans travels the bridge that connects El Paso, in Texas, with Ciudad Juárez, in Mexico, watched closely by United States police officers. The frightened migrants, most of them with children in their arms, shuffle in slip-on shoes and ask, bewildered, over and over the same question to the first person they meet: a street vendor, a civil servant, a journalist. .. “Where I am? What country is this? Many of them left their countries fleeing the violence and this Thursday they were thrown into one of the most dangerous cities in Mexico.

Vilma Iris Peraza, 28, arrived exhausted, thin and coughing. He could barely walk a few steps and collapsed on the bridge. He came hand in hand with little Adriana, three years old, who could not continue walking either and vomited on the agents’ boots, next to the plaque that marks the division between Mexico and the United States. “They tricked us! They tricked us! ”He yelled when he could get up. “They told us we were going to a shelter in the northern United States, but they never told us that we would be deported.”

It was the sad end to an odyssey that had started 15 days earlier in Honduras. Peraza says that he saw on the news that with the new president of the United States, Joe Biden, it would be possible to enter and that they were regularizing mothers with children under six years of age, so he did not hesitate to take the little girl and undertake the most dangerous journey of their life. Guided by her pollero (human trafficker), she went up through Guatemala, crossed into Mexico, from Tabasco went to Nuevo León and ended up in the last part of the country, in the city of Reynosa, in Tamaulipas.

There he waited with more migrants from Honduras, Guatemala and El Salvador, until he crossed where the pollero indicated. Hours later, she was arrested in McAllen, the first city in the United States. All of them, they remember desolate, spent four days detained in a center known as the cooler due to the low temperatures they must endure during the confinement with only a shirt on. Then they were put on a plane and left on the bridge in El Paso (Texas) to walk without stopping or looking back towards Mexico. They were more than 1,200 kilometers from where they had been detained. On Wednesday there were almost 150, on Thursday more than 220 and on Friday another 150, approximately. Like this every day for the last week.

Along with Vilma Peraza, dozens of Hondurans, Guatemalans and Salvadorans sank when they saw the flag of Mexico. “Why are they doing this to us?” Says Honduran José Dámaso. “They took our fingerprints and took us to the cooler four days, then they told us that they were going to take information from us to call our relatives. Then they put us on a bus, then on a plane, then on another bus and they didn’t tell us we were coming here at any time, nor did we sign deportations, nothing, nothing. I only ask the United States Government to give me just one chance. We were going with the illusion of giving the children a better future ”.

Leaning discreetly against the bridge fence, Norma López and Dámaso, with two children clinging to their legs, cry inconsolably with their heads buried in their hands. “They deceived us, they deceived us, why are they doing this to us?” Repeats the father, who argues that they did not have the opportunity to explain to a judge that they crossed three countries fleeing the violence.

None were informed that they were going to be sent back to Mexico and as they walked they began to be aware that everything had fallen apart. The biggest frustration, however, is that the United States does not return Central Americans who have seen their hope dashed, but ruined peasants who owe even their home after borrowing to pay the pollero between 10,000 and 15,000 dollars to cross them to the other side of border.

At the same time that this was happening, very far from there, an ad was broadcast in a pounding way on local radio stations in Honduras: “Don’t come, don’t risk your family and your children and don’t expose yourself to the dangers of the road. This is a message from the United States Government ”. The ad sounds over and over again, spoken by a male voice between supermarkets and soap brands. In case the message was not clear enough, Joe Biden and Roberta Jacobson, coordinator of affairs for the southern border, repeated it several times this week: “Don’t come.”

The number of migrants trying to cross the U.S. border has been on the rise since April, with the 100,441 recorded last month the highest in the past two years, caravans included. Border arrests during the final months of Donald Trump’s presidency reached some of the highest levels in a decade, and illegal crossings have skyrocketed since Biden took office. In February, arrests grew 28% from the previous month, and in March the figure will be even higher with about 4,000 arrests a day, according to Customs and Border Protection (CBP). Since October 1, authorities have registered more than 396,000 migrant crossings compared to 201,600 during the same period last year.

Against this background, the debate between Republicans and Democrats revolves around the term “border crisis” and they attribute to Biden a ‘call effect’ that has overwhelmed all the shelters in Texas and has forced the installation of an El Paso parking lot, a convention center in Dallas, a NASA compound in California, and a tent camp in Arizona. At the same time, the number of children entering the country alone has skyrocketed. Although they have been traveling with their parents since leaving Central America, many prefer to separate in the hope that they will begin a legalization process before they return to the poverty and violence from which they fled. This Monday, the border patrol captured 561 unaccompanied children, a number that breaks the record of 370 that was reached in May 2019 with Trump or the 354 in June 2014, during the presidency of Barack Obama. According to the Associated Press, the daily average was 332 unaccompanied children in February, a 60% increase from January.

Today the border is a schizophrenic place where Central American chaos, old Trump policies – which forced Central Americans to manage humanitarian asylum in Mexico – mix, the new measures approved by Biden – who reversed the measure and accepted the entry of 50 people a day—, Mexico’s response, where they all travel, and the hole of poverty that Central America has become, aggravated by recent natural disasters. To all this, two novelties are added: covid-19, as an argument to immediately expel any asylum seeker, and deportation to remote places, 1,200 kilometers from where they were detained, where the only person they trust was. : his pollero.

In response to the increase in migrants crossing its territory, Mexico decided this Friday to close its southern border and deploy thousands of members of the National Guard and the Migration Institute (INM) to stop the arrival of Central Americans. Shortly after, Washington announced that it would ship 2.5 million leftover AstraZeneca vaccines to Mexico. According to both governments, vaccines and border closures are unrelated issues. However, the pressure from the United States to Mexico to help solve the immigration problem is increasing. The United States faces the largest increase in migrants on its southwestern border in 20 years, National Security Secretary Alejandro Mayorkas acknowledged this week.

To these ingredients is added the hyperactive role of Trump on the border. Illegal emigration, the wall and border security were the linchpins of the successful campaign that led him to the presidency in 2016 and the migratory chaos on the border has once again become the star issue in the face of a hypothetical return to power. a victory for the Republicans in the legislatures next year. Trump leads a chorus that agitates the word crisis, although he hides that the current migration trend began when he was still president. The explanation for this increase, more than with the change of government, has to do, among other things, with violence, political instability and hurricanes. And e Iota that hit Central America in November, one of the most vulnerable areas in the world to climate change, and ended up destroying the battered economy of the so-called Central American Triangle.

According to Enrique Valenzuela, general coordinator of the Chihuahua State Population Commission, this is something they had not seen before: “Migrants don’t even know where they are when they arrive,” he explains in his office, on one side of the bridge that separates the two. countries. Valenzuela criticizes that people “are being expelled under the so-called title 42, which has to do with a health policy [para prevenir la propagación del coronavirus], not with an immigration policy ”on the part of the United States. “So, as long as the risk of the pandemic prevails, people who enter with the intention of requesting international protection continue to be returned …”.

Before Valenzuela finishes his sentence, three other buses with almost a hundred terrified Central Americans arrive at the bridge and are forced to get off and walk in a straight line towards Mexico. “They arrive very anguished because they entered with the hope of obtaining political asylum, deceived by the polleros and confused by the income of those who are registered in the Migrant Protection Programs [MPP, por sus siglas en inglés], who after waiting up to two years in Mexico have begun to access the United States after registering with the United Nations thanks to the change of law ordered by Biden ”.

Democrats refuse to talk about a border crisis and prefer the euphemism “defiance” to say that they have not lost control of the border, noting that in 2000, some 9,000 border patrol agents detained, on average, almost 137,000 undocumented persons each month. This year, between October and February, the average was just over 76,000, but the number of police officers assigned to surveillance is more than double compared to 2000.

According to Father Francisco Javier Calvillo, director of the Casa del Migrante in Ciudad Juárez, the oldest shelter in the border city, “there is a ‘call effect”. “Many migrants from Central America and Mexico are arriving, it is also filling up with polleros and political asylum is taking between one and two years. At the same time, the United States, through Article 42, is expelling migrants from the country, and there are many children, to the indifference of the Mexican Government, ”says the Scalabrinian missionary in his shelter, overwhelmed by a humanitarian task that they resolve with more will and enthusiasm. that money the religious and civil organizations.

In his opinion, after several months watching his shelter fill up, Trump and Biden turned out to be the same, albeit with different methods: “The first hit the table and threatened tariffs on Mexico to achieve his goal and the second used diplomacy. and vaccines to achieve the same goal: that no more migrants arrive ”.