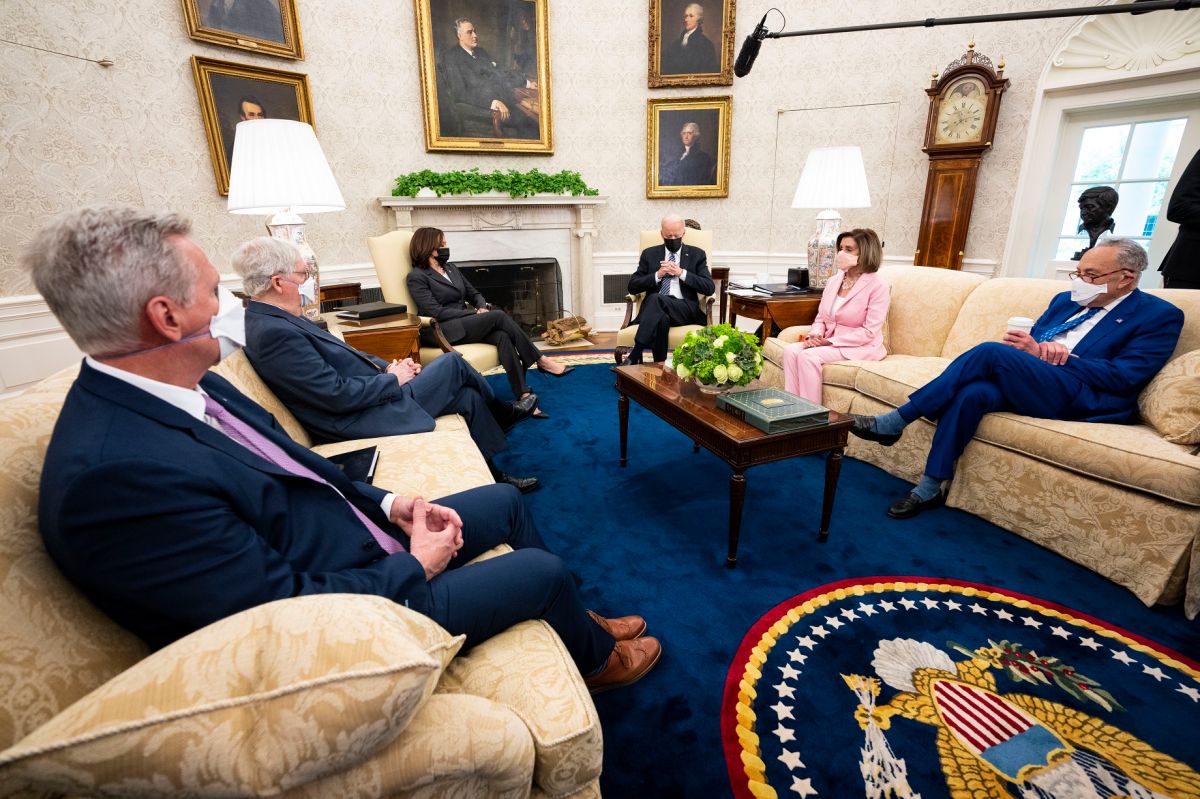 Vice President Kamala Harris was also at the meeting.

A first meeting between President Joe Biden and the group called the “Big 4” of Congress focused on two key issues, infrastructure and taxes., as revealed by the White House and the leaders of both parties in the House of Representatives and the Senate.

However, they also talked about the Plan for American Families and the different projects it contemplates to improve the quality of life of children, mainly, the Biden Administration said in a statement.

It was unclear if a potential fourth stimulus check was addressed, which has pushed for a few weeks a group of more than 70 Democratic congressmen, although the leaders Nancy Pelosi (California), Speaker of the House of Representatives, and Chuck Schumer (New York), of the Senate majority, have not publicly expressed their support.

“President Biden hosted the bipartisan, bicameral Congressional Leadership for a productive meeting on how to make government work for American families during this time of crisis,” the White House said.

The meeting was especially significant for the attendance of minority leaders, Mitch McConnell (Kentucky), Senate, and Kevin McCarthy (California), House.

In its report, the Biden Administration indicated that the almost two-hour dialogue had a particular focus on infrastructure, a subject in which they agreed that a prompt investment was necessary.

The Democratic president – accompanied by the vice president Kamala Harris– would have made clear to Republican leaders his interest in bipartisan projects, in line with his campaign promise to integrate the voices of opponents.

“He believes that there are many crucial areas in which his administration and both parties in Congress can come together,” the report added. “At this unprecedented time, the American people expect us to put the interests of families above our disagreements.”

The Biden Administration emphasized to Congressional leaders that the competition from the US is not in the country, but with the rest of the world, because “other countries are not waiting” to lead the 21st century.

As we leave the meeting this Wednesday, McConnell and McCarthy agreed that they will reject any attempt to modify the tax payment, in reference to the 2017 reform, which reduced the corporate rate.

Neither party’s leaders addressed a possible debate for a fourth stimulus check, as Democratic representatives and senators have been asked of President Biden.

This discussion could get complicated, as the country expands the application of aid from the Rescue Plan to companies and small establishments, advances in vaccination and eases restrictions on indoor mask use.

Congressional sources had already told this newspaper that there is no formal project on an extra aid similar to the $ 1,400 that the IRS continues to distribute.