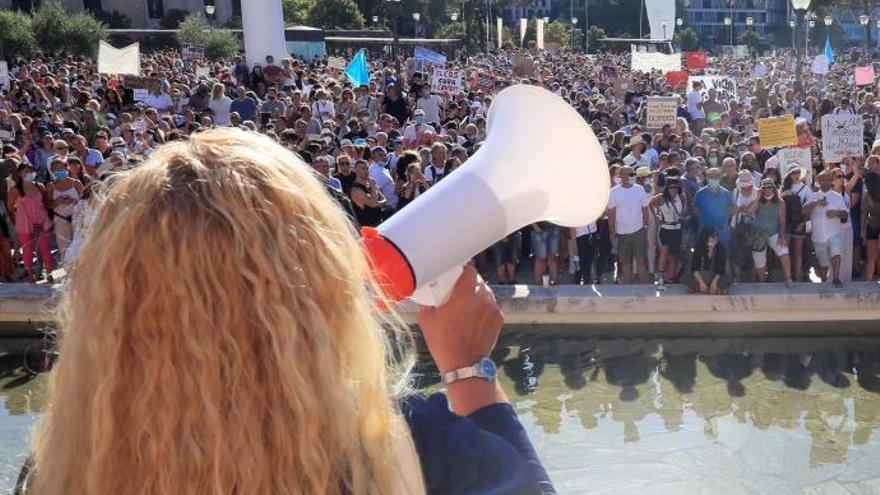 “Uncensored: you will not see this in the media,” warns a message that reaches our mobile phone along with a video in which a respectable face identified as an expert cites data and sources to show us that they lie to us … Although in reality the he is lying to us.

The fake messages they are everywhere and anyone can make the mistake of believing them and helping to spread them.

However, there are some clues that help us identify them and mistrust what they say.

A first warning sign that we can see in many of these messages is that their authors claim that they tell the truth in front of politicians and the media, or what they summarize as “the system” to refer to the powers and institutions with decision-making capacity of a society.

Almudena Zaragoza, a member of the denialist association Biólogos por la Verdad, defends in a video published on the platform’s website that her group wants to “give a completely different vision” to that shown by “the entire television cast” and “terrorist pseudo-journalistic” and the “politicians”. “This is all a sham,” he adds.

The usual appeals of deniers to “wake up” to a great lie from the established powers that manipulate us “like sheep” and the “censorship” of the media is usually the prelude to a speech with which someone tries to deceive us at the same time.

This starting point is very advantageous for defenders of conspiracy theories because it allows them to assure that they are the ones who are right: if someone contradicts them, they are “part of the system” and, according to their perverse logic, the system always lies.

This circular reasoning is one of the keys that helps make falsehoods popular and difficult to disprove.

They can fool us with false casual relationships

There are publications on social networks that warn us of the danger of scientific or technological innovations that have harmful consequences that have not been sufficiently explained. They are based on new data or facts that had not occurred before that breakthrough occurred.

A few months ago, several Internet users related the installation of 5G antennas to the death of pigeons in Barcelona.

Another key to the persuasiveness of lies in the networks is that they use very eloquent arguments that seem valid at first glance but that in fact use false connections between the initial statements and the conclusions.

It is what in logic are called “fallacies”.

One of the most common among conspiracy theorists is the “post hoc” fallacy, also called the “false cause.”

According to this type of approach, If one event happens to another, the second is a consequence of the first, ignoring other possible causes.

In the example cited, those responsible for the dissemination of these messages did not take into account that the most likely hypothesis of the death of these birds was accidental poisoning, as reflected in the autopsies.

Official data that can be consulted on the internet offer clear information about a thesis denied by public institutions.

With the advance of mass vaccination, the misrepresentations that denounce the growth of deaths of people who had been injected with these drugs have increased, as reflected by official notification systems in Europe and the United States.

There is misleading content that highlights the increase in deaths or abortions in vaccinated against covid-19 and for this they refer to official data, but it is again a miscorrelation or “false cause” fallacy.

Those responsible for these infundios make a biased reading of the data, for which they take advantage of the complexity of its interpretation.

In the case of the European EudraVigilance system, its reports explicitly warn that it should not be inferred that the effects observed after the use of a drug are necessarily a consequence of the administration of that drug, which is not taken into account by those who spread these falsehoods.

A prestigious degree does not protect against stupidity

On many occasions we receive messages led by scientists that explain why public institutions are lying to us and why we should not heed official recommendations. In their interventions they underline their condition as experts to support the validity of what they say.

The health crisis derived from the pandemic has led to the creation of associations of denial scientists such as Doctors for Truth or the aforementioned Biologists for Truth, among others. The most active spokespersons for these platforms often invest themselves with the authority supposedly provided by their academic qualifications or professional experience to rmake lame assertions that go against scientific evidence.

The fact that the authors of these misleading messages present themselves as experts because they are scientists is a way of resorting to the “ad verecundiam” fallacy, which is a tricky appeal to the authority that their profession would supposedly give them, even if his claims are meaningless.

The same deceptive trick occurs when they cite reputable alleged sources whose conclusions have not been properly verified.

In these cases, it is convenient to be wary of doubtful statements that do not have sufficient scientific consensus and it is advisable to follow the advice of the most prestigious authorities and institutions in the field of knowledge in which the messages of the supposed experts are framed.

Every argument can be ridiculed

The ridicule of the adversary’s arguments is a frequent technique in everyday discussions, but also in disinformation. We can notice this when we observe exaggerations with which it is intended to caricature a position with the aim of questioning it.

For years an alleged letter from a teacher at a public institute has circulated on the internet in which she criticizes the use of the feminine “president”, validated by the Dictionary of the Spanish Language, for which she resorts to expressions such as “ignorant and ignorant”, “journalist” or “unionist”.

Those who employ this kind of ruse incur the logical fallacy of appeal to ridicule, with which they avoid giving valid arguments against the idea to which they oppose.

In the example mentioned, whoever rejects in this way the use of the voice “president” uses this strategy as an easy way to attack the use of a female endorsed by the 23 members of the Association of Academies of the Spanish Language and documented since the 15th century.

These are some of the most common traits in misleading content that is disseminated on social networks and by mobile phone through text and video messages. Detecting them can help protect us from misinformation, to which we are all vulnerable.