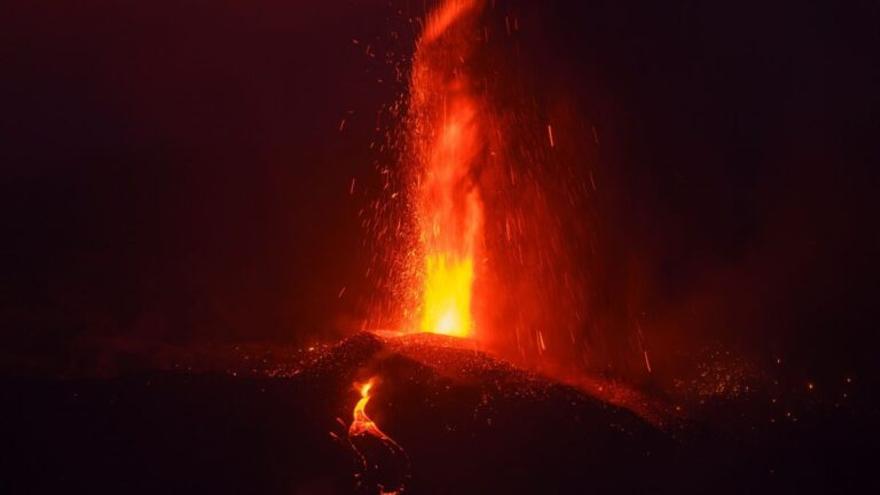 It has already passed. Last night, after days of an inexorable advance towards the ocean, the lava reached the sea. And that always poses a significant health hazard to all those who may be affected by the effects of that “impact.”

It is always one of the crucial moments in the eruptions of volcanoes due to the consequences it can have for health.

Because lava, which is at just over a thousand degrees Celsius, comes into contact with ocean water, which is currently at around 20-21 degrees.

And since seawater is made up of sodium, chloride, magnesium, sulfur, calcium, potassium, bicarbonate, bromine, strontium, boron, and fluorine, the steam that is produced is not harmless water vapor. And that’s why you have to take precautions, vacate the areas, put on well-fitting masks and stay home with the doors and windows closed.

Huge plumes of smoke will rise over the sea that will be toxic and corrosive to people.

So much so that in the last terrestrial eruption on La Palma, 50 years ago, a person died from inhaling gases a few kilometers from where the lava and the sea had joined.

The dangers that may exist once we have reached this point are plentiful.

And many of them depend on the direction the wind blows and its strength.

The predictions for these days predict that the wind speed does not exceed 11 kilometers per hour. And it is foreseeable, given the dates in which we are, that as it is the time of trade winds the wind will continue to blow towards the sea in the area of ​​”impact”.

A fact that helps to think that the toxic cloud can move away from the earth, with which the consequences of the gases that it can emit would be less and there would be less danger.

But in any case, the authorities have already defined an exclusion zone of 2 nautical miles.

What toxic gases are triggered?

We already know that temperature is one of the biggest dangers we face when there is an eruption. But there are a number of invisible and even odorless gases that also put people’s health at risk.

Each volcano is unique. And depending on the type of eruption, the gases it emits also change. But due to the very composition of sea water, the emission of gases is aggravated when the lava reaches the coast.

The instant the lava fell off the Palma cliff, when it came into contact with the water, a huge temperature shock took place, creating giant columns of steam. An intense fog whose main gas is water vapor, since the sea evaporates very quickly. But he’s not the only one.

In that column of fog there will be toxic gases that will be released in large quantities. And the risk increases with certain weather conditions, which can drag that cloud many kilometers away. So many that it is planned to reach the peninsula.

Hydrochloric acid, which can be fatal

Hydrochloric acid is one of the most dangerous gases that appear at the moment of impact. An acid that in Spain is commonly known by the name of salfumán. It has a very annoying and irritating odor and is particularly harmful to health.

It is a gas that is toxic to all tissues.

Initial symptoms with low concentrations are eye and throat irritation. But if concentrations are high and people are nearby, hydrochloric acid causes respiratory distress, fluid build-up in the lungs, and, if not remedied, can lead to death.

It is another important gas that will have to be taken into account starting last night. Because it is a molecule that has a great capacity to penetrate tissues and is very corrosive.

In addition, special care must be taken, because although the smell of hydrofluoric acid is usually strong, it can reach toxic concentrations in the lungs without us being aware of it.

In addition, it is likely that we do not feel irritation at the moment, because sometimes this acid reacts with the nervous system causing the pain not to appear until hours later.

At low concentrations and for a short time, the greatest health effects from breathing hydrofluoric acid are irritation of the throat, bronchial tubes, and lungs.

But if we stay longer or what we breathe has a higher concentration, the airways are obstructed, difficulty in breathing appears and, in severe cases, the lungs fill with fluid. In more serious cases it can lead to death.

Tiny crystals that can stick into the lungs

There is another danger in the cloud that occurs when lava and the sea come into contact. At that moment the lava crystallizes at high speed and the threat appears that it could create tiny crystals that float in the air.

If this occurs, people who are nearby could end up breathing these crystals, reaching the lungs and causing injuries of different severity.

The dangers of the collapse of the «delta»

Another of the great dangers that may appear in the coming days is the collapse of the «delta».

The delta is the “new” land that is created as lava enters the sea.

But this lava flow may not create an adequate foundation, and there is a danger that it could collapse. And if that happens, it will cause huge volumes of lava to come into contact with the water in an instant. What would cause the creation of a large acid cloud very quickly, which could also cause explosions.

The collapse of a “delta” can also cause large waves at very high temperatures. Lava impacts directly and moves a large amount of water, while heating it, with the damage that both the wave and its temperature could cause.