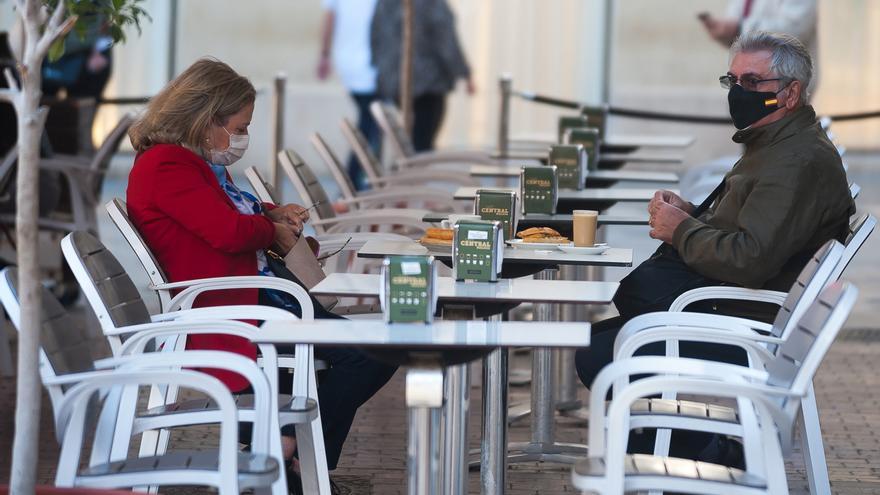 In the midst of a debate about the ‘flu’ of the pandemic, with some autonomous communities timidly throwing hopeful data indicating a decrease in the number of positives for coronavirus, the use of the mask outdoors is once again on the table. Until when will the Government maintain the obligation to wear protection outdoors? For now, the Ministry of Health has progressed to be maintained the time that is essential as long as the impact of the sixth wave does not subside. The experts consulted by El Periódico de España They consider that, for the time being, still needed.

Right now, in “a record wave of infections”, It is when you have to keep the use of the mask and the distances as long as possible. This is what the epidemiologist says Manuel Franco, spokesperson for the Spanish Society of Public Health and Health Administration (SESPAS) to this journal. Franco was one of the experts who, at the time, when before Christmas the Government announced a series of measures to stop the sixth wave -among which the return to the use of this outdoor protection measure was contemplated-, considered that , of all those adopted, this was one of the least effective, given that the majority of infections are produced indoors.

How long will we have to continue? with outdoor use? The experts consulted by this newspaper do not dare to make a forecast. The Executive, focused on starting to prepare the management of the pandemic as a endemic disease -although according to the President of the Government, Pedro Sánchez, it is something that is not going to happen “from one day to the next” and it will be done “with all scientific rigor” and in cooperation with the European Union – has made it clear that, at least for the moment, it will be time to continue wearing it when we go out on the street.

“As long as it takes”

After the last meeting of the Interterritorial Health Council Between the Ministry of Health and the autonomous communities last Wednesday, Minister Carolina Darias assured that the Government will maintain its use outdoors for as long as it is essential and necessary during this sixth wave given the high contagiousness of the omicron variant. Consulted by this newspaper, from his department they indicate that at the moment “no news” about.

According to the latest data from the National Network of Epidemiological surveillance (RENAVE) included by the Carlos III National Health Institute (ISCIII), in its latest weekly report on the situation of the pandemic in Spain, corresponding to January 12, the omicron variant has quintupled the number of reinfections in just a month and a half notified in Spain: of the 64,937 that have been reported to date, almost 52,000, 80%, have occurred since the end of last November, when it was detected the first case of this variant our country.

It must be remembered that the measure of using the mask outdoors again, one of those announced on the eve of Christmas by the Government to stop the expansion of the sixth wave in Spain, then caused enormous controversy. On December 23, the Council of Ministers approved a decree law that established this obligation, which had ceased to be such more than half a year agoregardless of the safety distance. With two exceptions: in individual sports practice and in natural environments, if that distance of 1.5 meters can be maintained with non-cohabitants. The experts consulted by this newspaper recognized in those days that the measure was not the most effective and that its use was recommended in cases of crowds, which was where it was most effective.

Also Read  I can't commit to anything, I don't feel like living | Relations

In France, the Paris Police Prefecture has restored the obligation to wear a mask on the street but limited to places in the city with a high density of people

In France, this same Monday, the Paris Police Prefecture restored the obligation to wear a mask on the street, four days after being laid down by the Justice, but now limited to places in the city with a high density of people in which the safety distance cannot be maintained.

The concept of ‘flu’

In any case, to the epidemiologist Manuel Franco There is another aspect that worries him more than the repeal of that measure and that is the strategy of the so-called ‘flu’ of the coronavirus. “It’s a misused term”, he assures. What the Government is referring to, he adds, “is how surveillance is done, monitoring of cases and how all this is interpreted and measured. That is a bad concept because it is assumed that this is milder and That is not so clear because of the consequences of numbers and because we really don’t know. What we do know is that we are all vaccinated and that this has made the consequences of the wave milder”.

“The mask outdoors makes little sense, it did and it will. But the measure that does not change the current situation much,” says Joan Carles March

In the same sense, the professor of the Andalusian School of Public Health, Joan Carlos March. “The outdoor mask makes little sense, it did and it will. Anyway, I think it was done in an environment like Christmas where it was expected that there would be a lot of crowds. But it doesn’t change much from the current situation. In a way it was a measure aesthetic that put on the table the situation of existing concern and the need to be more careful in a situation that was very active,” tells El Periódico de España.

Joan Carles March It is not clear what provisions the Government has regarding the repeal of the norm, but it considers that “it is evident that once it is established for a more circumstantial issue than anything else” it will be necessary to look for a new situation that favors that its use is no longer mandatory. . Will it depend on the evolution of the sixth wave?. The expert considers that it is one of the aspects that, logically, will influence when dispensing with that obligation outdoors, but not the only one. “It is a measure that does not have scientific evidence, so it is difficult to know if it is going to be removed. for some reason“, he concludes.