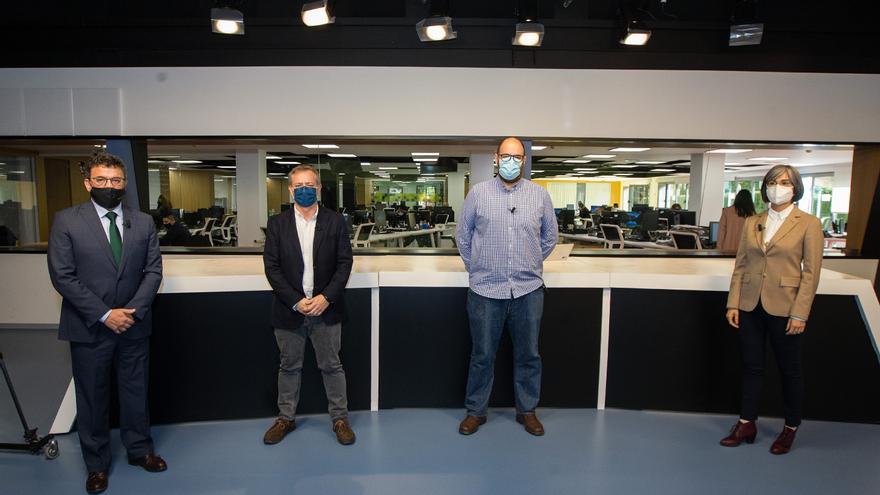 Fake news refers to that set of content that causes a dangerous circle of misinformation. Popularized today as «Fake News», misleading news, hoaxes or half truths have always existed and society has lived with them.

However, the arrival of the Internet and the emergence of new communication and information technologies have made this type of misinformation is spread without limits ranging from the most local to the international level. The result: misleading content can manipulate what people think and influence the way they act, even leading to health problems when it comes to hoaxes related to health.

On how to fight against this misinformation and on how technology can help in this titanic work, the newspaper INFORMACIÓN and the Digital Intelligence Center (CENID) have organized the meeting entitled “Fact checking: tools to combat fake news” with the participation of Carlos Hernández-Echevarría, Public Policy & Institutional Development Coordinator of Maldita.es; Cande Sánchez Olmos, researcher in the area of ​​Communication and Social Psychology at CENID; and Patricio Martínez Barco, head of the CENID Fake News working group.

The first to speak was the representative of Maldita.es, independent, non-profit media outlet to fight misinformation, explaining that the work they carry out consists of “monitoring public discourse, verifying it and fighting misinformation through media literacy, taking advantage of technological tools.” Likewise, he emphasized that the ultimate goal is to achieve “that society is less credulous and that it is able to read information and be able to detect what ‘smells strange’ and may be false news.”

“Disinformation has always existed, but there are things that have changed. We live in a time of widespread loss of credibility: from the media, in particular, but also from science, politicians, the discourse of prestigious people … There has been a democratization of information but also a democratization of disinformation and there are people with no preparation whatsoever who have large audiences that take advantage of the new consumption patterns, “said Carlos Hernández-Echevarría.

Changes in consumer habits that have eliminated some filters that, in the opinion of the expert, warned the reader years ago that they could be facing false news. “We have lost what we call the anchor because before the reader had a format and a design that contextualized the information. Now we don’t have it and the websites are all very similar and there are no differences. The format does not warn us that we are facing a possible deception. The same happens with other channels and formats such as a screenshot, a video or an audio that comes to us via WhatsApp, … The anchor has disappeared at a time when many people think that the content they receive by These channels are as reliable as those of the press, “he lamented.

A moment of the meeting on «Fake News».

How to verify the information

Faced with such magnitude of information and news channels, How can the information be verified? To carry out this process, Carlos Hernández-Echevarría explained Maldita.es’s working method.

Thus, he pointed out that their user community, more than 40,000 registered, which helps them to detect, deny and disseminate information. And he revealed that to investigate information they look at if it is viral, it is dangerous and if it is verifiable.

“A large part of our work is lifelong journalism even though we use technological tools. And the final decision is always made when four of the eight editors decide that the story can be published. Also, if only one of the editors doubts about one of the sources it is not published. We are guarantors because our main value is credibility, “he explained.

In the work of detecting hoaxes and false newss, technology plays a very important role in the initial phase, since they have a system of Artificial Intelligence that allows you to study in an automated way the thousands of messages that come to you through a chatbot and respond to users who raise their questions. Likewise, technological tools also allow them to analyze huge databases that, if done manually, would require an enorm spending hours at a time when journalism has fewer resources. ‘Technology is very important. It frees us of time, but it can never replace the work of a journalist or the good judgment of a conscientious user.

Cande Sánchez Olmos, researcher in the area of ​​Communication and Social Psychology of the CENID project, agreed with her table companion on this point by stating that one of the most important conclusions they have reached in the study carried out in Alicante is that «when we have technological tools we can have more impact information and in more detailHow are the days when the hoaxes have been active, something that doing it manually would cost a lot. For this reason, he considered that “you have to work the hoaxes both manually and computerized. Technology must serve to assist professionals and achieve more complete results.

Also related to the use of technology and the importance of detecting «Fake News», Patricio Martínez explained that the objective of CENID is «create a platform that brings together all the technological tools that allow working in the monitoring phases, but also in the verification phase, in the generation of denial and in its adequate dissemination ”. At present, the project is focused on the province of Alicante and public administrations, although it was foreseen that it could be extended to the rest of the municipalities, provinces and regions of Spain, since local hoaxes are a danger and do not usually reach national media other than disprove.

«We have developed a series of recommendations, protocols and requirements, both technological and human, after studying 20 municipalities so that anyone can deal with this misinformation in a local environment. Now we are going to start implementing Artificial Intelligence to assist a municipality and draw conclusions about the tools implemented. Our goal is to take it to other municipalitiesIt may even become an ecosystem that can benefit companies, said the head of CENID’s “Fake News” working group.

A moment of the meeting on «Fake News».

Like the other two participants in the day, he stressed the importance of technology, especially in the initial part. «We have data that tell us that the ‘machine’ is capable of detecting, in up to 80% of cases, if a news item can be false or misleading because of the way it is expressed, without entering the content, “he praised, while stressing that the final decision always has to be made by a human” because artificial intelligence, like human , goes as far as it goes. The one who has to take the risk is the person who has the responsibility and never the machine.

The CENID digital meetings, an initiative of the Alicante Provincial Council, the University of Alicante (UA) and the Miguel Hernández University (UMH), are a point of debate and reflection to transmit to society the experiences and possibilities offered by technology and digital transformation without technicalities.

Hoaxes at the local level

Cande Sánchez Olmos, a researcher in the area of ​​communication and social psychology of the CENID project, distinguished between errors that can occur in journalism and misleading information issued intentionally. And, on this point, he pointed out that «of the 20 hoaxes studied, there are 18 that have been created with the will to deceive and that affect a local area, which can be just as damaging as a national or international one ”.

«The local hoax has the same characteristics as the national hoax, so we must pay the same attention because the danger and damage can be replicated at great speed. We have seen cases in which a false news that appears in the north of Spain is later replicated in the south“, He detailed, while emphasizing that the local” Fake News “” are not absurd or fanciful information, but rather consistent, which can be confused and created with the will to deceive. ”

In addition, he stressed the danger that it can pose to health according to the theme of the hoax and recalled that “most of the cases we have studied have had to do with Covid-19 or collateral issues of the pandemic.” Regarding the denials, the researcher argued that “fundamentally they are the own affected sources who deny them and that the local media assist the injured by giving a voice. However, he acknowledged that not all denials reach the “fact checkers” and there is much to deny. “In the same way that the local press is widespread in Spain, the verification of news is not so widespread at the local level, so much work is required in the phase of creating work and verification protocols.”

The representative of Maldita.es showed a similar opinion when speaking about the local situation and about journalism, indicating that, in addition, the closest area has a series of advantages, such as he public is close and, therefore, has a better chance of denying information “Just go down to the street and take a picture.” “There are possibilities for verification and journalism of very important data in the local press and it is a necessity as a public service,” he said, while acknowledging the limitations that exist for a local company to do this work and be viable.