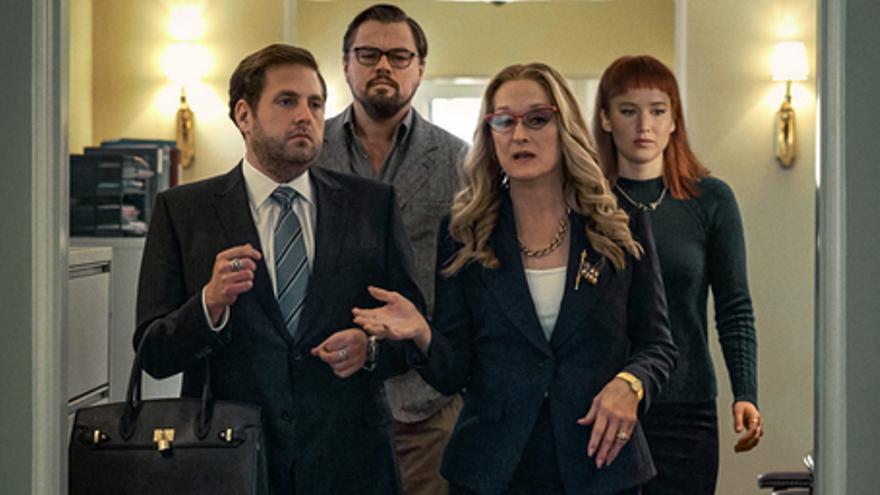 The movie “Don’t look up” (Don´t look up), reminded me of the scene in which Galileo wanted Pope Paul V to look at his telescope to observe how the planet Jupiter had satellites like Earth and that they both moved around of the sun, the Pope refusing to look at the sky through the telescope -I don’t have to look at that device, I see the Bible and it says that it was the sun that stopped and not the earth. -And yet it moves, Holy Father, murmured the sage.

Some scientists discover a giant meteorite that is going to collide with the earth, and they contact the White House to try to avoid it, and there begins the criticism of the political class and the media: the President has a serious scandal problem sexual; her son, who is her advisor, continually tells her mother President; the general chief of staff charges the scientists some hors d’oeuvres that were free for the guests; and in the end who decides is a billionaire interested in space flights and who is going to build some devices that are going to destroy the meteorite. Scientists go to the media and it is even worse, the live camera interviewer reaches out to a scientist because she says that he is very good, an honest scientist is corrupted through power and sex, and who finally makes up his mind all is for greed.

The director and the scriptwriters decided to apply irony and humor, because if done seriously it could not be commercial and even have censorship problems. The right rejects that humor since it discredits its institutions and attacks its privileges, a certain sector of the left has criticized the film because with humor, it makes capitalism assume that censorship as something marginal and turns it into an object of commerce and profit. But it is not true, humor is a superior state of social conscience that no dictator consents.

Erasmus, in his work “In Praise of Madness”, by means of irony and satire, fiercely criticizes the stupidity of the church, the nobility and some so-called connoisseurs; This work had a lot of influence on several writers, including Cervantes since his character Don Quixote de la Mancha is a madman who fought against an unjust society, and without using that humor it would have been difficult to pass the censorship of his time, because precisely it constitutes a symbol of the ideal fight against the powerful and in favor of widows, minors and convicts. “The Name of the Rose” by Umberto Eco, shows how in a convent a cursed book can become, using humor and satire, a fierce criticism of religion and its institutions.

Social criticism through satire and humor can only be allowed in a democratic society, since every dictator is left or right censors and punishes the humorist. The Catholic Church through the forbidden books and the inquisition, the fascisms with the burning of left-wing books, and the totalitarian countries with the censorship and purification and punishment of their authors. I remember that at the end of the Franco regime the humorist Miranda drew a joke in a magazine in which the figure of justice was seen, who tipped the scales and lowered the sword when lifting the blindfold to look at a necklace that offered him a corrupt . He was convicted of contempt for authority since the drawing, although it did not express who that justice was, was understood to be Spanish justice. When the general amnesty arrived in the Transition, the comedian requested that the amnesty be applied to him, and it was denied on the grounds that the judicial authority was not a politically motivated crime. That is to say, pardoning those who had murdered such as the Francoists and ETA members were susceptible to forgiveness, but those who had mocked the judges themselves that did not admit forgiveness.