12.20The Celaá Law is against the majority of the educational community. Among them are the parents ‘associations (Concapa and Cofapa) and the employers’ association for concerted education (grouped in CECE and Catholic Schools) and in which more than two million students study. Special education, which serves 37,500 children and adolescents in our country, has also rebelled against Lomloe. The unions FEUSO and FSIE also do not support the new education law, the eighth of democracy. They are joined by a score of associations linked to the education sector such as Free to educate our children, With the libertad.es, Confederation of Educational Centers (Concee), Yolibre.org, Fundación de Escuela Cristiana de Catalunya, Initiative for freedom of education. The list is long.
12.19The PSOE launches a campaign against the “lies” against the Celáa lawIn the midst of protests against the Celaá law, the PSOE launched a campaign on social networks this Sunday to dismantle the “lies” that circulate about the new Education law. From the official profile of the PSOE, the “truths” of the so-called ‘Celaá law’ are counted against those who claim that “it ends with Spanish at school”, “that it is an attack on concerted education” or that “the new law indoctrinates ”. “Don’t believe it,” they say from the PSOE because, according to their exposition, the law “does not eliminate religious teaching and ‘indoctrinate’ young people with the subject of civic and ethical values”; “Religion will remain an option” and “students will not have to choose between the other.”12.14The protests against the Celaá law are taking place this Sunday in 30 provinces and 50 Spanish cities, with a large influx. See here the images of the protests against the Celaá law

12.10More than two thousand vehicles travel through Logroño against the educational reformMore than two thousand vehicles, according to the organization, have left this Sunday in a demonstration through the streets of Logroño in a protest for the Government’s educational reform – the Lombloe or Celaá law – approved last Thursday in Congress.12.08“There will be more mobilizations”As “Más Plurales” told ABC Sevilla, the platform plans to continue with its protests to reject the rule because, as they recall, the process has not finished yet. It remains for the rule to go through the Senate and return to Congress. The spokesman for “More Plurals”, Jesús Muñoz de Priego, insisted that the norm has come out of a Congress “clearly divided” and that it is a “partisan” law “approved by a single vote.”12.03“I can’t think of a better plan than to be here for something so important to our children”This teacher in a private school and mother of two children who study in a private school says that “I can’t think of a better plan for this Sunday than to be here protesting something so important for our children as the education they receive.” According to the organizers of the event, the thousand flags they had prepared are all distributed. Now they distribute balloons to try “to see everything possible”. Informa Nieves Mira 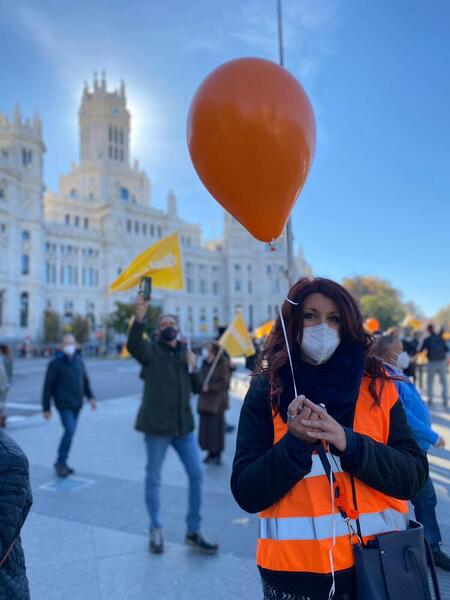 11.59
These are the most controversial points of the Celaá Law, according to the More Plural Platform, which convened the demonstration: It allows students to be distributed by centers, significantly reducing their parents’ educational choice. A right to public education is “invented” -when the right recognized in the Constitution is the right to education-; It confronts it with the concerted education model, widely implanted in Europe, breaking the complementarity of networks established in the Constitution; it devalues ​​the teaching of the subject of Religion at school by applying improper secularism and calls into question the survival of special education centers, among other aspects.11.52Catholic Schools demands that the ‘Celaá law’ recognize the “social service” of the concerted networkThe general secretary of Catholic Schools, Pedro Huerta, claimed this Sunday from Cibeles that Lomloe recognize the “social service” of concerted education. He also asked the PSOE to fulfill its electoral promise and promote an educational pact with consensus and not fall into “partisan deliveries” to its government partners. Huerta, claimed “the right to education” and “that it be recognized” the social contribution made by the concerted network, in which Catholic Schools participates, to “quality teaching.”

11.46Pablo Casado, Isabel Díaz Ayuso and José Luis Martínez Almeida participate in the demonstration, aboard the same vehicle that the PP leader drivesThe leader of the PP, Pablo Casado, assured this Sunday in the demonstration against Celaá Law that his party will limit the harmful effects of the Lomloe in those autonomous communities in which it governs, that once it is approved, he will denounce it before the Constitutional Court and that “it will be in force “the time that the PP takes to reach the Government. “The first thing we are going to do is repeal it,” said Casado.

11.42“We don’t want dictators, we want freedom,” can be heard from the megaphone of a car. 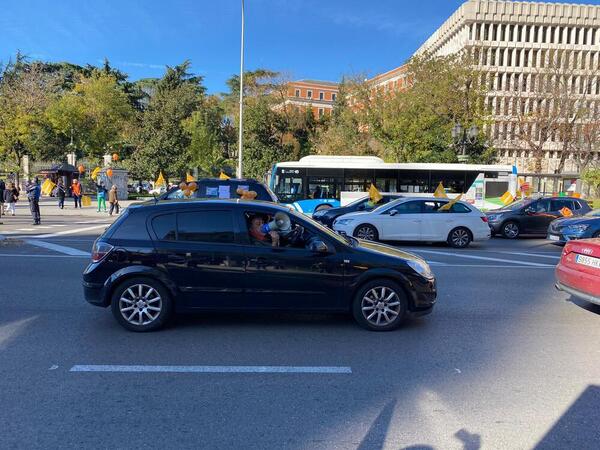 11.39Protest in SevilleFrom 11 am this Sunday hundreds of cars take part in the demonstration through the streets of Seville. The itinerary, which began at the Benito Villamarín Stadium (ten minutes late due to the large number of people attending the protest), runs along Avenida de la Palmera, Paseo de las Delicias, Paseo de Cristóbal Colón, Arjona, Torneo, plaza Cayetana de Alba, Resolana, Parliament of Andalusia, to finish San Juan de Ribera (confluence of Dr. Marañón and Dr. Castaño). As the “More Plurals” platform announced to ABC, they plan to continue with their protests to reject the rule because, as they recall, the process has not finished yet. Pedro Ybarra reports.11.31Protest in Madrid: “They accused us of being sectarian and we are showing them that they are not right”Freedom is the word that the parents who have come to the center of Madrid this Sunday repeat the most to be heard. Their children study in subsidized or special education centers, and their main concern is that they may disappear. “Thousands of cars showing that the Government does not have the support of the street, families that could be enjoying their Sunday and have come here to make themselves heard. And just like here, in 50 other Spanish cities ”says Antonio Amate, head of the Más Plurales platform. “They accused us of being sectarian and we are showing them that they are not right,” he adds. Informa Nieves Mira11.22More and more cars arrive in the center of Madrid to protest against the Celaá law. In some sections the circulation is already complicated, the horns sound and the orange flags abound that read “Stop Celaá law.” Nieves Miras reports 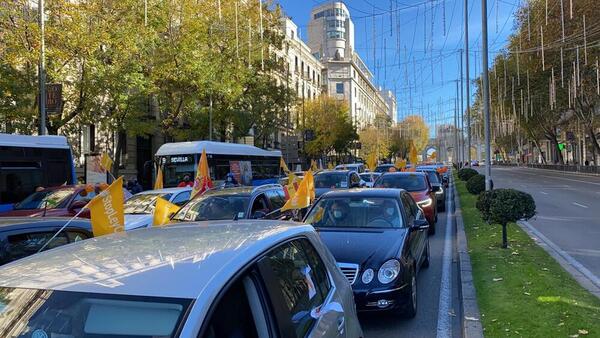 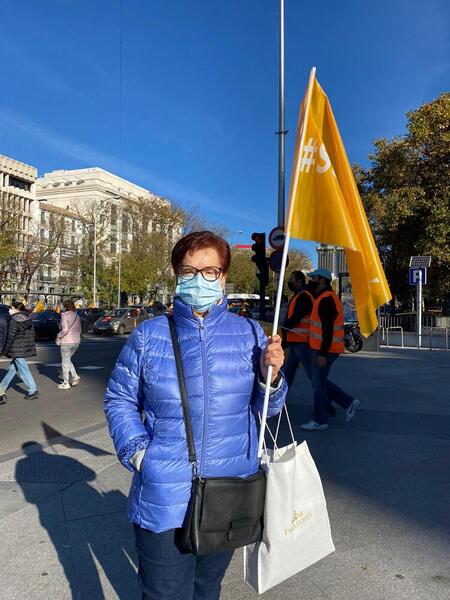 11.18More than a million and a half signatures against the “Celaá law”So far, the More Plural platform has obtained 1,566,721 signatures to request “the protection and continuity of the plurality of our current educational system”

11.12The concentration is also called in Seville.

11.06More Plurals will denounce that the new law is “strongly interventionist”The More Plural Platform, which brings together parents, teachers, unions and the employers of the concerted school, denounces in its manifesto that the reform of the Organic Law of Education (LOMLOE) is “strongly interventionist, it promotes the restriction of citizen rights and freedoms and it goes against the plurality of our educational system, which is key in a democratic society. “10.57Hundreds of cars already collapse in the center of MadridThe caravan was not made to wait and before 11 o’clock, as planned, the streets of the center of Madrid were filled with cars and horns. It is the response of hundreds of families against the next education law. Informa Nieves Mira 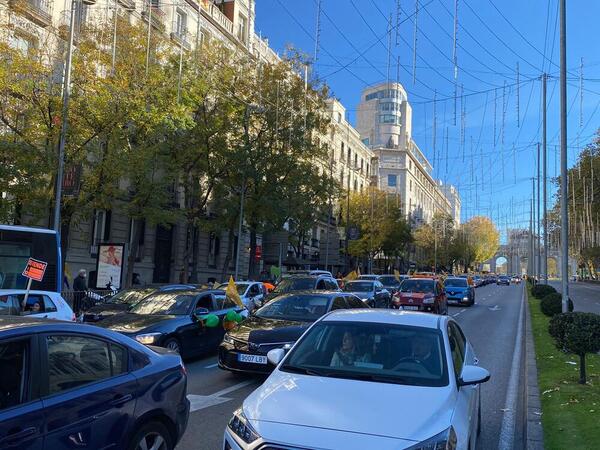 Everything prepared in Cibeles for the reading of the manifesto10.45Pablo Casado will participate in the mobilization against the ‘Celaá law’The president of the PP, Pablo Casado, participates this Sunday in the mobilization against the ‘Celáa law’ with the president of the Community of Madrid, Isabel Díaz Ayuso, and the mayor and spokesperson of the party at the national level, José Luis Martínez Almeida.
In a statement, the PP announced that it planned to continue showing its disagreement with the ‘Celaá law’ by attending today the protests called by the More Plural platform, in support of concerted education, special education and against the elimination of Spanish as a vehicular language. 10.44Madrid tourIn Madrid, the demonstration, which will take place between 11 a.m. and 1 p.m., will take place along Paseo de la Castellana, on a circuit between Plaza de Cibeles and the Cuzco roundabout. At 12:30 p.m. a manifesto will be read

10.39Demonstrations in more than 30 provinces against the “Celaá law”The More Plural Platform, which brings together associations of parents of students, unions, companies and different groups from the concerted education sector, is concentrated this Sunday in more than 30 provinces to show its rejection of the Lomloe, the reform of the educational law known as ‘Celaá law’. Under the slogan ‘For the right to choose the education we want’, the organizers have called for mobilization with vehicles, from 11am to 1pm.