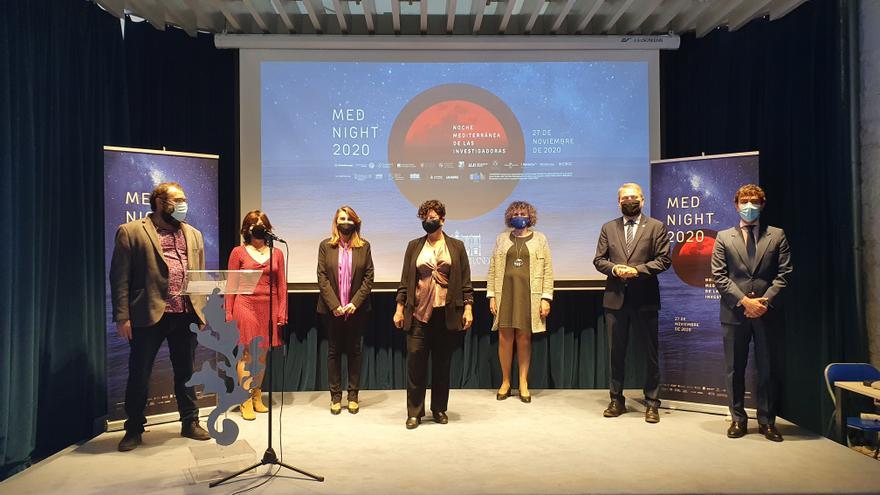 Within the framework of Casa Mediterráneo, the Mednight 2020 or “Mediterranean Night of Researchers” was presented, a European event to bring Science closer to society, which on this occasion focuses on making the figure of women in research visible, through of hundreds of virtual activities throughout the next week and planned by the universities and research centers of the Community and Murcia.

The regional secretary for Research and Universities of the Department of Universities and Science, Carmen Beviá, participated in the opening ceremony, highlighting the role of science in the face of the challenges posed by the pandemic and that in the Mediterranean there is an “excellent system of science that is our duty to power, contributing to the construction of an internationally competitive research system “.

He also highlighted that the Generalitat “has made a significant commitment to science with an increase in investment by 65” and has especially valued the visibility that this activity gives to female researchers.

Beviá recalled that women only represent 35% of students enrolled in STEM careers (science, technology, engineering and mathematics) and that with digitization it is estimated that 50% of new professions in 2025 will belong to professional opportunities in these careers, so that “women cannot be left behind and have to contribute to leading this change.”

The rector of the Miguel Hernández University, representing the universities of the Community as president of the Conference of Rectors of the Valencian Public Universities (CRUPV), Juan José Ruiz Martínez, has indicated for his part that science and technology are ” pillars of global development to overcome the great challenges we face “.

He also highlighted the importance of collaboration between universities and research centers to promote dissemination and scientific culture “as fundamental and cross-cutting aspects of research, teaching and knowledge transfer.”

The vice-rector for Research and Knowledge Transfer of the University of Alicante, Rafael Muñoz, attended the event but had to be absent, according to the rector of Elche in his speech.

In turn, the rector of the Polytechnic University of Cartagena, Beatriz Miguel Hernández, has influenced the data of women in STEM teachings and has drawn attention to the concern of gender disparity, since the careers related to these teachings constitute “The jobs of the future, the driving force for innovation, inclusive growth and sustainable development.”

In her speech, she encouraged them to continue working to promote women to positions of responsibility in universities and research centers.

The general director of Scientific Research and Innovation of the Region of Murcia, María Isabel Fortea Gorbe, has also attended, who stated that “Murcia occupies a privileged position in terms of scientific dissemination and citizen participation in science, thanks to the high number of associations of popularizers and researchers from all institutions increasingly aware of the need to transfer scientific knowledge to society “.

The acting director general of Casa Mediterráneo, Héctor Salvador, has reviewed some of the actions that the institution develops in the Euro-Mediterranean area to promote scientific and technological innovation and bring science closer to society.

And the coordinator of Mednight 2020, Ricardo Domínguez, has highlighted the high level and quality of the activities of both autonomies to publicize “the excellent scientific production of the Mediterranean arc”.

On the website of “The Mediterranean Night of the Researchers” you can consult all the proposed activities and participate from Monday through your web portal .

It is associated with the “European Night of Researchers” initiative of the European Union, funded by the Marie Sktodowska-Curie actions.

After the opening ceremony, Javier Ordóñez, Professor of Logic and Philosophy of Science at the Autonomous University of Madrid, gave the lecture “Herederas de Hipatia”, and made a historical tour of the great Mediterranean researchers who spread the thought scientist for the Mediterranean, such as Rita Levi-Montalcini, neurologist and senator from Italy, Nobel Prize in medicine and as Hypatia, a reference for science and for women who survives more than 1600 years after being murdered.

The editor-in-chief of QUO magazine and author of the Homínidas blog, Lorena Sánchez, has influenced her talk on “Las Evas del Mediterráneo”, on the intervention of women in science until now.

The researcher in prehistory at the University of Alicante, María Pastor Quiles, has also addressed in “Invisible women? Gender stereotypes and Prehistory” the influence on gender inequality of the image traditionally transmitted about women and men in prehistory.

Finally, a video on the women of Atapuerca has been screened by Rebeca García González, Paleontology professor at the University of Burgos, and the archaeologist and head of Prehistory and Archeology at the University of Granada, Margarita Sánchez Romero, spoke about “The footprint of a woman discovered in the cave paintings of the Mediterranean arch”, detailed her participation in the research that contributed to give a scientific answer to the authorship of the cave paintings.