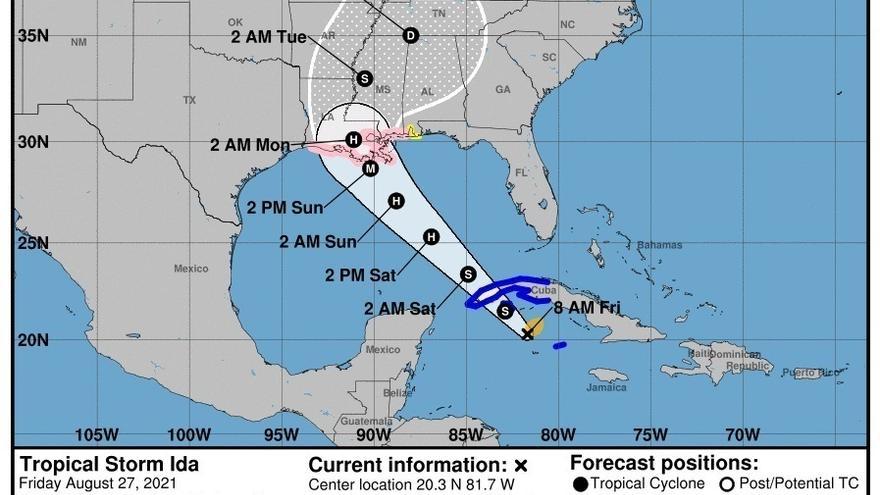 Hurricane Ida He made landfall this Friday for the second time in Cuba, in Pinar del Río, after doing so this morning on the Isle of Youth, and is leaving floods and heavy rains on the island as it advances into the waters of the Gulf of Mexico, where it is expected to rapidly transform into a dangerous major category hurricane.

The greatest danger will begin over Gulf waters, when Ida strengthens very quickly and becomes “an extremely dangerous major category hurricane” as it approaches the northern Gulf Coast, according to the National Hurricane Center (NHC) forecast. ).

If the prognosis is correct, Ida to hit 16 years after Hurricane Katrina landed as a Category 3 cyclone with winds of 125 mph (201 kph) near New Orleans, cities that are among the places most likely to be hit by hurricane-force winds from Ida. New Orleans is under a hurricane alert and an emergency declaration has been issued for the state of Louisiana, given the danger that Ida will hit those coasts as a major category hurricane, perhaps 3 or 4, which can cause devastating damage.

The NHC, based in Miami, issued hurricane warnings in the last hours on the coast of the US Gulf of Mexico from the Intracoastal community (Louisiana) to the border of Mississippi and Alabama, as well as the Pontchartrain and Maurepas lakes and the area New Orleans metropolitan area. Experts warned of the risk of flooding from storm surge of up to 11 feet (3 meters) in areas of Louisiana and Mississippi, and warned of possible “devastating damage” by the force of the wind in the region, including New Orleans. In addition, they anticipate, Ida is likely to produce heavy rains between Sunday and Monday on the central Gulf Coast from southeastern Louisiana to Alabama, as well as the Lower Mississippi Valley, with possible floods.

New Orleans Mayor LaToya Cantrell today called for the evacuation of all people living outside the levee system that protects the area from flooding. Cantrell did not specify how many people live there, but urged residents with medical conditions and other special needs to leave their homes early. “The time is now,” the New Orleans councilor said.

NHC meteorologists predict Ida to become a “extremely dangerous major hurricane “once it passes this weekend in the waters of the southeast and central Gulf of Mexico and as it approaches the northern Gulf coast on Sunday. NHC projections indicate that Ida” will make landfall on the coast. US north of the Gulf of Mexico on Sunday, “probably off the coast of the state of Louisiana.