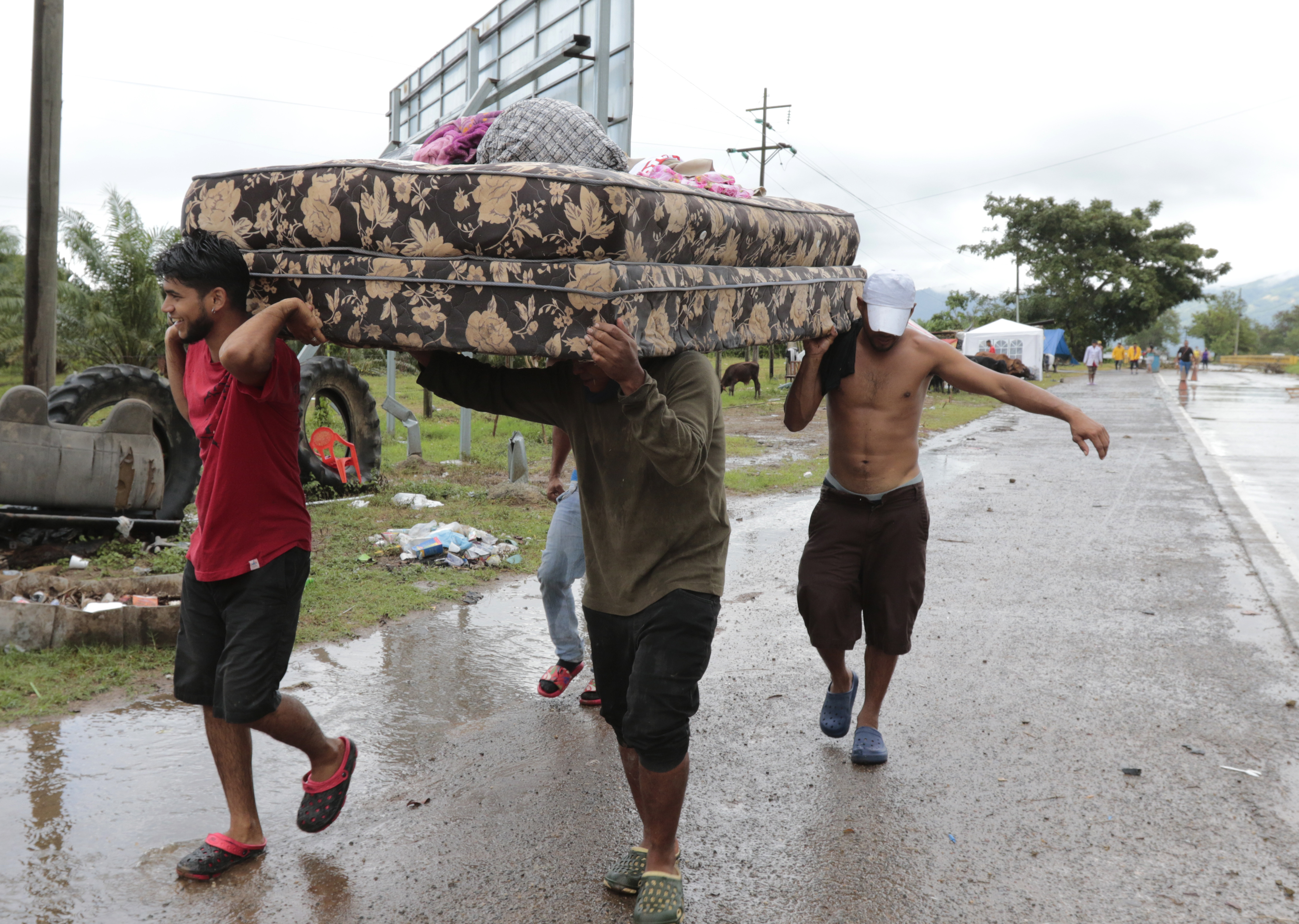 Hurricane Iota, classified as “catastrophic” and “extremely dangerous”, made landfall on Monday night on the northeast coast of Nicaragua, near the city of Haulover, about 45 kilometers south of Puerto Cabezas, with sustained winds. 250 kilometers per hour, reported by the United States National Hurricane Center (NHC). The fury of the cyclone has caused flooding, collapsed power lines and destroyed thousands of homes. After making landfall, it has lost strength to become a Category 1 hurricane with sustained winds of 135 kilometers per hour and now threatens Honduras, where the main concern is the amount of rain it may leave in areas that have already suffered floods and landslides. with Hurricane Eta, a powerful cyclone that 10 days ago left 261 dead in Central America.

The first rains and gusts of Iota began to hit the Caribbean coast of Nicaragua on Monday morning, especially the city of Bilwi, where Eta caused heavy damage and where scenes of fear and frenzy were experienced on Monday: the inhabitants drew from the houses the belongings, while the authorities evacuated the most vulnerable areas. As the hours passed, the effects of the cyclone intensified in the form of rainfall and strong winds. According to the National System for the Prevention, Mitigation and Attention of Disasters (Sinapred), Iota is the strongest hurricane that has impacted Nicaragua since there are records.

In the Nicaraguan Caribbean, a very poor and isolated area, the feeling is that the elements do not give up. The community members of Wawa Bar, a small town wiped off the map by Eta, began to rebuild on the ravages. But since the weekend they began to be evacuated due to the threat of the new hurricane. In some areas of Nicaragua, the red alert is still on from the Eta pass. As reported by Guillermo González, director of Sinapred, as of Monday there were 20,000 evacuees and the country was in a position to set up about 1,300 shelters. But the residents who were already occupying those shelters have criticized the Government for the shortages and lack of food in those centers.

Iota is also expected to cause potentially deadly torrential rains and flash floods in Central America this Tuesday, according to the NHC. The agency warned that the risk of floods and landslides in some of these places may be accentuated by the effects of Hurricane Eta, which hit Honduras, Guatemala and Nicaragua with special force, which can generate “significant catastrophic effects.”

In Honduras, the 18 departments of the country are on red alert and in 10 of them on Monday evacuations were carried out as a preventive in areas near rivers and streams at risk of flooding. In the Sula Valley, some people trying to recover belongings from the ruins of Eta have been forced to evict what was left of their homes again. The authorities issued a hurricane warning from Cabo Gracias a Dios to Barra Patuca and set up 300 temporary shelters so that people can take shelter.

In Guatemala, authorities began evacuations on Monday morning in the department of Izabal, one of the most affected by Eta and which is now on the road to Iota, according to the National Coordinator for Disaster Reduction (Conred). In addition to the more than 260 dead and dozens of disappeared throughout Central America, Eta left hundreds of thousands of displaced people, towns in Guatemala declared as “holy fields” due to the impossibility of carrying out rescue work and 20% of the population from Honduras with nothing to put in their mouths or a roof to protect themselves from the arrival of more water, according to the International Red Cross. Eta hit the Caribbean coast of Central America hard two weeks ago as a category 4 hurricane. It was later downgraded to a tropical storm, but strong wind and falling water for several days in a row caused flooding and landslides.

Iota is the 13th hurricane this season in the Atlantic, which is being unusually active and the first to reach Category 5 this year. In its advance through the Caribbean, the cyclone has left devastation in Cartagena de Indias and in the archipelago of San Andrés y Providencia, near the coast of Central America. The walled city of colonial architecture in the Colombian Caribbean is submerged under the waters after the passage of the storm. Its intense rains have left this weekend, a festive bridge in Colombia, more than 150,000 victims and 33 neighborhoods flooded in the tourist port, where local authorities have declared public calamity.

Up to 70% of Cartagena was flooded this weekend, according to Mayor William Dau. The images of streets turned into streams are repeated from the peripheral neighborhoods, the hardest hit, to the famous historic center of colonial balconies in a city that depends on tourism and has not yet recovered from the economic and health impact of the coronavirus pandemic. Hundreds of victims have been transferred to a sports arena set up as a shelter and the national government has confirmed the delivery of 10,000 aid packages that include food and hygiene products.

The rains have wreaked havoc across the country. Although no fatalities have been reported in Cartagena, Colombia has suffered a strong winter wave, aggravated by the Iota pass, which leaves at least seven dead and thousands of victims. The rains have hit the Caribbean departments, as well as Antioquia and Chocó, in the northwest of the country, according to the National Unit for Disaster Risk Management (UNGRD). In the Antioquia town of Dabeiba, five people died from landslides caused by the rains.

In the jungle Chocó, one of the poorest departments in Colombia, on the Pacific, there are more than a dozen municipalities also affected by the inclement rains. There, a person died due to the collapse of a house. Authorities are closely monitoring the situation in the archipelago of San Andrés, Providencia, Santa Catalina and the keys, where swell and hurricane force winds can wreak havoc. The airports in the area are not operating, San Andrés announced a curfew and woke up without electricity service due to the fall of poles, while Providencia was isolated this Monday. In the night, the authorities confirmed that one person died in Providencia and 98% of the island’s infrastructure was destroyed.