Every now and then I remember when Apple made that ad for the iPad asking us what a computer was.

The girl using the iPad was doing tasks not typical of a tablet, but of a laptop and that announcement was ahead of its time because the software was not ready, or not as ready as it is now with iPadOS, but the idea was that, a device that could do everything, being the center of entertainment and information, but also a work environment.

Well something similar is Xbox Series X and Xbox Series S. In fact, I am so convinced that I spent a week working on an Xbox Series S (creating texts) and the truth is that the experience was very, very similar to what I have when I am working on my Mac because of the type of work that do.

We have already analyzed both Xbox Series X and Series S and, in fact, a few weeks ago we went back to the little one in the family to see how it holds up in 2022 and see the keys that have made it so popular in a context of lack of microchip.

And when using it I asked myself… “can it replace a student’s PC or, at least, perform the functions of a PC for someone who has just left home to study and wants to do their school work, but also take a game from time to time?

Maybe you think it’s absurd, why would I want an Xboxwhich costs just 275 euros at the moment, as if it were a PC towerbut I think it makes more sense than you might think for two reasons. 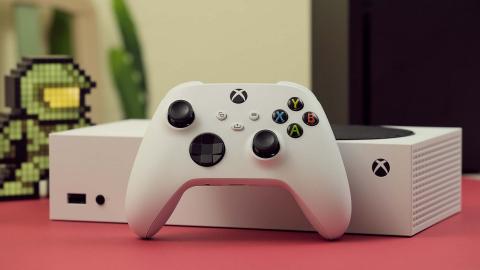 The first is that Xbox Series S has a super compact format and it will allow us to carry it in the suitcase easily, so if you go home for the weekend, you can put it in your backpack. The second is that supports keyboard and mouse and that, together with Edge Chromium, opens up a universe of possibilities.

I used Razer’s Pro Click -review- and Pro Type Ultra -review- for this test and as soon as I plugged them in, the Xbox recognized that I had a keyboard and mouse. In fact, one of them was connected to an external Seagate HDD that we will analyze soon and everything was fine.

The truth is that I was playing Halo Infinite -analysis of my colleagues from HobbyConsolas- without problem with keyboard and mouse on Xbox and the experience was fantastic.

for now it is not very comfortable to use the console exclusively with keyboard and mouse because you can go to the guide with the Windows key, but to scroll you will have to use the arrow keys, the escape to exit and the enter to enter.

The truth is that I would like Microsoft to allow a pointer in the dashboard when it detects that we have a mouse connected, but well, I suppose everything will work and the fact that I am writing these lines right now is proof of this.

Oh well, beyond gaming, what I wanted to check was if I can use my Xbox Series S as if it were a PC for work And yes, as soon as I got into Edge I realized that it is really the same version, or very similar, to the Edge that I work on every day.

Also Read  Farmland eats up more and more of the Earth's surface. This map shows how far

In fact, since my session is the same, that of Microsoft, there are some passwords that did not have to be entered again because the system had them saved. I got into the office suite of both Microsoft and Google and the truth is that without a problem.

I can send emails, write, save and send documents and you will also be able to work in groups with shared documents without any problem. That was the easy part because they are still very universal environments and pages, but the next step was to see if I could do my job on an Xbox Series S.

And the answer is that… not as comfortable as on a PC, but almost. I’ll explain: in one tab I usually have Slack, in another the text editor of the web, which is a proprietary development and sometimes causes problems depending on the browser, and YouTube to listen to something in the background.

Well, to my surprise, the web editor opened without a problem and one of the reviews that week I wrote in full on Xbox Series S. To place the images and text links I had to go to the Mac, since there will surely be a way to upload images from the Xbox that you have previously downloaded in a file manager, but it did not seem comfortable to me.

That the web editor worked was already a surprise and with that, the possibility of having Slack, the Google suite and basically any online work environment, we have an Xbox that can act as a PC.

If after a couple of hours I needed to disconnect I would go to Halo Infinite for a while because thanks to Quick Resume everything is very fast, but what I saw when I returned to Edge is the main problem of this working method: the tabs are reloaded every time you enter.

That is to say: if you are in Slack and go to the Google Documents tab, the documents tab will be reloaded and the Slack tab will go to the background. If you go back to Slack, that tab reloads and… well, you can get the idea: it’s always like that.

I found a couple of tweaks in Edge settings that seemed like they were going to fix the problem, but I didn’t really notice anything different happening. Is it really a problem? Well… not because everything is stored in the cloudbut it is a nuisance that it reloads the page every time you enter.

I don’t like the pointer either because it’s too big and the default interface is also huge. This is logical because it is made, I suppose, with televisions in mind, where the fonts need to be bigger, but hey, you can always adjust the page size.

What I couldn’t adjust is the size of the app window, at least on my 1440p monitor. The games and the dash are shown full screen, but Edge has a black frame that I don’t quite understand why it is.

Xbox Series S is Microsoft’s digital console, an Xbox that shares the catalog and many features of Xbox Series X, but less powerful and focused on services such as Game Pass.

But well, in the end, the main interest of the experiment was to see if a student who leaves home can take an Xbox Series X or Series S as if it were their PC tower gaming that, in addition, he uses for his class work and the truth is that I was surprised.

Leaving aside the hassle of the tab reloading every time you log in, the truth is that the typing workflow didn’t suffer at all and if you polish the details that I didn’t like a bit more, I think Microsoft has an argument of sale that can be very interesting for many users.