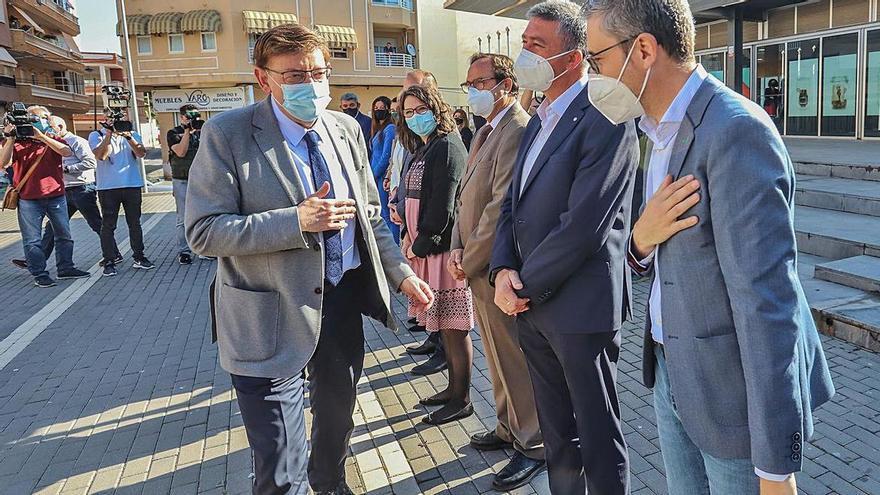 Chance, even if it seems like not, wanted yesterday that the President of the Generalitat, Ximo Puig, flanked by practically all of his government, except Vicent Marzà, will disembark in the south of the south of the Valencian Community while the leader who aspires to stand up to him, the popular Carlos Mazón, who feels especially strong precisely in that territory, the Vega Baja, went to Valencia to present his candidacy to preside over the PPCV. And it was chance that clearly determined the displacement of the first sword of the main parties in the Community in both directions. The conservative accelerated his coming out in the capital of Túria as a result of the fall of Bonig, while the head of the Consell had for days committed his presence, once again, in a territory in which he has intensified his activity as never before have his predecessors in the Palau.

Guardamar del Segura it was specifically the municipality chosen to hold a plenary session of the Botànic Executive. It is the second time in the legislature so far that the left-wing government, which brings together the PSPV, Compromís and Unides Podem, has gone to the region that has been and is a historical fiefdom of the PP to pursue progressive politics. It did so after the DANA crisis of 2019, in a gesture of approaching the affected territory to approve emergency aid. He did it again yesterday to commemorate the 750th anniversary of the granting of the title of royal town to this town, although also on this occasion a relevant agreement was signed to help the sectors affected by another crisis, that of the coronavirus.

A trickle of official cars was crossing the streets of the town that welcomes the mouth of the Segura and, at 9.30 am, those responsible for practically all the ministries awaited the arrival of the president, who arrived last at the place of the convocation and, he was probably also the last to set sail from la Vega. Those responsible for the political direction of the Generalitat took advantage of the visit, how could it be otherwise, to gain visibility in a square, that of the south of the Community, which for years and years has not always felt completely well treated by the Valencia’s nerve center of power. In these, the person in charge of Territorial Policy, Public Works and Mobility, Arcadi Spain, went to San Fulgencio, where the works to improve the road safety of the CV-860 road with a roundabout and a bike lane have been put into service. . The Minister of Agriculture, Rural Development, Climate Emergency and Ecological Transition, Mireia Mollà, participated in the environmental restoration works carried out on 539 hectares of the dunes located between Guardamar and Santa Pola. The head of Universal Health and Public Health, Ana Barceló, visited Benejúzar’s auxiliary office. The Minister of Justice, Interior and Public Administration, Gabriela Bravo, went to the Torrevieja courts; and that of Finance and Economic Model, Vicent Soler, toured different cultural infrastructures of Guardamar accompanied by its mayor, José Luis Sáez. All this while the vice president of the Consell, Mónica Oltra, made her weekly appearance after the plenary session from the Guardamar School of Music.

With the Government that he presides divided by half of Vega Baja, Puig headed to the capital of the region, Orihuela, from where the Vega Renhace Plan is piloted, at least administratively, which seeks to re-boost the territory with an important battery of investments, especially after the floods of a year and a half ago. There he met with mayors, signed a protocol with the Valencian Federation of Municipalities and Provinces and the Segura Hydrographic Confederation and claimed, once again, what at this time has become the great workhorse of a region with an important agricultural weight: maintain the contributions of the Tajo-Segura transfer and guarantee that this fight will continue “until the end.” Exactly the same thing that he assured last week in another visit to Benferri, in another visit to the much disputed Vega Baja.

662 million more for affected sectors, such as textiles and footwear

The Consell yesterday approved the regulatory framework to regulate the granting of 662 million euros to support the business sector and public transport of the Valencian Community affected by the consequences of the coronavirus pandemic. It did so through two decree laws that will allow granting aid to 184 sectors of activity, “which means doubling the initial number of beneficiary sectors that were initially included,” said Mónica Oltra yesterday. Among them, sectors as important for the province of Alicante as textiles or footwear, as well as ceramics or plastic. Of the total, 15 million euros are used to grant subsidies for the public transport sector. The amount will consist of a single contribution of 8,400 euros for each beneficiary and for each vehicle of your company.