Solidarity is and should be one of the foundations to advance in a prosperous and egalitarian society. The incentive that transforms the future.

In this scenario, Fundación MAPFRE sources have pointed out the importance of managing new aid programs creative and effective, since the coronavirus crisis is leaving many families on the poverty line that had never before been forced to go to any type of public social assistance. Without income and with soup kitchens and food banks operating unevenly, they cannot cover their basic needs, solutions and above all solidarity must be part of the way.

Social support institutions, such as Caritas, warn that many families have lost their jobs due to the health crisis, so this year is presented a much harder christmas. This situation worsens if the figures referring to minors are taken into consideration: before the pandemic, more than 2.1 million children were poor in Spain and far from improving, the forecast is that let’s get to 33.3% at the end of this year.

Spain has the third highest child poverty rate in Europe, after Romania and Bulgaria; which means that 1 in 3 children will not have a Christmas dinner. This year, more than ever, this dramatic situation will have to be thoroughly analyzed to provide solutions. At this juncture, social entities have requested help from Fundación MAPFRE through its Sé Solidario project to obtain clothing, food, basic necessities and toys.

The response has been to launch an action to support in this situation of extreme vulnerability, distributing to the most needy families and people in situations of loneliness 7,000 Christmas Cards to acquire food, clothes and toys, thus covering their most urgent needs at this time. 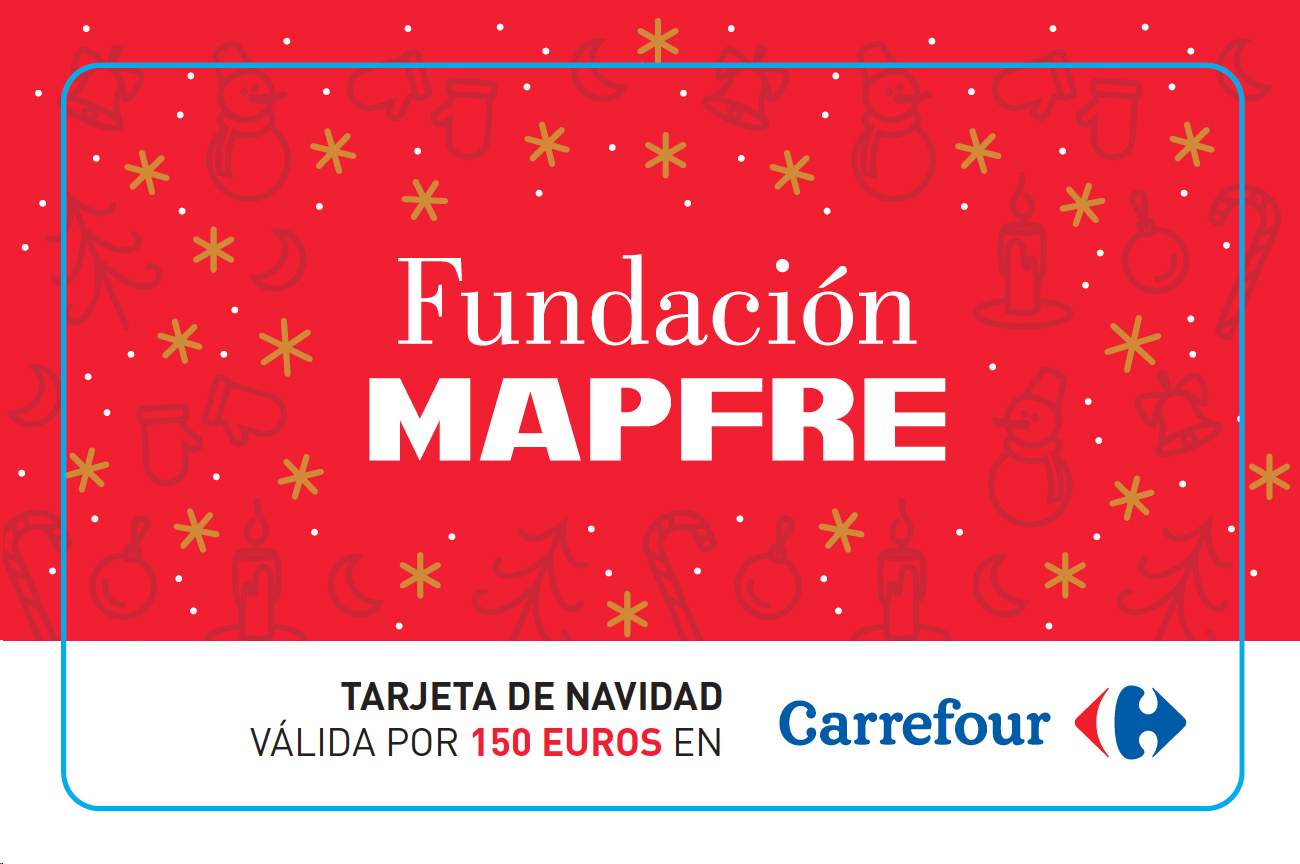 These cards will allow a family to make purchases of clothes, food, basic necessities and toys for a value of € 150 at Carrefour points of sale. This formula dignifies families and individuals by establishing an aid formula that guarantees anonymity and allows meeting the needs that each case requires.

As it is Christmas, these cards will be accompanied by a gift that conveys a message of optimism and hope for the whole family. Will be distributed through 42 social entities, in 40 cities throughout Spain. 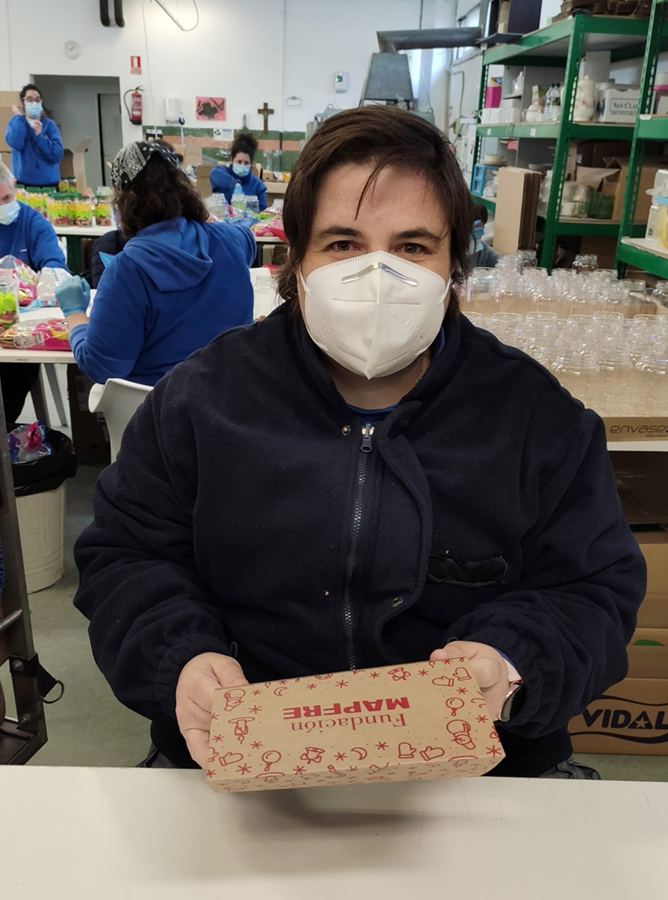 Fundación A LA PAR, committed to people with intellectual disabilities.

The solidarity network has been made up of:
Carrefour, a multinational distribution chain that is considered the first European group. Its mission: to produce the cards.
A LA PAR Foundation whose purpose is the labor integration of people with intellectual disabilities, will produce the packaging and delivery items. This organization, with more than 70 years of history, is committed to people with intellectual disabilities, fighting for their rights and for their participation in society, designing support where they encounter barriers.

Among their variety of programs and services, they have a line aimed at companies, through which they can contract the production of materials, such as in this case, the boxes and interior elements of the promotion.

Fundación A LA PAR, committed to people with intellectual disabilities.

From Fundación MAPFRE, which already has more than forty years of experience, and is recognized as a global foundation of reference for its commitment to the well-being of people and social progress, this time aims to alleviate the situation of vulnerable families with the distribution of these 7000 Christmas cards, with funds to buy food, clothes and toys.

“We are aware that only by understanding the new realities of this changing world will we be able to continue moving forward.” 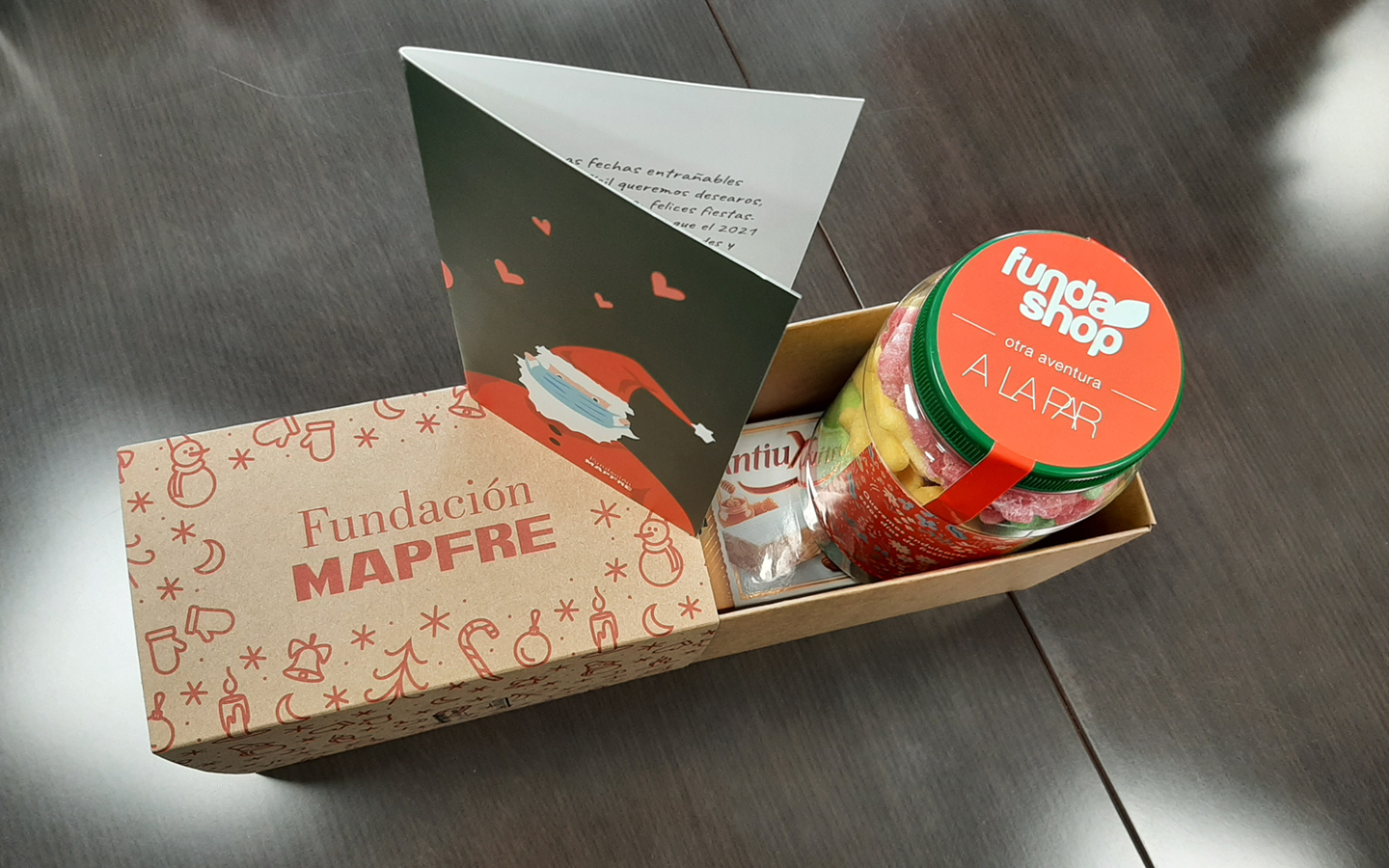 Actions in the community

Fundación MAPFRE will distribute 7000 Christmas Cards to families in need throughout the territory to alleviate as much as possible the difficulties that many people are experiencing as a result of the pandemic that affects us, as well as the acute economic crisis that has ensued. It is a solidarity action that is launched with the aim of managing creative and effective programs, to provide solutions to so many people who had never before been forced to go to any type of public social assistance.

In the Autonomous Community of Asturias, this distribution will be made through the Expoacción association.

In the Autonomous Community of Extremadura, this distribution will be made through the Anfagua association.

In the Autonomous Community of the Valencian Community, this distribution will be made through the associations ACEM Alicante, ACEM Castellón and Casa Caridad.

In the Autonomous Community of Murcia this distribution will be made through the Jesús Abandonado association.

In the Autonomous Community of Aragón, this distribution will be made through the AMASOL association.

In the Autonomous Community of the Balearic Islands, this distribution will be made through the Stars and Duendes association.

In the Autonomous Community of Galicia, this distribution will be made through the ASDEGAL and NGO Mestura associations.

In the Autonomous Community of Castilla y León, this distribution will be made through the associations Red Incola, ACEM León and the Centro Integral Atalaya Intercultural.

The most supportive Christmas dinner

Fundación MAPFRE collaborates with a donation of 80,000 euros to the World Central Kitchen Foundation (WCK), whose founder is the Spanish chef José Andrés, to acquire food for the preparation of 30,000 Christmas dinners which will be distributed on December 24th through more than 60 social entities that will deliver them to vulnerable families.

The Fundación MAPFRE volunteers will collaborate in this activity and will help in the preparation and distribution of these menus under the guidelines of the prestigious Spanish chef and his organization on December 21, 22 and 23 in the kitchens of World Central Kitchen from the Santa Eugenia Market, in Madrid.