There were six minutes of brutal violence that in the early morning of July 3 ended the life of Samuel Luiz and from the first to the last Ibrahima Shakur risked his life to try to save the young man from a beating that ended up being fatal. The lifting of the secret that until this Monday weighed on the judicial investigation reveals that the 38-year-old Senegalese man, who along with his friend Makate was the only one of the numerous witnesses to the attack who tried to avoid it, received continuous blows when interposing his body between the detainees and the victim. The judge in the case has also decided to charge five of the six investigated for Samuel’s crime, two of them minors, a crime of attempted murder against Ibrahima, as revealed by those responsible for the investigation at a press conference held in A Coruña.

The crime that occurred on the Coruña promenade sparked an international wave of protests promoted by LGTBI groups because the man who first attacked Samuel called him a “fag”. The instruction does not currently accuse the aggressors of a hate crime because “as of today” the homophobic motivation has not been proven, although it is a line of investigation that remains open, explained José Luis Balseiro, superior head of Galician Police. “That was emerging with the passage of time, with the testimony and other evidence, but it is not finished”, has abounded Balseiro, who has influenced that it will be the judge who throughout the instruction must determine if it is a homophobic crime . 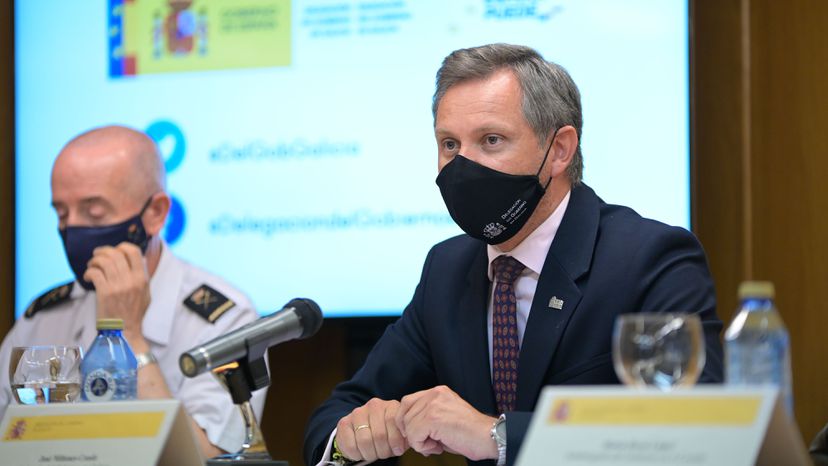 On video, the Government delegate in Galicia, José Miñones, updates the data on the investigation into the murder of Samuel Luiz.EFE

One month after the crime, 41 testimonies have been collected. The reconstruction of the events, through these testimonies, the camera recordings, the records, the analysis of mobile phones and the tracking of social networks, confirms that Samuel’s attackers did not know him and that they undertook it. beating him at the exit of the El Andén nightclub after mistakenly thinking that the victim and the friend who accompanied him were recording them with their mobile. It was a “continuous aggression and in different phases over 150 meters” perpetrated by a “group of friends and acquaintances” between 16 and 25 years old, said the Government delegate in Galicia, José Miñones, between 2.58 and 12 3.04 in the morning.

Two DNA reports also support the accusation against the two main parties involved, the detainee who started the beating and a friend of the latter who left the pub and who, according to the investigation, surprised Samuel from behind. The girlfriend of the first is free with charges, accused of cover-up, and one of the incarcerated is under an accusation of misappropriation, together with that of homicide, because he took Samuel’s cell phone. The investigations have proven that the attackers, in addition to punching and kicking, used a glass bottle. The analyzes that are being carried out try to elucidate whether a metallic instrument was also brandished as a weapon on which no more details have been given and they are looking for DNA remains of the rest of the accused in an article of clothing.

Pedro Agudo, chief commissioner of the provincial brigade of the Judicial Police, has assured that the collaboration of the detainees, three of them imprisoned and the two minors held in a detention center, has been “nil”. Agudo, who has led the investigation, has revealed that the defendants even deleted the conversations they had after the crime from their social networks. For the commissioner, what happened in A Coruña on July 3 “marks a before and after” due to the fact that people with no prior history have participated in the fatal beating. Agudo maintains that Samuel’s crime is not comparable to the one that occurred in Amorebieta: “The people who participated in A Coruña were not classified as criminals.” The investigation remains open and further arrests are not ruled out.