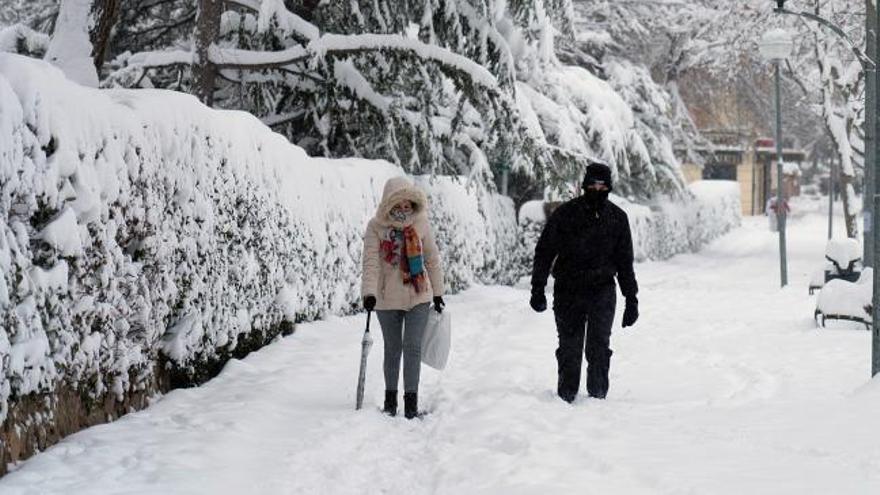 After the snowfalls caused by Filomena, which continue today to a lesser extent in the northwest of the peninsula, where the most complicated situation is in Teruel, The work is focused on cleaning the snow in roads and cities, while the ice begins to appear due to the drop in temperatures.

As of this morning, the arrival of a cold wave is expected, with a marked drop in temperatures as of Monday, with temperatures below 10 degrees below zero in mountain areas and snowy flat areas, affecting points where this circumstance is very rare, according to Aemet.

The President of the Government, Pedro Sánchez, chaired this morning a meeting of the State Coordination and Direction Committee of the national Civil Protection system to evaluate the effects of the storm.

The Minister of Defense, Margarita Robles, has indicated, in statements in Cope, that in Zaragoza the situation is “complicated”, but the greatest risk is in Teruel, due to the effects of the storm in the next few hours and also due to the ice that has settled in many cities once It has stopped snowing and the temperatures are dropping.

The Military Emergency Unit has begun to deploy in Aragon, in the towns of Daroca (Zaragoza) and Castellote (Teruel), before the difficult situation due to snowfall in the Community, where problems continue in almost the entire road network and about 1,900 trucks remain bagged.

The storm Filomena, which caused three deaths this Saturday, one in Madrid and the other two whose vehicle was swept away by a flood between the towns of Mijas and Fuengirola (Málaga), has left roads cut off, impassable streets, impractical accesses, for example in hospitals, and fallen trees.

For this reason, tasks in Madrid and in other cities where it has snowed should focus – Robles stressed – on cleaning, to prevent masses of snow from falling from trees and buildings, although “the most prudent thing” is to stay at home. “and go out only what is necessary.”

This morning, the Filomena pass affected 716 roads, of which 165 were cut off -three of them on the main network-, according to the DGT, which warned of the complexity of the situation in Aragon and of the existence of ice on numerous roads.

The city of Madrid, where a historic snowfall occurred yesterday, is now beginning a second phase of return to normality, which complex is predicted, because the low temperatures cause that the white mantle begins to freeze.

The director of the Security and Emergencies Agency of the Community of Madrid, Carlos Novillo, has asked citizens to avoid any displacement that is not absolutely necessary and that, to the extent of their possibilities and in safe conditions, Help remove snow from driveways or garages to prevent freezing.

Drivers are no longer stuck on the region’s roads, But half a thousand people had to spend the night in different municipal offices, since they could not return to their homes after being rescued from their vehicles.

The mayor of the city, José Luis Martínez-Almeida, has told Cope that the priority is to reopen main arteries to traffic in all districts, although does not believe that “reasonable” mobility can be regained until “the end of next week”, because “it is very difficult” to remove snow and ice from the more than 9,000 streets of the city.

Meanwhile, the members of the Community, the town councils and the Military Emergency Unit (UME) strive to clear the snow, with actions, among other points, on tracks and roads, at the entrances to Mercamadrid and Barajas airport. .

To help citizens reach health centers, the Army participates with its ambulances in the transfer of patients to various hospitals in the Community of Madrid, which they collaborate with the emergency and health services of the region.

National Heritage, after meeting its Management Committee online this morning, has decided to extend the closure of its monuments in the Community of Madrid and in the province of Segovia until next Wednesday, including, as “security measures” for the adverse consequences of the storm.

The Government of Castilla-La Mancha keeps the special road system active due to the storm. The Minister of Development, Nacho Hernando, has highlighted, in a press release, that the “priorities remain the same as from the beginning.”

In this sense, he cites assistance to the health field, preventing people from being trapped on the roads and escorting the teams of health care companies. electricity, water and gas supply so that they can solve the breakdowns as a consequence of the storm.

In addition, he advises not to go out on the roads unless it is “strictly necessary” because ice becomes a “very dangerous and extremely risky” factor.

According to Valencian Agency for Security and Emergency Response, Efforts are focused on reopening the cut roads in the province of Castellón and intensifying the cleaning of roads with salt to prevent ice sheets from forming due to low temperatures.

In Catalonia, the storm left last night without electricity supply to 4,900 customers from the regions of Tarragona and in the Ebro Lands, for which the Endesa company has mobilized generators and has dispatched teams to the territory to locate faults and solve them.

In addition, 14 municipalities in various regions, especially in Tarragona and the Ebro Lands, have been left without mobile phone coverage, while in eight towns of the Priory they also do not have landline service.

Throughout the night, the Firefighters have attended 83 notices for the storm, mainly for problems caused by wind on the central coast, to assist people affected by snowfalls and to conduct road checks in southern Catalonia.