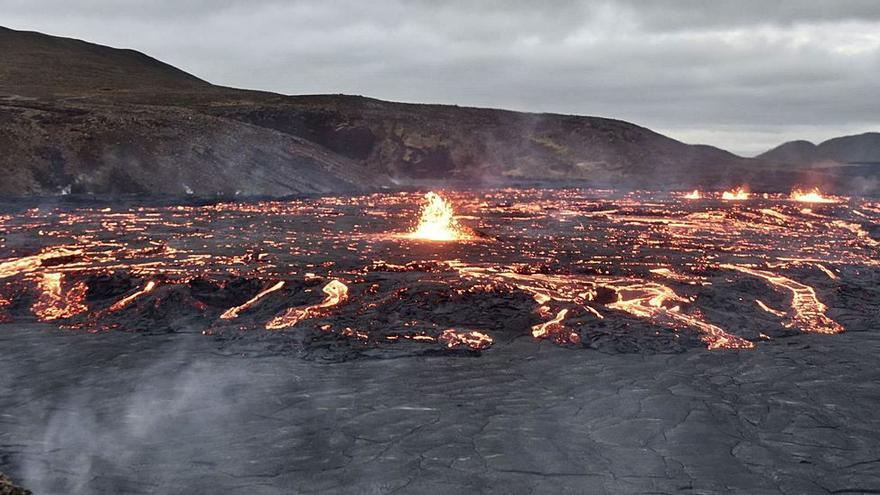 Icelanders are Nordic, therefore organized and meticulous. When the four friends from Oviedo who were visiting the island this month decided to visit the Fagradalsfjall volcano, in the Geldingardelur valley, in the southwest of the island, near Reykjavik and the international airport, We did not suspect that it would be so easy to get to the place where the lava is thrown at extremely high temperatures. In fact, we thought it would be best to hire a guide.

But after a little investigation we saw that it was not necessary. We went on Saturday the 11th in the afternoon, to get dark in the place, because the first darkness greatly highlights the color of the lava. We arrive at a large dirt car park, created for this purpose, crowded with vehicles, and immediately we begin the perfectly signposted approach path. The posters proposed three different accesses and in all of them they indicated the time it would take to reach the closest view of the volcano. A wide path, deliberately opened to access the place, which goes up a gentle hill. A little over an hour later we were on the hill from which the eruption was already visible in the distance. Along with hundreds of other visitors, we walked among rocks, on a quite comfortable ridge, until we got close to the culminating point. There were citizens from half the world there.

The sight of the volcano shudders and captivates. In Iceland they allow you to get closer to the lava river although they advise not to stay long in its environment due to the gases it emits. You can see that it is an island used to this type of event. (In April 2010, the Eyjafjallajökull eruption collapsed air traffic – about 100,000 flights canceled – because of ash above the skies over Europe.) This one doesn’t seem as intense. The road that leads from Grindavik, the nearest town, to the south of the island, may have to change its route because of the lava that follows its path inexorably, although in recent weeks progress seems to have slowed down.

Vik, a small very touristy town in the south of the island. / Mario Bango

The volcano is the latest attraction on a surprising and captivating island. In the crisis of 2008 it had a bad time due to the collapse of its banking system, but it was rebuilt and then opted for tourism, which has become a very important source of income. It is an independent Republic – it achieved autonomy from Denmark in 1918 and independence in 1944 – with a small population, less than 400,000 inhabitants, and Nordic customs. Everything is labeled in Icelandic and English, the latter language that serves perfectly to function on a day-to-day basis.

“They hired me for the job because I know English,” says Anna Martí, a Catalan archaeologist who we discovered in Vik, a small very touristy town in the south of the island from which you can access some of the most interesting glaciers. “Here we are about 300 inhabitants and there are at least seven Spaniards working in the sector,” he adds. Certainly, the increase in the number of visitors has stimulated the creation of numerous establishments – hotels, restaurants, guides, etc. – dedicated to this purpose, which are needed by professionals.

A view of Reykjavik. / Mario Bango

Iceland is a habitable territory on its coasts thanks to the Gulf Stream that tempers its climate, although the wind blows strongly and aggravates the conditions. In fact, temperatures fluctuate little, between 14 degrees on average in August and -2 in January. “There is tourism here all year round, mostly American, although now there are more and more Europeans in summer and more Asians in winter”, highlights Anna, who came to the island with her boyfriend, also a Catalan, a guide on the glaciers.

The interior of the island is an arid plateau, between volcanoes, lakes and glaciers. Impracticable. To circulate through it you need experienced guides and off-road vehicles. The centers of interest – geysers, waterfalls, certain volcanoes such as the one that inspired Jules Verne for his “Journey to the Center of the Earth” – are well signposted and have all the services in their surroundings. Perfect for the traveler who does not want to take risks. The adventurer has the whole country for extreme experiences, including breathtaking waterfalls like Gullfoss.

More than half of the Icelandic population resides in Reykjavik, a city the size of Oviedo, but very large, modern and rich. It is a welcoming place in which it is clear that it is a peaceful country, regulated, orderly and without great surprises, which was very poor until the 20th century. Now it is among those with the highest per capita income, it has a very advanced social protection system and its main activity is fishing, although it also has industries such as aluminum production. And its great strength is precisely energy: almost all of it is of natural origin (its hot water pools are famous). There is no problem with the electricity bill at the end of the month.

But if something stands out in the visit to the island, it is undoubtedly their concern about environmental deterioration. Climate change affects them fully and they remember it well in all affected places, especially in glaciers, which are in permanent retreat due to rising temperatures. Icelanders are very sensitive in this matter. And they may be right. The island leaves no one indifferent, between the extremes: from incandescent fire to perpetual ice there is a wide intermediate range – volcanic lands, large meadows, rugged mountains, mostly unproductive lands – that captivates those who have a sensitivity for nature.