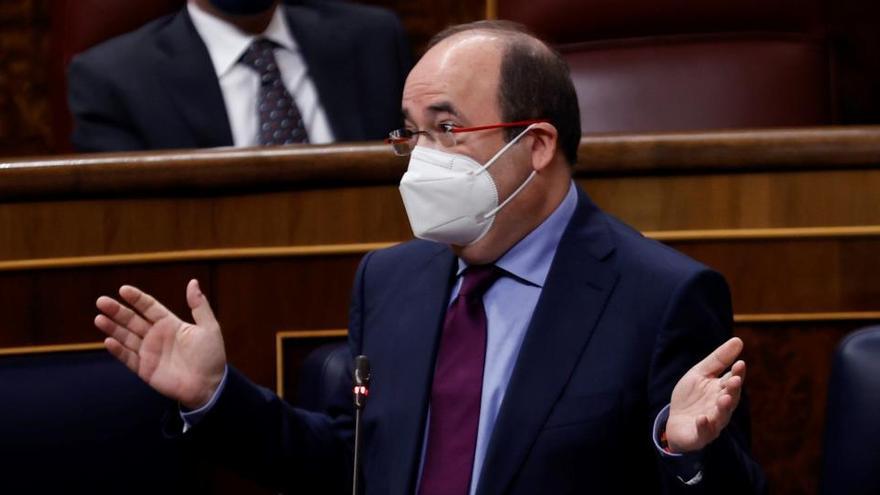 The Minister of Territorial Policy and Public Function, Miquel Iceta, has proclaimed at its premiere in Congress its commitment to the Constitution, “in which all Spaniards fit”, has defended its duty to dialogue in Catalonia and has vindicated the Government’s commitment in this region regarding investment in the General State Budgets (PGE).

This is how the new Minister of Territorial Policy has responded to various questions asked by the PP deputy Marcarena Montesinos, the Junts parliamentarian and candidate of this party for the elections in Catalonia, Laura Borrás, and the leader of Citizens, Inés Arrimadas, who returned to coincide with Iceta after leaving the Parliament of Catalonia to make the leap to national politics.

Specifically, the president of Ciudadanos wanted to ask Iceta for explanations about his role with Catalonia at the head of the Ministry. At this point, Arrimadas has reproached the Government for agreeing with ERC to resume the dialogue table with the next Catalan Executive because, in his opinion, this implies a pact with the republics to form a Government.

Here, Iceta has insisted on the path of dialogue between the central Government and the Catalan Executive, and has claimed that since there is a coalition government between PSOE and United We Can, There has been no incident in the Catalan Parliament related to the separatist process.

“That is not just our merit, but something will have to do the dialogueWe are aware that it can happen again, but of course it will never be at our initiative. This Government is only going to be in the dialogue that conforms to the legality, “Iceta stressed.

“We all fit in the Constitution”

Iceta opened this Wednesday in a control session in the Lower House with a question from a PP deputy, who reminded the minister of his statements about the eight nations in Spain and the Right of some Autonomous Communities to self-determination.

The minister has responded to this by ensuring that his political acts have been framed “in the Constitution”, which, as he has said next, will be his execution as head of Territorial Policy and Public Function.

This response has found its reply on the part of the deputy Montesinos, of the PP, who has indicated that Iceta has assumed the ministerial portfolio “as a consolation prize” and He has accused him of being the “ambassador” of those who defend self-determination.

“I see them far from the Government, because having such a pejorative concept of ministerial positions, it is possible to understand that they see it as very complicated,” answered Iceta, who has assured that, in his concept of Constitution “all Spaniards fit.”

Iceta has starred in Congress in another debate with the candidate of Junts to the Catalan elections, Laura Borrás, who also says goodbye as a deputy with this question in which she has asked the minister for explanations about the Government’s commitments to Catalonia.

In this sense, Iceta has defended that with Catalonia, as with the rest of the Communities, “there is a desire to collaborate of this Government of joint work at the service of the citizens “.

The Junts candidate has complained about the investments for Catalonia that appear in the Budgets approved for this year 2021. “The list is long, she will not be able to plead ignorance, surely incompetence,” Borrás has sentenced.

Finally, Iceta has stressed that the Budgets comply with Catalonia and has called to speak with ERC, which approved these accounts. Likewise, the also leader of the PSC has indicated that the central Executive “needs in Catalonia an interlocutor committed to dialogue.”