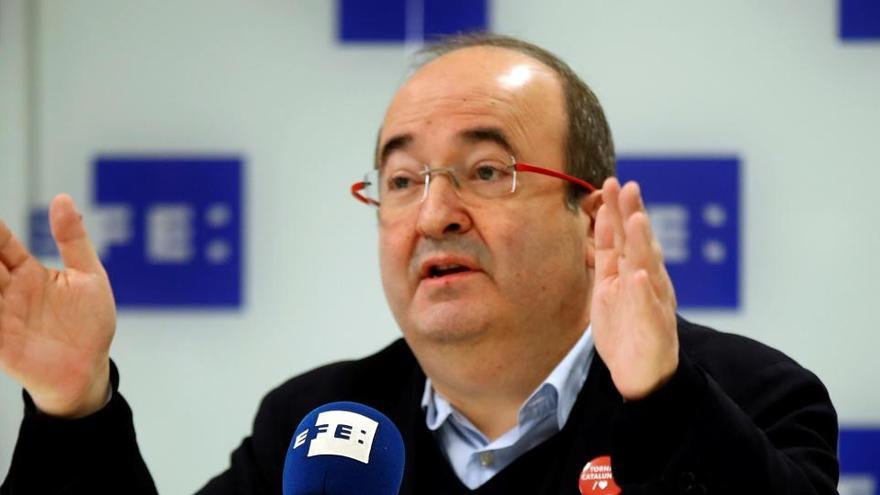 The first secretary of the PSC, Miquel Iceta, has affirmed this Sunday that he will not change his federalist ideas nor is it going to stop considering Spain a nation of nations “to access a ministry”, an option on which there is speculation since Salvador Illa gave way as a socialist candidate for the Generalitat

When asked about it in an interview with Efe, the leader of the Catalan Socialists has maintained that he does not know if his future lies in the Council of Ministers, as various media have pointed out in recent days, that place you in the portfolio of Territorial Policy, currently occupied by Carolina Darias.

“This is not up to me. I find it every day in the newspapers and I quickly look to see if anyone has seen it in the Official State Gazette, which is where these things have to appear, “said Iceta ironically.

And he added: “Everyone knows that now I am absolutely involved in the campaign to make Salvador Illa president and everyone knows that I am at the disposal as always of my party, the president (Pedro Sánchez) also knows it. People know what I can and cannot do, and if the question arises then we will address it. ”

Although he emphasizes that he does not know if his future is in state politics, Iceta has affirmed that if the eventuality occurs, it will maintain its federalist postulates.

“I have written work on the matter. As well as in some subjects one can be modifying a lot, but in a year as close as 2017 I made a book called ‘Third way. Bridges for the agreement’, which for me continues to have full validity. Therefore, I am not going to change my ideas to access a ministry, It is not in my plans to make this type of turns that in some cases have been seen, “he remarked.

In fact, he has claimed that the defense that Catalonia is a nation fits with the current legal framework, since the Constitution states that in Spain there are “nationalities and regions”.

“If nation is synonymous with State, because the State is Spanish, which is the one that guarantees citizenship and equal rights and duties. But if nation is a feeling of identity, why not? I believe that Spain is a nation of nations, I have always defended it and I will continue to do so, “he resolved.

Regarding the Catalan conflict, Iceta has asked to separate the political negotiation and the electoral debate from the processing of the pardons requested for the independence leaders condemned by the procés.

Likewise, it has played down the importance of some of the prisoners using the slogan “we will do it again” in his public interventions.

“If ‘we will do it again’, we will be condemned again. I believe that many times it is said that we will do it again, not so much thinking about doing the same thing that has already failed dramatically, but that we will continue to be independentists. And to this, it must be said with all the letters, they have every right. No one has to be forced to change their ideas or their political project, “he specified.

Although he refuses to comment on whether or not the Government has to grant the aforementioned pardons, the PSC leader has conceded that “It is clear that we must heal wounds in Catalan society”, both among the independentists and among those who are not.

Also Read  Get out of Hong Kong before it's too late, say those who now call Britain home | Hong Kong

In the political sphere, Iceta has claimed the usefulness of the dialogue table – fruit of the pact between the Socialists and ERC for the investiture of Pedro Sánchez – for channel the Catalan conflict.

The solution in Catalonia, he believes, is to improve financing and to expand self-government from cooperation and institutional loyalty, intensifying the role of the Generalitat in shared decisions and avoiding the “interference” of the State in the autonomic competitions.

Along the same lines, it considers that the territorial fit in the State as a whole will be improved when co-governance is extended, which already is being practiced with the management of the pandemic of the covid-19 and that “empowers the autonomies”.