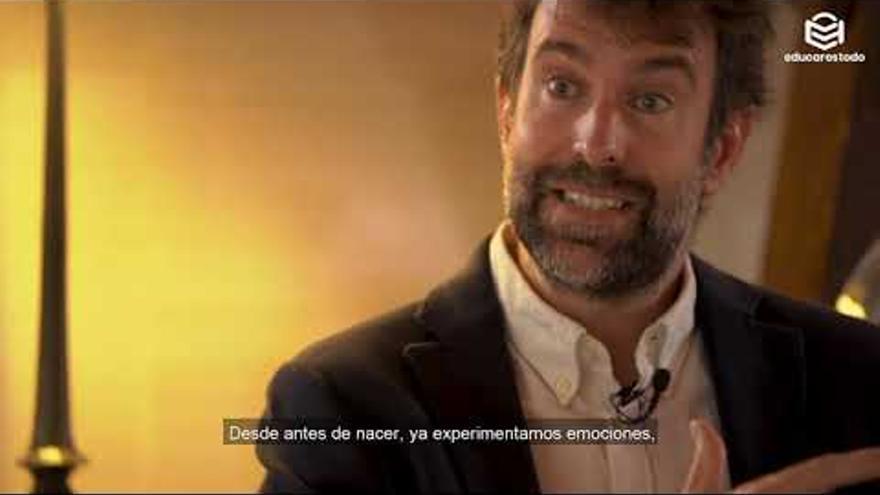 Many times, mothers and fathers do not understand why our children behave in a certain way. The reason is that we don’t know how your brain works. We do not understand that at their age, there are certain things that, from a cognitive point of view, they cannot do. And others that, on the other hand, can only be done in one way, although it is not always the one we would like. To help us understand our children, the psychologist Rafa Guerrero has just published a book: ‘The child and adolescent brain. Keys and secrets of neuroeducation ‘.

Rafa, why is it so important that we know how the brain of our children works?

The fact that mom and dad know, even in a very basic way, how the brain works, can give them some basic guidelines to better understand their children. If I see that my son is in a tantrum or my adolescent does not want to talk to me, and I am able to get into his brain, see what kind of connections are taking place or which are not taking place, I will be able to do an attribution a lot better adapted to what is happening. That sometimes what we say is: “there is no one who understands this child.” If we know how the brain functions, we will be able to better interpret their behavior and, looking to the future, we will be able to implement more realistic goals. We are not going to ask our children to achieve goals for which they are not prepared due to their abilities or due to their vital moment.

Could you give us an everyday example in which we can understand how, if we do not know the functioning of the infant brain, we are not going to react correctly?

One of the issues that worries mothers and fathers a lot is tantrums. When they reach that age, between 2 and four years old (it depends on the child) we find that children go through a phase of tantrums. The fact that I understand what is happening in my son’s brain when he is in those moments, does not allow to be more calm and take control. When we say ‘no’ to a child, when we do not allow a child to do something or have to do something that they do not want to do, at that moment they can go into rage. If we dive into the brain, we find that the brain’s tonsils have fired and begin to release two substances: adrenaline (invites action) and cortisol (the stress hormone that prevents us from thinking). Therefore, at that moment, in which the child is in full rage, what happens is that he is tremendously emotional and little thinking. We try to get him to think, to reason, to come to his senses, but he can’t.

Also Read  A world that repeats itself in catastrophe | Opinion

“We try to make a child in the middle of a tantrum come to his senses. This is cognitively impossible” Rafa Guerrero – Psychologist

What else do we ask our children to do and cannot do?

Many. For instance, We ask our children to concentrate at two when a two-year-old cannot concentrate. You can attend, but not concentrate. Attention is a process in which the stimulus captures me, but concentration is an executive function that has to be learned and developed. We adults who have to encourage this executive function to develop. To teach a young child to concentrate I have to model and give them instructions. How? If you want to color a drawing, I’ll tell you that first you have to choose the color you want for the hat, then take it from the case and then go coloring trying not to get out of line … With planning, the same, with regulation emotional, the same …

Yes, we have more neuroscientific studies on how the brain works in children than in adolescents. But, even so, we have a lot of information that allows us to sensitize adults about how important it is that they know what a teenager’s brain is like, which will allow them to better understand their behaviors. I always say, metaphorically, that a teenager’s brain is like a cell phone that is resetting itself. Let me explain: when I update my mobile, the phone stops working. I can’t make calls, I can’t receive WhatsApp messages, I can’t access the Internet. But, once the phone has been updated, what I have is an improved version of my mobile. This is what happens in the brain of a teenager. The difference is that the mobile update takes a few minutes, and the brain update takes a few years, and this makes mothers and fathers desperate. Adolescence is that stage in which a part of the brain is “in the works.” This explains why adolescents are very emotional, challenging, they like novelty, because the part in charge of reasoning, controlling emotions, concentrating, planning… is under construction and is therefore not available.

“The brain of a teenager is like a mobile updating itself, that is why their behaviors are strange to us”

How can mothers and fathers do to promote proper brain development of our children?

When we talk about education, I like to say that there is no neutral context, that is, that everything we do with our children subtracts or adds in their development. Let me explain: our children are, again metaphorically, a building that, genetically, already comes with the foundations, but we have to build on it. If we adults do a good enough job, we will build a healthy brain, but if we are not able to empathize with it, we have difficulty regulating ourselves emotionally, we do not tune in to its needs (including affective ones) and, therefore, we do not cover them, we are going to build an unhealthy brain.

You speak in the brain glue book. Something that we parents have to make and without which our children will not develop a healthy brain. What are the ingredients of this glue?

You don’t buy brain glue from Amazon, it’s made at home, and it’s what makes up a healthy brain. The ingredients of this brain glue are: protection, autonomy, connecting with their emotions, spending time, helping them regulate their emotions, empathy … All this put in a bowl, forms the brain glue. And it has to be done every day at home. It is not worth doing a lot a day, and no more. Children who grow up without this brain glue will have difficulty concentrating, regulating their emotions, impulsivity … These children can develop academic difficulties that we can confuse with ADHD, and not be.

At 2 years of age, it is as normal for our children to have a tantrum as it is for them to pee on each other, but the former sometimes we don’t understand

Rafa, you say in the book that we have to teach our children to differentiate emotion from behavior … What exactly do you mean?

From before being born, we already experience emotions, and we already feel them at the brain level. Emotions are innate, we cannot help feeling them. But it is one thing that I experience an emotion, and another is that I learn to stop it, that I learn to postpone it, or that I regulate myself emotionally, and this is something that is learned. What happen? That our little ones do not have emotional regulation capacity, they have to learn it. They feel an emotion, such as anger, sadness, fear and, as they do not have enough capacity to regulate, because their prefrontal cortex (the area that regulates emotions) is not mature enough, nor does it have enough practice to become In charge of that emotion, it needs an adult, who does have that prefrontal cortex, to regulate it. What we have to teach our children is that emotion is always legitimate (it is normal for you to be angry), but behavior must be valued (I cannot allow you, because of your anger, to push your sister). A child who learns to regulate himself emotionally will be an emotionally intelligent adult. And we only go to self-regulation if someone has previously helped us to regulate ourselves, that is our role as parents.

“The WHO recommends zero screens up to 2 years, and I, who know how the brain works, usually extend this recommendation until 6 years”

Rafa, how do screens affect the brain development of our children?

Technological devices came into our lives years ago and, on many occasions, they facilitate them, but they are like a car, misuse of the car can be catastrophic. The same thing happens with screens. Each family has its coordinates, but it is true that technological devices do not help to build those foundations of which we spoke before. And when I say devices, I also mean TV, not just tablets, mobiles or video consoles. The WHO recommends zero screens up to 2 years, and I, who know how the brain works, usually extend this recommendation until 6 years. Because in these first six years is when there is a greater brain development. Consequences? A child who abuses devices is detrimental to their concentration, their ability to control impulses, difficulties in planning, they find it harder to think, more irascibility …