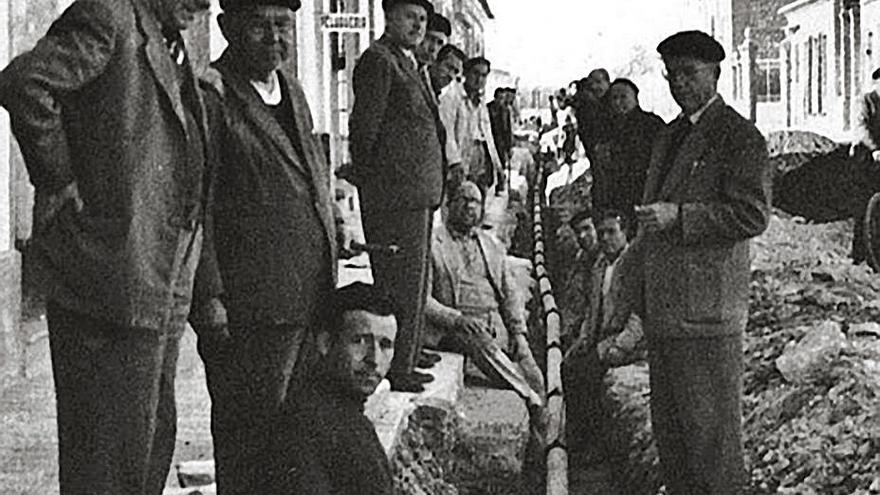 At the beginning of the 19th century, Joseph Montesinos mentioned cisterns that collected rainwater, coming with carts and large barrels, from two and three leagues from Torrevieja, on the farm today called “El Pozo Dulce”; It also explains that its neighbors were supplied in addition to cisterns, trying to collect it when it rained and transporting it from the referred well of La Mata, driven by men and transporting it with carts, in barrels that until the sixties of the last century crossed the streets of the city, pulled by a mule.

On May 17, 1867, the governor reported that, for the installation of the drinking water conduction and public fountain that José Sánchez intended to carry out, it was mandatory to carry out the appropriate file and work project. On December 19, 1892, the canalization of the waters of the La Mata mill farm was inaugurated, with a large gathering of neighbors attending the event, the waters being blessed at the sound of music and ringing of bells, before the businessman from Murcia Antonio Hernández Curly. A total of six fountains were installed in Torrevieja: that of San Antonio, in Labradores street –now Campoamor– with Empecinado –now Patricio Pérez–; the San Ramón fountain, on Lacy street – (today Chapaprieta – with La Paz; the San Luis fountain, on Caballero de Rodas street with Apolo; the San José fountain, on Apolo street with Ulpiano; the Soledad fountain, in the Plaza de las Barcas –now Castelar– and the Acequión Fountain, in calle del Loro –now Gabriel Miró– with San Policarpo.The installation was carried out with pipes from a gas factory in Barcelona.

In 1917, due to non-compliance, the water supply contract was rescinded, since supply cuts and pipe breakages had been constant, with several of the sources having stopped working, having to once again resort to distribution by carts. A year later, the supply of supply for the population was granted to the company owned by José Hódar Vallado, from Motril, then owners of the waters of La Mata. The duration was stipulated in ninety-eight years, in exchange for giving free to the city council forty-five cubic meters per year. In 1924, Unión Salinera de España SA acquired the property of the farm, as well as the supply rights.

In 1951, due to the termination of the concession to the State of the waters of the La Mata Water Mill, the facilities had to be formally handed over to the City Council, who, in 1957, ceded to the New Tenant Company of the Salinas de Torrevieja and La It kills everything related to the water supply, both its properties and facilities.

In 1959, due to the obsolescence of the networks, the City Council being unable to sustain the situation any longer, and not being able to obtain flows from the Mancomunidad de los Canales del Taibilla, on May 21, in a meeting held, by its executive committee proceeded to the award of the water conduction project to Torrevieja, agreeing with the New Leasing Company of Las Salinas the administration of the supply of water from the state-owned farm, known as Aguas de Torrelamata, for the supply of the population.

On August 5, 1959, for the first time the water ran through the pipes to the houses of Torrevieja, although it was not drinkable. On January 14, 1960, the works began to install new fiber cement pipes, replacing the previous ones, installed in 1890.

In 1961, the bases for the operation of the Municipal Drinking Water Service of Torrevieja were drawn up, and approval could not be obtained as the municipalization of the service was not effective as both the water and the supply and distribution networks were property of the State. On July 25, 1962, a new enough water distribution service was inaugurated for all of Torrevieja, that yes, it continued to be somewhat salty, due to the overexploitation of the La Mata aquifer.

The increase in population, especially in the summer season, caused supply problems, forcing, in 1965, the City Council to convene an urgent meeting for the creation of the Administrative Commission for the Water Supply of Torrevieja, carrying out the execution and development of projects and measures aimed at providing the population – which had more than a thousand subscribers – with networks and accumulation tanks.

On July 21, 1965, at 9 o’clock in the afternoon, drinking water from the ‘Lolita’ well of the ‘La Chismosa’ farm finally arrived in Torrevieja. On July 30, after the first operational tests were carried out, “fresh water” finally came out of the taps thanks to the work of Councilor José Samper and the enthusiasm of the entire town in solving the water problem, being approved, for the first time the rates for the home supply of drinking water, leading to the disappearance of the carts with barrels and the tanker trucks of the transporter Rafael Ros, which until then provided the home delivery service of the Taibilla water.

In 1970, water did not seem a pressing problem due to the growth of the population in the summer seasons, it did seem to herald the necessary expansion of the supply of the drinking water network and especially its supply. In the spring of 1971, the water from the Taibilla reinforced that coming from the La Chismosa farm. The Mancomunidad de los Canales del Taibilla put into operation a pipeline from La Pedrera, as well as an accumulation tank.