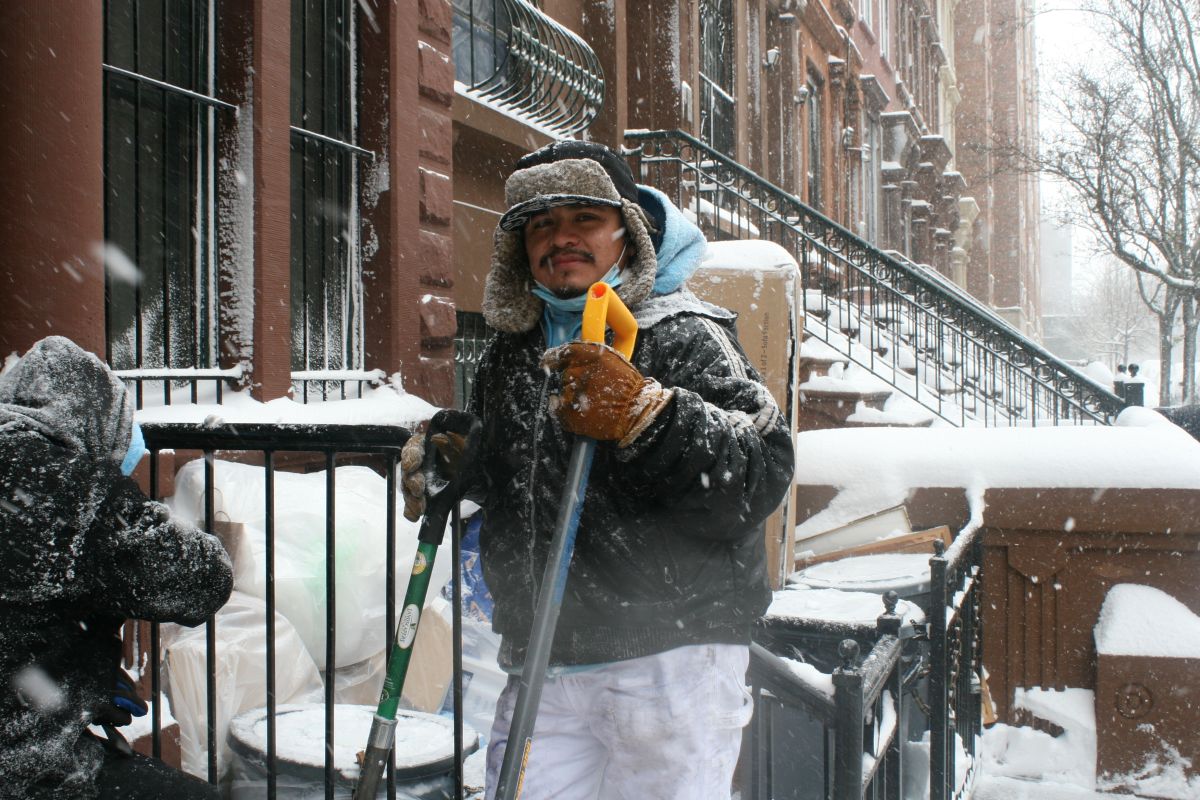 The Mexican Hugo Hernández works in a maintenance company, this Thursday he had to shovel from the early morning.

The first winter storm in the era of the coronavirus pandemic that affected the Big Apple between Wednesday and Thursday, and what faith the strongest in the last five years, It also meant a ‘relief for the pocket’ of thousands of casual workers who found since the early hours of this Thursday, options to “shovel” tons of snow in all five boroughs, in the midst of an unemployment crisis that has ‘frozen’ the economy of many families.

“I left at 5:00 in the morning because there are a lot of small buildings here in Harlem that generally need help. For a few weeks there was no job. The bad thing is they pay well below the legal $ 15, But it is preferable to come home with something tonight than empty-handed, ”he said. Cristhofer Jiménez, 40, an immigrant from Guatemala who says that the COVID-19 crisis you have ‘frozen’ your income.

Like Cristhofer, hundreds of day laborers went out even since Wednesday night to “look for life” when the persistent snowfall rose in total averages of 10.5 inches in the Bronx and 8.5 inches in parts of Manhattan.

Another unemployed young man 28-year-old Miguel Sacca, originally from Honduras, with just one year in New York indicates that he has made his “good bucks” removing the ice from dozens of cars on 125th Street and Manhattan Avenue.

“This fell from the sky. I work at a restaurant in the Bronx and they closed it on Monday. I think today I do at least the day and there are more days of work with the snow. I saved the week! ”, reacted.

More snow than in all last winter

At out of Harlem, as in the rest of the city, hundreds of vehicles were covered over, streets were blocked and shops began to open their doors after the midday.

“Everything is very lonely. There are almost no sales. It is normal, the neighbors prefer to be quiet because fear of falling, especially the customers around here who are older people ”, commented an employee of the Deli Winery in Harlem while scattering anti-slip stones in front of the store.

Likewise, the Mexican Hugo Hernández works for a maintenance company and by noon there was a lot of snow that had been removed from the sidewalks of the 126th Street and St Nichola Avenues together with his peers.

“We had to make space for people to get out of the buildings. First time I see so much snow”Said the native immigrant from Hidalgo, with three years in New York.

Indeed, New Yorkers saw more snow fall in the past two days than they did all of last winter, according to meteorologists.

Just after midnight on Thursday 6.5 inches of snow and sleet covered Central Park, which is more than the 4.8 inch that were seen in the winter season 2019-2020.

“It was intense and wet”

The commissioner of City Emergency Management Deanne Criswell, described that the storm was more “noble” than forecast “but we still had a heavy and wet snowfall, and that is causing some quite difficult conditions,” he said.

For its part, the Dominican Pedro Hernández who works for a hotel in Upper Manhattan, with the help of a machine, kept for hours cleaning almost an entire block.

“I have been here for four years and really the first time I have seen such a long snowfall. This morning I was soaring they were mountains, but here we continue with enthusiasm, it’s part of the job, ”said the islander.

Aftermath of the storm in NY: